Welcome to the DNC’s new Battleground Brief — a weekly wrap-up of Trump’s broken promises and everything you need to know across the path to 270.

SEE YOU IN THE BUCKEYE STATE (JENI’S OR GRAETER’S?). We’ll see you in Ohio for next week’s Democratic presidential primary debate. We’ll be talking with Ohio leaders about Trump’s broken promises on health care in a key suburb of Columbus (one of the six suburban state House districts Ohio Democrats flipped last cycle).

WHAT TO KNOW ABOUT WESTERVILLE: CLEVELAND.COM: IN WESTERVILLE, OHIO, DEMOCRATS PICKED A SUBURBAN PRESIDENTIAL DEBATE SITE THAT IS TURNING BLUE. “Voting trends show that Westerville is a solid example of rising Democratic popularity that stretches across the Columbus suburbs.”

NEXT UP, GEORGIA. BLOOMBERG HEADLINE: GEORGIA IS SUDDENLY IN PLAY FOR DEMOCRATS IN 2020.

BLOCK BY BLOCK: WISCONSIN DEMOCRATS BUILD NEIGHBORHOOD TEAMS, FROM THE AP: “Wisconsin Democrats started rebuilding their neighborhood teams in the spring of 2017 and now have 250 operating across the state. Those teams knocked on twice as many doors ahead of the 2018 election than the Clinton field operation did in 2016, said state party chairman Ben Wikler. He calls it the Democrats’ ‘secret sauce.’”

PEREZ IN TEXAS: “THE PARTY OF LINCOLN IS DEAD.”

NV DEMOCRATS ANNOUNCE NEARLY 80 SITES TO VOTE EARLY IN CAUCUS, FROM THE NEVADA INDEPENDENT: “An advance list of 15 early voting sites obtained by The Nevada Independent reveals the focus the party is putting on ensuring that communities of color and other underrepresented communities have access to the party’s first-ever early voting process for the caucus. The Nevada State Democratic Party released a full list of the early voting sites late Monday morning.

MUST WATCH: DNC Chair Tom Perez on MSNBC this week: “We have a president whose North Star is himself. He didn’t call up the leader of the Ukraine to say ‘I need a favor before I can give you this aid. I need you to buy wheat from Montana farmers, or I need you to buy cars from our US workers.’ No, it’s all about himself ” 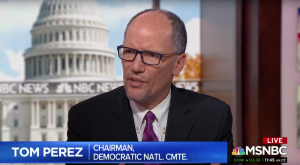 IOWA DEMS “BLAST PENCE.” From the Iowa Starting Line: “With Vice President Mike Pence in Iowa this week, Iowa farmers and different agricultural groups are calling out Trump and Pence for their blatant disregard of the promises they continue to make and break.

‘Rural communities are hurting. President Trump made promises to rural voters that he simply has failed to keep. Farmers and rural Americans cannot keep taking the hits that he places on our economic engines,’ said Pam Johnson, past president of the National Corn Growers Association and sixth-generation Iowa farmer. ‘It has taken years to convince the President to make good on his ethanol promises, and we are still waiting to see if he truly fulfills those promises.’

‘Iowans can see past the GOP’s empty rhetoric, and we deserve answers from Pence and Ernst about how they are going to bring meaningful solutions to farmers’ mounting economic uncertainty,’ explained Troy Price, Iowa Democratic Party Chair. ‘We need leaders who will listen to farmers and energy producers, take these issues seriously, and work towards a comprehensive solution that expands our economy and restores our farm safety net. Not more broken promises and uncertainty. That’s the kind of leadership Iowa Democrats are working to bring up-and-down the ticket in 2020.’”

And make sure to follow the DNC’s War Room (@DNCWarRoom) to get real time updates on Trump’s abuse of power and more broken promises.