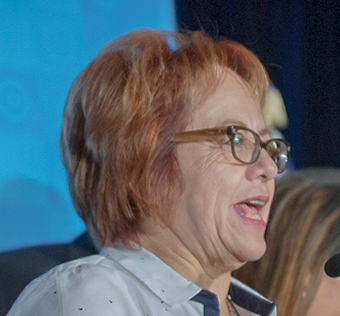 Maria Elena Durazo has served as DNC Vice Chair since 2013.

Maria Elena is Vice President for UNITE HERE International Union, which represents more than 270,000 hospitality workers in the U.S. and Canada. Under her leadership in 2016, UNITE HERE and its Las Vegas local, the Culinary Union, led an unprecedented citizenship drive, helping more than 2,000 residents apply for citizenship. This campaign launched the union’s large-scale door-knocking campaign in Nevada, the only swing state to go blue. In Phoenix, Maria Elena and UNITE HERE helped lead the campaign where voters defeated the anti-immigrant Sheriff Joe Arpaio, opening the door for the state to go Democratic.

In her home state of California, Maria Elena and her late husband, Miguel Contreras, led grassroots efforts in the 1990’s and early 2000’s to organize immigrant workers, a campaign largely credited with turning California blue.

Maria Elena started organizing with the Hotel Employees and Restaurant Employees Union Local 11 in 1983, and was elected as President in 1989. From 2006 through 2014, she was the first woman Secretary-Treasurer of the Los Angeles County Federation of Labor, AFL-CIO, the second largest labor council in the country and served on the National AFL-CIO Executive Council.