After saying he would not take vacations, today marks the 47th day Trump has spent at one of his golf courses and the 62nd day at a Trump-branded property during his presidency. By the end of his “working vacation,” Trump will have spent one-third of his presidency at one of his properties. Trump’s vacation shows his hypocrisy and is a burden to residents and taxpayers. His frequent trips have already cost taxpayers millions and he is on pace to spend more on travel in his first year than President Obama spent in all eight years of his presidency.

But remember, Trump is definitely not on vacation… 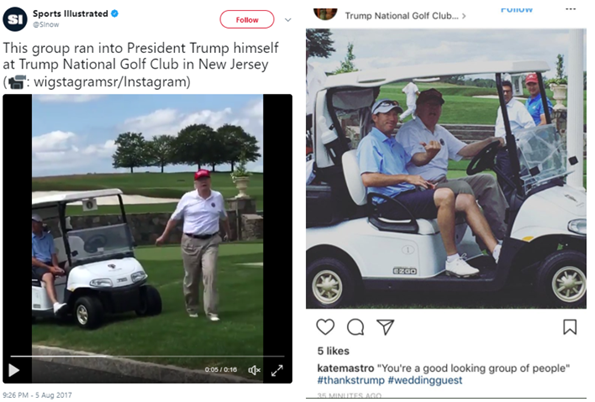 Trump’s Bedminster vacation is burdensome for residents of the New Jersey small town.

Reuters: “As Bedminster prepared this week for the president's latest trip to the 600-acre (240-hectare) private club, a 17-day stay that is his first extended vacation in office, some of the town's 8,000 residents expressed frustration at the security protocols, road closures and daily disruption that will begin with his arrival on Friday.”

Trump’s trips to his properties have already cost taxpayers millions of dollars and his Bedminster vacation will cost an estimated $3.2 million alone, according to one study.

Center for American Progress: “Trump's August Bedminster trip costs an estimated $3,246,698.06, which includes the same roundtrip flight cost as the three day trip, as well as Bedminster township costs, DOD and DHS per diems costs, and Secret Service staffing costs all adjusted for an 18 day trip if that's possible.”

USA Today: “The Feb. 5 flight to Houston was part of more than $3.5 million in White House travel that Judicial Watch has reviewed so far under the Freedom of Information Act since the Trump administration took office Jan. 20.”

Trump said he “probably wouldn’t” take vacations as president and that people only took vacations if they did not enjoy their job.

VAN SUSTEREN: “Would you take a vacation now if you were president or are you in the House or the Senate in light of all the demands on all those offices and where we stand?” TRUMP: “I probably wouldn't. I have never been a big vacation person. When I take vacations I go to my places, whether it's Doral in Miami or Los Angeles on the ocean. I can do it in a half a day I've got my vacation.” [On The Record With Greta Van Susteren, Fox News, 8/13/13]

TRUMP: “‘Don’t take vacations.  What’s the point?  If you’re not enjoying your work, you’re in the wrong job.’  — Think Like A Billionaire”

TRUMP: “Work gives every day a sense of purpose. A job well done provides a sense of pride and accomplishment. I love to work. In fact, I like working so much that I seldom take vacations.” [Donald Trump, Time to Get Tough, published 12/5/11]

TRUMP: “Why is @Barackobama always campaigning or on vacation?”

VAN SUSTEREN: “What does — I mean, obviously, that doesn't sound a — send a good message if, indeed, the American people think that he likes a, quote, ‘vacation.’”  TRUMP: “Well, I mean, it sends a bad message. Here we have a country that really is going to hell in a handbasket. Let's not kid ourselves. What's happening to this country is horrible. All over the world, they're talking about it. And we have a president that's constantly — whether it's Martha's Vineyard or some place else, constantly on vacation. I mean, all the time he's on vacation! So I think it sends a very, very bad message. We have to work in this country to bring it back.” [On The Record, Fox News, 8/15/11]

TRUMP: “I You wouldn't think that that is something — that's not something — a P.R. person says, that's not a good time for you to be playing golf. That's really bad. That was just bad. It just looks to me like he is tired of the position. I may be wrong. I hope I'm wrong. He has got two more years as president. To take all these vacations and all the fundraisers, and on our dime.” [On the Record with Greta Van Susteren, Fox News, 10/6/14]

TRUMP: “Obama is on yet another two-day West Coast fundraising swing. Has to fit it in before his 15 day tax-payer funded vacation.”

TRUMP: “It’s Jan. 2. President Obama should end his vacation early & get back to Washington to straighten out the ObamaCare catastrophe—or end it.”

TRUMP: “Congress should get back to Washington, but @Barackobama doesn’t want to interrupt his vacation in Martha’s Vineyard.”

TRUMP: “If Obama is concerned about the border, he should stop vacationing. Gov’t will save millions, which it can use to stop illegal migration.”

TRUMP: “Can you believe that, with all of the problems and difficulties facing the U.S. President Obama spent the day playing golf. Worse than carter”