Trump continues to build an economy focused on rewarding wealthy corporations at the expense of working families. The Trump tax law gave massive new tax breaks to big corporations and did nothing for workers. Now, while corporations just had their best profit gain in six years, real wages for workers continue to decline.

Corporations just had their best 12-month profit gain in six years largely thanks to the Trump tax law.

Wall Street Journal: “The Commerce Department said its broadest measure of profits across the U.S. economy rose 16.1% from the second quarter a year earlier, the largest year-over-year gain in six years. Taxes were a big part of the boost to the bottom line. Taxes paid by U.S. companies were down 33% from a year earlier, according to the new government data, or more than $100 billion at an annual rate.”

Meanwhile, real wages for workers have continued to decline and large corporations are raising prices on consumers.

Bloomberg: “By pouring hundreds of billions of dollars of tax cuts and extra government spending into an already stretched economy, Trump is fostering an environment where firms such as conglomerate 3M Co. can raise prices because demand for their products is strong.” 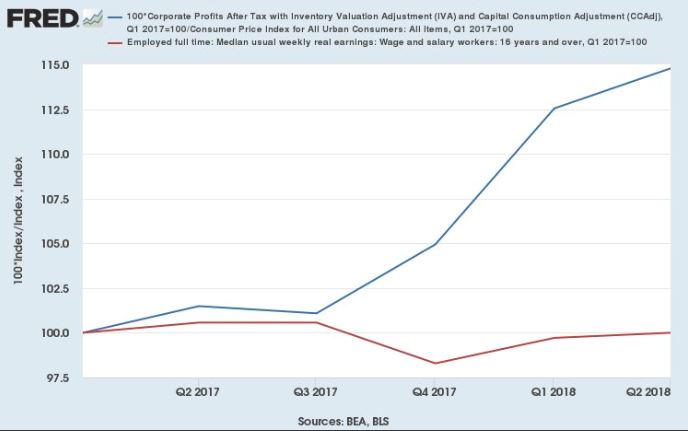