NEW: DNC EXPANDS BATTLEGROUND BUILD UP WITH NEW TRANSFER, HUNDREDS OF ADDITIONAL ORGANIZERS. Today, the Bloomberg campaign announced it has made an $18 million transfer to the DNC to support the Battleground Build-Up 2020 program and continue organizing in key states, funding hundreds of organizers. Beating Donald Trump has never been more critical and we are building the infrastructure to put a Democrat in the White House and win races at every level of the ballot. What they’re saying:

@amandalitman: This will mean the DNC can hire up a *lot* of staff, which, especially right now, is a good thing.

@guycecil: Wow! This is a game-changer for the DNC and the right thing to do to build the Democratic infrastructure for the general election. Thank you @MikeBloomberg

@brianefallon: This is an elegant solution that eliminates redundancy, will be high-impact, and generates a ton of goodwill within the party. Very smart

@MariaTCardona: Great news from @TheDemocrats @MikeBloomberg! A huge $18 million investment from the MB campaign will now go to the DNC to allow them to grow a robust field operation in battleground states to defeat this inept and dangerous @POTUS in November!

COMING UP ON MONDAY: ACA IS 10, AND NOW MORE THAN EVER HEALTH CARE IS ON THE BALLOT. Monday marks the 10 year anniversary of the passage of the Affordable Care Act. Since he took office, Trump’s agenda has jeopardized coverage and spiked costs — stay tuned on Monday as battleground Democrats talk about:

PROTECTING THE VOTE: DEMOCRATS FILE LAWSUIT TO EXPAND VOTING ACCESS IN WISCONSIN. The Democratic National Committee and the Democratic Party of Wisconsin filed a request in the Western District of Wisconsin to expand access to voting in response to the growing coronavirus threat. By implementing these measures, the state can ensure that Wisconsinites’ right to vote is not infringed upon during this extraordinary and unprecedented time.

The suit seeks the following:

IN FLORIDA: Miami Herald: More Democrats voted in Florida’s 2020 primary than in 2016.

Florida Democratic Party Chair Terrie Rizzo kicked off their Fight for Health Care Tour along the I-4 corridor, a critical part of the state during an election year, with roundtable discussions in Tampa and Lakeland to talk about Trump’s failed policies on health care.

To launch this effort, FDP launched a digital billboard last week in Orlando ahead of President Trump’s fundraiser to contrast the Trump and Democratic health care agendas. The billboards are in English and in Spanish and read “Trump’s America: The Rich Get Richer [and] The Sick Get Sicker.”

OUR DNC WAR ROOM WITH THE TWEET OF THE WEEK: 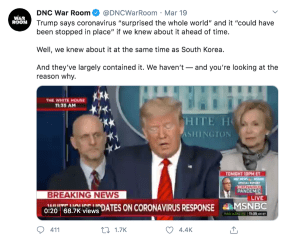