TRUMP’S CHAOTIC, ERRATIC RESPONSE TO COVID-19 IS PUTTING AMERICAN LIVES AT RISK. Across the battlegrounds this week, Democrats joined doctors, nurses, and health care workers to hold Trump accountable for his failure to lead the nation, his chaotic, ineffective response to the coronavirus pandemic and his broken health care promises — all of which have put lives at risk and exacerbated the damage to our economy. Take a look:

Maine Democratic Party Chair Kathleen Marra wrote a piece for the Bangor Daily News laying out the consequences of Trump’s failures for the country’s oldest state:

DEMOCRATS RAMP-UP DIGITAL ORGANIZING. The tactics are changing, but our organizing work stops for nothing. This week NBC joined the DNC for a look inside one of our expanded digital organizing trainings — we’ve had over 6,000 individuals sign up in the past few weeks alone. And multiple Florida outlets covered the launch of the DNC and Florida Democratic Party’s new texting campaign to encourage voting by mail.

MIAMI HERALD: “The Democratic National Committee is launching a text message campaign in Florida asking voters to switch to vote-by-mail ballots, as voter registration organizations continue to shift methods and goals amid the COVID-19 pandemic. In partnership with the Florida Democratic Party, the national party said it was planning to text over a million people in Florida to push for an increase in mail ballot turnout.”

POLITICO: “Juan Penalosa, executive director of the Florida Democratic Party, said in statement that ‘we need to modernize our voting systems to protect voters, and our partnership with the DNC to enroll Floridians in vote-by-mail does just that.’”

TAMPA BAY TIMES: “The state party will tap into the massive database of cell phones the Democratic National Committee purchased in January to help increase voter contact in 2020.”

SUN SENTINEL: “The state Democrats, along with the Democratic National Committee, plan to announce Monday that they’re launching a “massive texting campaign” to urge registered Democrats to sign up to vote by mail. Recipients will get a link to sign up to receive a mail ballot.”

MORE NEWS ON HOW DEMOCRATS ARE ORGANIZING ONLINE ACROSS THE BATTLEGROUNDS:

Los Angeles Times: “The Democratic National Committee has seen a sixfold increase in requests for its digital-organizing training program. In Florida, Democrats are sending texts to more than a million voters to urge them to register to vote by mail… In Wisconsin, a key swing state that holds a primary on Tuesday, Democrats say they have found that the loss of door-knockers’ powerful face-to-face conversations is mitigated by an unprecedented eagerness of voters to chat with volunteers cold-calling or pinging them online.”

Las Vegas Review-Journal: Democrats go digital in organizing with social distancing reality. “The Nevada State Democratic Party laid out a blueprint Monday for how it plans to campaign in an era of social distancing, as its staff and volunteers transition into a digital-only organizing strategy. Staff members are working from home. Volunteers are being corralled for the party’s first all-digital day of action, which will include calling and texting voters. Traditionally in-person training sessions and gatherings are being transitioned to Zoom and Google Hangouts.”

MORE FLORIDA — POLITICO: “IT’S A SH– SANDWICH: REPUBLICANS RAGE AS FLORIDA BECOMES A NIGHTMARE FOR TRUMP.”  POLITICO takes a look at how Trump and Florida Republicans’ erratic, failed response to the coronavirus has injected “an added dose of fear into a jittery GOP” that’s already concerned about Trump’s chances in the state. Worth a read here.

Columbus Dispatch: Candidates try new ways to fundraise, connect during Ohio’s coronavirus shutdown. “Voter registration is also on the minds of state Democrats. It’s too late to register for Ohio’s primary, but presidential elections are a great time to attract new voters — especially those younger than 20 who are eligible for the first time. The problem is that those efforts usually take place in person at fairs, festivals, parades, concerts and on-campus events.”

“‘The best way to get someone registered to vote is for someone they know and trust to ask them,’ Ohio Democratic Party Chairman David Pepper said in a statement. ‘Much of this can be done online, and the progressive tech infrastructure is innovating all the time to make it easier for volunteers to connect with their own networks and encourage them to register to vote.’”

BIG WIN FOR WISCONSINITES! The DNC and Wisconsin Democrats won their case against four Wisconsin laws that would have severely burdened Wisconsin voters’ right to vote in the upcoming April 7, 2020 primary election. 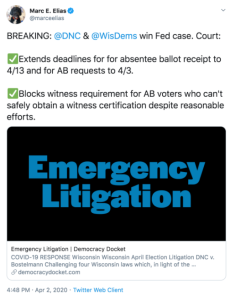 MAYORS TAKE ON TRUMP TO PROTECT THEIR CITIES DURING COVID-19 PANDEMIC. Across the country, mayors are working to protect their cities while Trump and Republicans in many states are pushing through erratic and ineffective plans to combat the pandemic. As Business Insider reports, Phoenix Mayor Kate Gallego is holding Republicans in her state accountable and standing up for Arizonans. Take a look: