WHEN TRUMP AND REPUBLICANS INFRINGE ON VOTERS’ RIGHTS — WE TAKE THEM TO COURT. The Democratic National Committee, Democratic Congressional Campaign Committee, Nevada State Democratic Party, and Priorities USA filed suit in the Eighth Judicial District Court of Clark County seeking to expand voting access for Nevada’s primary on June 9. The suit is also being brought on behalf of several Nevadans whose right to vote is being infringed under the current policies in light of the coronavirus pandemic.

More on the lawsuit here.

BADGER-STATE-BLOWOUT: DESPITE GOP “VOTER SUPPRESSION ON STEROIDS,” DEMOCRATS WIN BIG IN PIVOTAL WISCONSIN RACE.  Continuing a trend we’ve seen all cycle, independent-minded suburban voters and massive Democratic turnout helped Judge Karofsky win a 10-point victory in Wisconsin (even in the face of massive voter suppression efforts from Republicans) — a result that should have the RNC and Trump campaign panicking.

“And it didn’t work, Perez added. More than 1.5 million Wisconsinites turned out to vote, either in person or by mail — more than any of the spring elections of the past three years.

“‘It was voter suppression on steroids,’ said Tom Perez, the chairman of the Democratic National Committee. ‘They tried to steal this election in Wisconsin.’”

Pennsylvania Democrats held a press call with Rep. Susan Wild and Rep. Chrissy Houlahan about the need for the Trump administration to reopen enrollment for the ACA exchanges. Lots more coverage here.

In Florida, Democrats called out Gov. DeSantis for taking a page out of Trump’s playbook and letting Floridians down.

In Nevada, Democratic Party Chair William McCurdy II penned an op-ed calling out Trump for putting Black and Brown Americans at risk during the pandemic.

In Virginia, health care workers called for a step up in leadership as they are suffering without access to personal protection equipment.

DEMOCRATS ARE FIGHTING TO MAKE SURE TRUMP AND REPUBLICANS DON’T TRAMPLE ON OUR CONSTITUTIONAL RIGHT TO VOTE DURING THIS PANDEMIC.

Tom Perez: “We’re 200 days from the most important presidential election of our lifetime, and nobody should be forced to choose between their health and their right to vote. […] This shouldn’t be a right vs. left issue. This is a right vs. wrong issue. It is wrong to force people to put their own safety at risk to exercise their right to vote. It is right to ensure that people have options on how they vote.”

AND IN THE BATTLEGROUNDS…

DEMOCRATS ARE OUT-ORGANIZING REPUBLICANS. The DNC and state parties across the battlegrounds are continuing to ramp up their digital organizing and texting efforts to reach voters where they’re at — online at home. Some highlights: 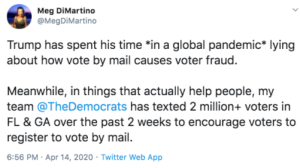