365 DAYS. MULTIPLE PATHWAYS TO 270. ONE TEAM. We are nearly one year out from November 3, 2020, and this morning, DNC Chair Tom Perez, Pennsylvania Attorney General Josh Shapiro, and DNC Communications Director Xochitl Hinojosa held a press call to discuss Trump’s headwinds in battleground states — and how we plan to beat him in 2020. More on that HERE.

U-N-I-T-Y FIND OUT WHAT IT MEANS TO ME. Today, the DNC also announced a new initiative to ensure Democrats enter the general election unified behind our eventual nominee and ready to defeat Trump and Republicans up and down the ballot in 2020. The unity program will help ensure that the eventual nominee has the full support of all elements of the party and facilitate the transition of primary campaigns’ infrastructure into supporting Democrats’ general election efforts. MORE HERE: AP HEADLINE: DEMOCRATS PUSH CANDIDATES TO FULLY COMMIT TO 2020 NOMINEE.

ONE YEAR OUT, ON THE GROUND IN THE BATTLEGROUNDS:

ELECTION DAY IN VA IS FAST APPROACHING… DNC Chair Tom Perez will join Democrats in Virginia this weekend to help Get Out The Vote and join local campaigns to launch canvasses throughout the state ahead of Election Day this Tuesday.

More: “The Democratic Senatorial Campaign Committee, Democratic Congressional Campaign Committee, Democratic National Committee and Priorities USA today challenged laws in three battleground states that provide Republican candidates with an arbitrary and unconstitutional advantage in their placement on general election ballots. The lawsuits target statutes in Arizona, Georgia and Texas that require that ballots list Republicans first, giving them a substantial and unfair advantage in the 2020 elections.”

“A Democratic National Committee spokesman said the national party is working with Iowa Democrats not only to build successful and more accessible caucuses in February but also to build general election infrastructure and relationships with key constituencies with an eye toward the November 2020.

The national party has boosted its monthly funding to help Iowa’s organization by 33 percent over the 2016 cycle, and also is using a fund for state party innovation that was not available during the previous cycle, the spokesman said.

That work will be overseen by two new state-level positions: caucus accessibility directors and organizers, who will work to make the caucuses more accessible; and community engagement directors, who will conduct outreach and mobilization efforts in the labor movement and minority communities.

‘We’re excited to partner with the Iowa Democratic Party to ensure that Democrats across Iowa are engaged with the caucus process and the 2020 campaign,’ national party chairman Tom Perez said in a statement. ‘By working now to maximize participation and mobilize Iowans from every background, these organizers will help ensure a fantastic caucus experience for participants, while building the general election organizing infrastructure our eventual nominee will need to defeat Donald Trump in 2020.’”

WHEREVER TRUMP GOES, DEMOCRATS ARE HOLDING HIM ACCOUNTABLE:

IN ILLINOIS: Chicago Sun-Times: Trump slams Supt. Johnson for skipping his speech to police chiefs “‘Because undermining the Constitution and endangering the world aren’t enough, Trump has abandoned working families in Illinois and across the country and attacked Chicago along the way,’ said Mary Morrissey, executive director of the Democratic Party of Illinois. ‘It’s beyond time to say enough and let the president know if he plans to come to Illinois with hate and divisiveness, we will counter it with positivity and action. And in 2020, we will send him packing.’”

IN TEXAS: FOX7: “In a statement party chairman Gilberto Hinojosa said: ‘When it comes to the Trump administration’s commitment to the military, look no further than Trump’s plan to divert $38.5 million in important military funds for a useless wall that Texans do not want.’”

ASSOCIATED PRESS: Trump’s Rust Belt revival is fading. Will it matter in 2020?

NEW DAY: Wisconsin industrial jobs are in peril as the trade war continues 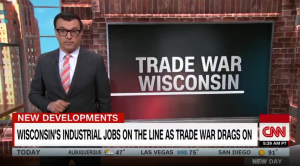 We were deeply saddened about the passing of Kay Hagan and John Conyers — two passionate public servants and fierce advocate for their constituents. They will be missed.

Make sure to follow the DNC’s War Room (@DNCWarRoom) to get real time updates on Trump’s abuses of power and broken promises.