TRUMP’S NO GOOD, VERY BAD WEEK IN PENNSYLVANIA. When Trump traveled to Pennsylvania this week, he was greeted with disastrous coverage — highlighting everything from his failed coronavirus response, to a state GOP infrastructure in shambles. Take a look:

Philadelphia Inquirer: The Trump campaign has ‘walked away’ from the Pennsylvania Republican Party as 2020 heats up, sources say  “The parting of ways includes the Trump campaign and the RNC moving out of the state party’s Harrisburg headquarters and renting their own offices. The two consultants used the phrase ‘walked away’ independently of each other in describing the split, and a third Republican consultant confirmed their assessment.”

Reuters: In Pennsylvania, signs that Trump’s attacks on mail voting could backfire. “… the president’s messaging may be hurting the party’s chances to win in Pennsylvania, a critical battleground state, where Democrats are dominating a surge in requests to vote by mail in the midst of the pandemic.”

Lehigh Valley Live: ‘Dozens of Allentown residents have perished,’ Democrats blast Trump ahead of warehouse visit: “‘The President is out there claiming victory some how some way but despite his promises and his rhetoric and his Tweet, we still do not have enough tests to safely reopen in Allentown, the Lehigh Valley, and Pennsylvania, and a large swath of the United States,’ (Rep. Schweyer) said.”

Philadelphia Inquirer: Trump says in Pa. visit that it’s time to start ‘opening up’ the state: “‘Donald Trump’s visit was nothing more than a photo op to distract from the fact that his administration doesn’t have this virus under control,’ Pennsylvania Democratic Chairwoman Nancy Patton Mills said in a statement.”

Philadelphia Inquirer: Democrats now outnumber Republicans in all suburban Philly counties as GOP loses the edge in Chester County. “‘Anyone who has lived in Chester County since George W. Bush won the White House knows the enormity of this moment,’ Dick Bingham, chairman of the Chester County Democratic Committee, said in a statement Tuesday.”

POLITICO: “Democrats are planning a new line of attack against DeVos over her response to the pandemic. A new memo being circulated today by the Democratic National Committee argues DeVos “used this crisis as an opportunity to push her disastrous agenda that undermines our nation’s public school system.” — DNC Chairman Tom Perez will hold a call today with the mayor of Southfield, Mich., and a Grand Rapids teacher. A DNC spokesperson says the effort will continue in other battleground states and include “press calls, virtual events, guest columns and other digital tactics, utilizing surrogates as well as the voices of teachers, parents, and students and others who have been impacted.”

**POLITICO: ‘They are angry’: Pandemic and economic collapse slam Trump across Rust Belt.**

“The numbers and interviews, however, paint a much grimmer picture. In Wisconsin, Michigan and Pennsylvania—Democrats’ so-called “Blue Wall”—19 counties report coronavirus cases doubling in less than 14 days. Trump won all but one of those counties, by an average of 65 percent. Democrats are working to ensure that doesn’t happen again by casting his stewardship over the virus and economy as a betrayal.”

More on how Dems are holding Trump accountable for his disastrous record and continued broken promises:

WE’RE STILL OUT-ORGANIZING TRUMP AND REPUBLICANS EVERY SINGLE DAY. Across the nation, Democrats are making it their top priority to reach out to voters and let them know about how Trump’s failed policies have brought them harm and put them in a vulnerable position. Some highlights from this week:

In New Hampshire: WMUR: Stacey Abrams tells NH Democrats Granite State can lead fight against voter suppression. “Former Georgia candidate for governor Stacey Abrams told New Hampshire Democrats on Saturday that the Granite State can be the leader in the fight against what she views as a concerted Republican attempt at voter suppression in 2020. […] Party officials said there were more than 3,000 viewers on the Facebook Live and that it was shared by as many as 14,000 people.”

In New Mexico: New Mexico Democrats: Early DPNM Digital Advertising Campaign Results Show Significant Success. “‘We’re thrilled to see such a strong response from Democrats across New Mexico, who understand how important it is to vote from home this year,’ said DPNM Chair Marg Elliston. ‘Absentee voting is the only way to stay safe, while making our voices heard, and we’re doing everything possible to make sure that our communities are healthy and have access to the ballot. We look forward to using this campaign as a template for future success, as we continue to fight to keep New Mexico blue.’”

More on our efforts to ensure no voter has to choose between their health and safety and their constitutional right ever again:

NO MATTER WHERE TRUMP OR HIS CRONIES GOES, WE’RE THERE TO REMIND VOTERS OF THE BROKEN PROMISES:

In Nevada: NV Dems: Trump’s Campaign Can’t Spin His Failed, Chaotic Pandemic Response. “‘The Trump campaign can’t spin their boss’ failed, chaotic response to the pandemic, and they can’t paper over the horrific reality Nevadans are facing every day. Hundreds of Nevadans are dead, and hundreds of thousands are struggling to survive without a paycheck. It didn’t have to be this bad. […] Donald Trump ignored the experts, downplayed the virus, and failed to prepare us for what was coming.”

In Iowa: KCCI: Religious leaders not a part of Pence’s round table speak out about lack of inclusion. “Reverend Frederick Gaddy said there are about 150 people in Des Moines’ St. Paul AME Church, making up a portion of the 600 members in the nine African Methodist Episcopal Churches across Iowa. […] The AME church did not receive an invite to Pence’s discussion, which concerned Gaddy. ‘Especially with the way the COVID-19 pandemic has impacted people of color nationwide,’ Gaddy said.”

ADD THIS TO YOUR WEEKEND WATCH LIST: Tom Perez also hit the airwaves in Michigan to talk about Biden’s strong path to victory in the Great Lakes State: 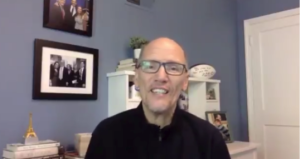