CORRUPT RECOVERY: DEMOCRATS BLAST TRUMP FOR FAILED CORONAVIRUS RESPONSE THAT’S HURTING SMALL BUSINESS. As we face the greatest economic downturn since the Great Depression, tens of thousands of small businesses have already shuttered, and millions have filed for unemployment, Democrats called out Trump for continuing to help his wealthy friends while hardworking Americans continue to bear the brunt of the economic impacts of the pandemic. 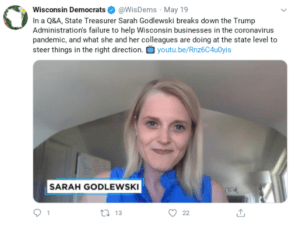 DNC CHAIR TOM PEREZ: “LATINO COMMUNITIES HAVE BEEN TAKING IT ON THE CHIN”. On Thursday, Chair Perez spent the day (virtually) in Florida, hosting events with Latino community members and leaders to discuss the negative impacts Trump’s broken policies have had on Latinos from his attacks on voting rights to his failure to provide support for small businesses as unemployment rates skyrocket. Take a look:

IN THE BATTLEGROUNDS, DEMOCRATS ARE MAKING SURE VOTERS KNOW ABOUT TRUMP’S CHAOTIC RESPONSE TO CORONAVIRUS. Democrats across the battlegrounds are calling out Trump’s trail of broken promises which have put hardworking Americans in a vulnerable position amidst the ongoing pandemic. Some highlights: 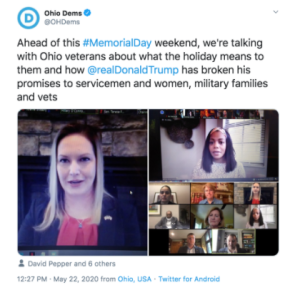 In Maine: Maine Democrats: 87% Of America’s Nurses Are Still Being Forced To Reuse PPE. “‘Our nation’s nurses are on the front lines of this crisis and they deserve our support and our respect,’ said Maine Democratic Party Chair Kathleen Marra. ‘The fact that they are still forced to contend with PPE shortages is reprehensible. Trump has failed our health care workers and it’s long past time for Susan Collins to hold him accountable.’”

In New Hampshire: Concord Monitor: Drop lawsuit aimed at overturning the ACA. “Trump and his administration should be spending their time taking aggressive action to protect all Americans through measures like fully expanding Medicaid, opening a special enrollment for the uninsured, or increasing financial assistance for people struggling to pay for insurance. Instead, they are arguing before the Supreme Court that essential health care coverage should be taken from 20 million Americans, and key programs – like Medicaid expansion – should lose funding.”

In Pennsylvania: Morning Call: Your View by state Rep. Peter Schweyer: Why would we trash health care coverage during a pandemic?: “Recently, voters in two very conservative states, Louisiana and Kentucky, chose as their governors Democrats who promised to embrace Obamacare. And recently in Pennsylvania, we adopted even more aspects of the Affordable Care Act through legislation crafted by none other than the House Republican leader. But still, Donald Trump continues his dangerous legal crusade. No one should be surprised that he opposes the ACA as it was a central tenet of his campaign. But even the most grizzled partisan should be shocked that he’s willing to continue down this path during the middle of this crippling and deadly coronavirus pandemic.”

SPEAKING OF HEALTH CARE…USA TODAY: DEMOCRATS OUTLINE ELECTION PLAN TO MAKE HEALTH CARE THEIR TOP ISSUE AMID CORONAVIRUS. “In a six-page memo shared with USA TODAY, the Democratic National Committee – along with campaign arms for Democratic senators, representatives, governors, attorneys general and state legislatures – outlined a top-to-bottom effort to highlight health care in races across the country in addition to GOP-led efforts to repeal the Affordable Care Act.”

NO MATTER WHERE TRUMP OR HIS CRONIES GOES, WE’RE THERE TO REMIND VOTERS OF THE BROKEN PROMISES:

IN FLORIDA: Florida Democrats: “Mike Pence came to Florida today to put on a show — and, unfortunately, that’s all we got. We are months into this crisis, more than 92,000 Americans have died, and the Trump administration is STILL playing catch up in responding to this virus. Floridians are sick and tired of the Trump administration’s pageantry and will remember their broken promises come November.”

IN MICHIGAN: USA TODAY: “Michigan Democrats slammed Trump’s visit, saying that it shows he is ‘tone deaf’ to economic turmoil states are facing in the coronavirus crisis. ‘He should not be going on a parade to highlight himself at a time when people are dying, when people are getting very sick, when people are continuing to lose their jobs,’ said Michigan state Rep. Yousef Rabhi.”

IN NORTH CAROLINA: Charlotte Observer: Health Secretary to visit Charlotte, meet medical workers on Covid-19 front lines: “Democrats took the occasion to criticize the Trump administration’s handling of the crisis and what officials have called the lack of testing kits. ‘During his visit to Charlotte I hope that instead of just posing for photos, Secretary Azar will recognize these needs and work to secure more tests and equipment for North Carolina’s heroes,’ state Democratic chair Wayne Goodwin said in a statement.”

IN GEORGIA: Georgia Democrats: “Mike Pence and the rest of the Trump administration are guilty of making this crisis worse for millions of Americans by downplaying the coronavirus threat and allowing it to spread unchecked,” said Democratic Party of Georgia Chairwoman Nikema Williams. ‘Now, he’s coming to Georgia, home of the Center for Disease Control, after having ignored public health experts and endangered American lives. Georgians won’t be fooled by Mike Pence, Donald Trump, or this administration’s broken promises.’”

IN MAINE: Maine Democrats: “Instead of asking Mainers for money, Donald Trump’s talking heads need to answer for the chaos of the last two months. Trump chose to downplay the pandemic, failed to contain the virus, and refused to get help to those who need it most. While Trump funnels federal relief to his friends and donors, more than 138,000 Mainers are out of work and small businesses across the state are fighting to stay afloat. Mainers know it didn’t have to be this bad, and we’re going to hold Trump accountable come November.”

IN MARYLAND: DNC: “A photo op can’t spin Trump’s failure to prepare for and respond to the harshest national challenge we’ve faced in a generation. Instead of getting tests and personal protective equipment into the hands of Marylanders, he wasted time, ignored the experts, and promised that the virus would go away on its own. Now, nearly 2,000 Marylanders are dead and more than half a million have lost work. We can’t afford four more years of this chaos.”

THE DEMOCRATS’ ORGANIZING GAME IS STRONGER THAN EVER. Here’s a look at how Democrats across the country are organizing online:

AND *ICYMI*, TRUMP AND DEVOS CONTINUE TO FAIL TEACHERS AND STUDENTS ACROSS THE COUNTRY: