“EXPLODING”: BATTLEGROUND DEMOCRATS SLAM TRUMP AS COVID CASES SKYROCKET. Four months into this pandemic, coronavirus cases are spiking across the country and even breaking records in some states. Across the battlegrounds, Democrats, health experts, and front line workers called out the devastating impacts of Donald Trump’s failed, erratic response.

NV Dems: “Donald Trump is more concerned with his re-election than seriously addressing this pandemic and local Republicans are contorting themselves to act as his rubber stamp. Every day, Nevadans continue to live with the consequences of this Administration’s failure to address this virus and, come November, they will hold Trump and Republicans accountable.”

State Senator Martha Hennessey: “In the Western part of New Hampshire, we are reeling from the impacts of COVID-19 in our communities, and we can trace the severity of this crisis back to Donald Trump and his chaotic, unprepared, and failed response which has actively made the coronavirus outbreak worse for our seniors in long-term care.”

PA Dems Chair Nancy Patton Mills on CBS 21: “Donald Trump still has not delivered on a national testing strategy, he regularly mocks the use of masks and continues to push states around the country to re-open before it’s safe to do so.” 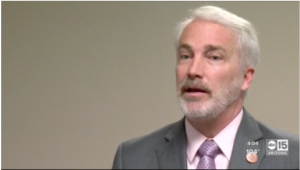 READ THE ROOM — TRUMP CHEERS 17.8 MILLION AMERICANS OUT OF WORK. While Trump celebrated a devastating economic outlook for working families, Democrats across the country called out his failure to protect Americans’ livelihoods.

HOLDING THEM ACCOUNTABLE. Wherever Trump and his cronies go, Democrats will be there to hold them accountable. See for yourself!

Arizona State Representative and Doctor Randy Friese on ABC 15: “Trump has wasted months ignoring the warning signs from experts, Trump has ignored the science, and downplayed this pandemic. When it mattered most, Trump has failed to take action. Arizona is at the epicenter of one of the worst public health crises in history.”

Dallas Morning News: Mike Pence in Dallas as Gov. Abbott says COVID-19 has taken ‘very dangerous turn in Texas.’ “‘The COVID-19 situation is out of control,’ said Texas Democratic Party Chairman Gilberto Hinojosa. ‘Pence doesn’t get it. The best way to get out of a hole is not to keep digging deeper. We need drastic measures and for the administration to show some leadership.’”

MI Dems: “Donald Trump has failed small businesses in Michigan with his disastrous COVID-19 response and a Paycheck Protection Program that put big corporations first while leaving small businesses behind. After months of erratic economic leadership, he’s now sending Jovita Carranza to Michigan to clean up his mess just as fears of yet another wave of COVID threaten our state.”

LA Dems: “Betsy DeVos can’t spin her boss’ three and a half years of broken promises. Instead of getting emergency resources to schools that need it, Trump and DeVos are using this crisis to push a failed, anti-education agenda.”

GUEST COLUMN IN THE NH BUSINESS REVIEW: “TRUMP GOT PLAYED BY CHINA; GRANITE STATERS PAY THE PRICE.” “It’s no wonder that, while groveling for help in his re-election, Trump told China’s President Xi Jinping that Democrats would be tougher on China. After three and a half years of Trump’s failed theatrics, we can do better. Granite Staters deserve a president who will truly make America great again by standing up and fighting for us on the world stage. This November, we’re going to get one in Joe Biden.”

THE STORY THAT ISN’T GOING ANYWHERE. This week, we learned that Donald Trump received intelligence reports that Russia paid bounties to Taliban-linked militants to kill coalition forces in Afghanistan, including U.S. servicemembers — and he still refuses to take any action to punish Russia and protect troops on the ground. Democratic leaders and veterans across the country called out this dereliction of duty: