“THIS IS NOT A TEST” — NEW BATTLEGROUND AD SLAMS TRUMP’S SCHOOL REOPENING FAILURES. The DNC released a new ad this week calling out Donald Trump for gambling with children’s health and safety. Targeted to teachers and parents with school age children, the ad is airing in the Milwaukee and Detroit media markets, and a Spanish-language version is airing in Phoenix and Miami. 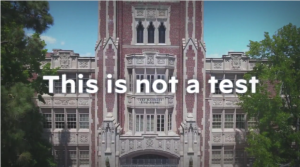 HOW IT’S PLAYING: While Trump gets hammered on the airwaves, he isn’t faring any better on the ground.

“WE’VE LOST A WHOLE LOT” — TRUMP SLAMMED ON FAILURES TO COMMUNITIES OF COLOR. On Tuesday, while Joe Biden unveiled his plan to advance racial equity as part of the United States’ economic recovery, Democrats across the battleground states slammed Trump’s disastrous record with communities of color.

Democratic Party of Georgia Chair and State Senator Nikema Williams: “At every level, Donald Trump’s failed leadership has made life harder for Black Americans and people of color. While Trump used his economic policies to enrich big banks and corporate cronies, Black and brown Georgians were left out, and our racial wealth gap has grown.”

Nevada Assemblyman Edgar Flores: “From day one, Donald Trump’s rhetoric has demonized the Latino community, while his anti-immigrant agenda has terrorized our families. Now, as a direct result of his failed pandemic response, Latinos are bearing the brunt of the coronavirus crisis as our communities, businesses, and priorities get left behind.”

North Carolina Senate Democratic Leader Dan Blue: “Four years ago, Donald Trump asked African American North Carolinians what we have to lose by voting for him. We knew the answer then and we know it now — we have everything to lose by supporting Donald Trump. Trump has spent his presidency supporting big businesses and wealthy investors over communities of color; undercutting affordable housing opportunities and undermining efforts to reduce racial disparities in education.”

State Senator Sharif Street: “Four years ago, Donald Trump tried to sell himself to Black Americans by asking us ‘What the hell do you have to lose?’ It turns out we’ve lost a whole lot under the Donald Trump presidency … We’ve watched Donald Trump go after our health care, undermine civil rights protections, and in recent months, fail to address the COVID-19 pandemic which is disproportionately killing Black and Brown Americans.”

Check out much more HERE!

State Senator and National Organization for Women (NOW) Board Member Victoria Steele: “For the past four years, Donald Trump’s utter contempt for women’s fundamental rights has been on full display … Trump promised time and again that he would ‘do more for women than anybody else,’ but over the course of his presidency, Trump has done nothing but wage relentless attacks on women’s rights.”

Florida Democratic Party Chair Terrie Rizzo: “Not only has Donald Trump failed to deliver on this promise to ‘do more for women,’ he’s actively worked to make it easier to discriminate against women.”

Maine Democratic Party Chair Kathleen Marra: “Donald Trump’s presidency has been a disaster for women … His administration’s cruel and ineffective policies have endangered our health, threatened our physical safety, and reduced our opportunities in the workforce.”

Minnesota Lieutenant Governor Peggy Flanagan: “Donald Trump made a career demonstrating and celebrating behavior that perpetuates violence against Native women and girls … We need a President who will fight for the health and safety of women and Native people across the country. Joe Biden spent his career doing just that and will set a good example for our children as they learn to treat their neighbors with dignity and respect.”

Plus a lot more HERE!

Colorado Democrats: “Colorado families can’t afford more years of leaders hellbent on ripping away coverage and spiking costs — they want leaders who will work to protect our healthcare and lower costs for everyone across our state. That’s why Colorado will reject Trump and his Republican enablers’ horrific health care agenda come November.”

Iowa Democrats: “Even during a global pandemic, the GOP’s only plan for health care is to rip it away from as many Iowans as possible … While Democrats are running to expand access to affordable, high-quality health care, GOP leaders like Trump and Ernst have been relentless in their attempt to deny health coverage to Iowans.”

New Hampshire Democrats: “Today marks three years since this fight should have been settled once and for all in favor of the Affordable Care Act, but Republicans continue to attack. Americans everywhere made it clear — you cannot take away our care, we will fight back every time.”

Virginia Democrats: “On the campaign trail, Donald Trump promised Virginians that we would ‘pay much less’ for a ‘great health care program.’ But from his first days in office, he has instead waged a ruthless campaign to overturn the Affordable Care Act, threatening coverage for hundreds of thousands of Viginians and protections for millions more with preexisting conditions.”

You guessed it — read more HERE!

FROM THE GRANITE STATE TO THE SUNSHINE STATE. Wherever Trump and his cronies go, Democrats will be there to hold them accountable. See for yourself:

KOSA: Democratic National Committee launches advertising campaign on Odessa American’s website ahead of President Trump’s visit. “Ahead of President Trump’s trip to Odessa and Midland today, the Democratic National Committee launched a daylong digital advertising campaign on the Odessa American’s homepage. The bright orange ads scattered up and down the newspaper’s website call out the President’s response to the coronavirus pandemic, calling it catastrophic.”

WMUR: Ahead of ‘tele-rally,’ Democratic leaders say Trump has broken promises to women. “Three New Hampshire Democratic women who formerly held top elected positions on Thursday accused President Donald Trump of breaking promises to women that he made on the campaign trail, including in New Hampshire, in 2015 and 2016 … ‘When Donald Trump appears on his tele-rally tonight, it will be a glaring reminder that his presidency is defined by a record of broken promises to Granite State women,’ [Former Rep. Carol] Shea-Porter said.”

CBS 21: PA Democrats criticize Trump administration’s handling of pandemic ahead of Pence’s visit. “Pennsylvania Democrats are using the visit as a chance to critique the Trump administration’s pandemic response, which they say has been mishandled from the start. ‘Trump has put big corporations and his millionaire and billionaire friends first, giving large bailouts to the corporations he’s tied to, rather than the small businesses that are struggling to survive,’ Nancy Patton Mills, chairperson for the PA Democrats, said.”

Refinery29: Why Is Ivanka Trump Taking Credit For Preventing Violence Against Indigenous Women? “Democratic lawmakers and Indigenous women expressed concerns and skepticism that the Trump Administration is doing much to help, especially after failing to quickly provide COVID-19 relief to tribal nations in early 2020.”

BATTLEGROUND DEMS FLEX THEIR MUSCLE 95 DAYS OUT. Politico: State Democrats mount big comeback in 2020. “Across 15 possible battleground states, nearly every Democratic state party group is hitting higher quarterly fundraising totals or holding more cash on hand in their federal accounts than they did at this point during the 2016 presidential campaign, and a majority of them did both … Many of these state parties — responsible for field operations and coordinating a ticket-wide campaign — are seeing three, four or five times the amount of cash they did before.”

GOOD LUCK WITH THAT! While Trump continues to light his own votes on fire with vote-by-mail conspiracy theories, Democrats are flocking to mail-in ballots with less than 100 days to Election Day.

ABC News: Months away from Election Day, Democrats show signs of outpacing Republicans in mail voting. “In the key battleground of Florida and Ohio, Democrats outpaced Republicans in absentee ballot requests during primary contests. North Carolina, another state that is crucial for the presidential electoral count, is slated to be among the first to mail general election ballots this fall. There, Democrats’ requests for absentee ballots currently top Republicans by nearly five times.”

NBC News: In N.C., economic fallout for business and political repercussions for Trump. “The political bickering over the convention has left North Carolina GOP leaders worried about November, with Biden hoping to reclaim a state Democrats last won when he was on the ticket in 2008 but lost in 2012. ‘If Joe Biden wins North Carolina, Trump gets his ass kicked all across the country,’ one state Republican official told NBC News.”