WE’LL SEE YOU IN THE PEACH STATE NEXT WEEK! This Tuesday, November 20, ten candidates will take the stage for the fifth Democratic primary debate in Atlanta at Tyler Perry Studios. Oh and did we mention, the debate will feature an all female moderator line-up? Here’s what you need to know before then: 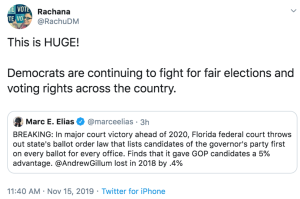 THE PATH TO TAKING BACK THE WHITE HOUSE ON PENNSYLVANIA AVE RUNS THROUGH THE (BLUE) PENNSYLVANIA SUBURBS. Following last week’s historic Democratic wins across southeastern Pennsylvania, Democratic National Committee CEO Seema Nanda and PA Democratic Party Vice Chair Sharif Street convened a roundtable discussion with local party leadership from Bucks, Chester, Delaware, and Montgomery counties to discuss the groundbreaking wins across the suburbs of southeastern Pennsylvania and plans to capitalize on that momentum to beat Trump and Republicans up and down the ticket in 2020.

This is not a trend that is limited to Pennsylvania — suburban voters across the country are rejecting Trump and the GOP. Take a look:

TRUMP’S PATH TO 270 IS NARROWING BY THE DAY. HuffPost: Trump Won Iowa Easily In 2016, But His Trade War Is Putting It In Play For 2020. “Troy Price, chairman of the Iowa Democratic Party, said Trump won the state in 2016 by promising to increase markets and profits for Iowa farms. ‘We have seen nothing but the opposite since he’s been in office,’ Price said. ‘We’ve lost the markets that Iowans took decades to develop.’ He said the loss of farm income has led to problems for others that rely on the farmers’ success, such as the 160 workers who were laid off at a John Deere factory in eastern Iowa. ‘This is having ripple effects across the state,’ Price said. ‘I think the president has a big problem and Republicans have a big problem. … Donald Trump presented himself as the change candidate. Unfortunately, the changes that he brought have not been good for Iowa.’”

ICYMI: DEMOCRATS PUTTING AZ IN PLAY. “DNC officials said in a briefing Thursday that the shifting demographics in Arizona, its growing Latino population and declining approval ratings of President Donald Trump put the state in play. The move is part of what the DNC is calling an ‘unprecedented’ national investment, that began more than a year before the general election, to ensure that the party’s eventual nominee ‘has a pool of trained, ready-to-hire field talent.’”

WHEREVER TRUMP OR HIS CRONIES GO, DEMOCRATS ARE HOLDING ARE THEM ACCOUNTABLE FOR HIS BROKEN PROMISES.

NYT: (Opinion): Some of Trump’s Most Devious Lies Are About Health Care

AS THE SUPREME COURT TOOK UP ORAL ARGUMENTS ON DACA CASE, STATES CALLED OUT TRUMP, REPUBLICANS FOR THEIR BROKEN PROMISES TO DREAMERS.

#EMBARRASSING. New Hampshire Democrats Using Chaffetz’s Never Trump Past to Divide GOP, Create Dissent in Ranks. “The fact that Democrats are exploiting the Never Trump history of certain Republicans—Chaffetz was, like many Republicans in the lead-up to the 2016 election, hesitant to endorse the president—is a new and sophisticated strategy of leveraging the establishment GOP and Never Trump movement to divide Republicans and create dissent in the ranks ahead of 2020.”

Make sure to follow the DNC’s War Room (@DNCWarRoom) to get real time updates on Trump’s abuses of power and broken promises.