HAPPY NEW YEAR! THERE ARE JUST 290 DAYS UNTIL ELECTION DAY.

While in Wisconsin, Perez also kicked off our second wave of Organizing Corps 2020 trainings in Madison — the program will help ensure our eventual nominee has a pool of trained and ready-to-hire organizers across the battlegrounds.

Some highlights from the Badger State:

DONALD TRUMP’S BROKEN PROMISES ARE NOT WELCOME IN FLORIDA. When he showed up in Florida this week, Mike Pence was greeted by a week of backlash from local leaders and voters from Tampa to Kissimmee. At events across the state, they spoke about how the Trump administration is  gutting health care, failing to provide proper funding for Puerto Rico’s recovery, and supporting near-shore drilling. These clips say it all:

“With Trump nearing the end of his third year as president, it’s time for an update — and a reality check. Contrary to what he tells his fans, Trump has broken more key promises than he has kept. With our latest update, Trump has broken about 43 percent of 60 key promises — and kept about 35 percent. He settled for a compromise on 12 percent.”

“Fully repeal and replace Obamacare. Trump’s promise to repeal and replace the Affordable Care Act backfired spectacularly in his first year in office, and the backlash over repeal votes taken by Republicans helped Democrats retake control of the House in the midterm elections.”

“Reduce the number of tax brackets from seven to three and, likewise, greatly simplify tax forms. […] Trump regularly touts the tax-cut bill, but it also failed to meet several other specific pledges, such as insuring the largest tax reductions were for the middle class and allowing Americans to deduct child care and elder care from their taxes.”

WHEREVER TRUMP AND HIS CRONIES GO, WE’LL BE THERE TO HOLD HIM ACCOUNTABLE

MUST READ BY REP. GWEN MOORE: DONALD TRUMP HAS A LOT TO ANSWER FOR IN MILWAUKEE. Trump faced a lot of backlash from Wisconsinites ahead of his rally this week, but none quite as scathing as Rep. Gwen Moore’s. Read all about it in the Madison State-Journal. Toplines:

OLD MCDONALD….DIDN’T HAVE A FARM THANKS TO TRUMP’S TRADE POLICIES. Trump continues to try and gloss over the fact that his failed trade policies have brought nothing but harm to farmers in Wisconsin. Take a look:

The American Independent: Wisconsin dairy farmers suffer massive blow thanks to Trump’s trade war. “The state of Wisconsin, famous for its cheese, lost 10% of its dairy farms in 2019, Dairy Herd Management reported on Thursday. The loss of 818 dairies was the largest decline in Wisconsin history. Trouble for dairy farmers started in 2018, when Donald Trump engaged in a protracted trade war with China. In retaliation for increased tariffs from the United States, China placed tariffs on a number of U.S. agricultural exports. As a result, exports of U.S. dairy to China dropped by more than 50% in 2019, according to CNBC.”

Market’s Insider: Wisconsin lost 10% of its dairy farmers in 2019, marking its biggest decline ever as Trump’s trade wars raged. “Farmers have suffered significant business losses because of the trade war, resulting in a $28 billion bailout package that’s double the amount the government forked over to Detroit automakers at the height of the recession a decade ago. Americans have also borne the brunt of Trump’s tariffs. A paper released this week from the National Bureau of Economic Research found that consumers paid for “approximately 100 percent” of the tariffs in the form of increased prices.” 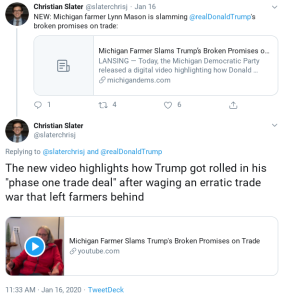 Washington Post: Trade was supposed to be Trump’s signature issue. His efforts have fallen flat.

The New Yorker: The Uneasy Truce of Trump’s Trade Deal with China 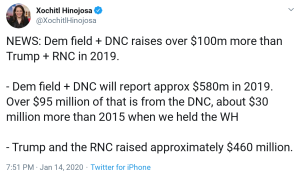