The DNC is announcing the launch of targeted robocalls and digital ads in Tennessee urging Tennesseans to call on Senator Corker and demand that he votes no on the GOP tax plan. The GOP sham tax plan would cut education funding, make it more expensive to buy a home, increase the deficit, and gut Medicare funding for seniors – all so they can fund another giant tax giveaway to wealthy corporations and the top 1%.

“This isn’t a plan, it’s a scam, and it would be disastrous for hardworking Tennessee families,” said DNC Chair Tom Perez. “Republicans are willing to increase taxes on Tennessee middle-class families – all in order to provide massive giveaways to billionaires and corporations. The people of Tennessee can stop this scam of a bill by calling Senator Corker and demanding that he take a stand for Tennessee and vote no on this massive giveaway for people like Donald Trump and his wealthy friends on Wall Street. This sham of a bill would leave a massive hole in the federal deficit and require drastic cuts to Social Security, Medicare, Medicaid, education, and other programs Tennesseans rely on. Democrats believe that we should reform our tax system to work better for the middle class, and we will fight tooth-and-nail to make sure this bill never makes it to Trump’s desk.”

Below is the text of the Tennessee robocall and an image of the digital ad:

Call Senator Corker RIGHT NOW at (202) 224-3121 and tell them you oppose this giant giveaway to wealthy corporations and the top 1%. 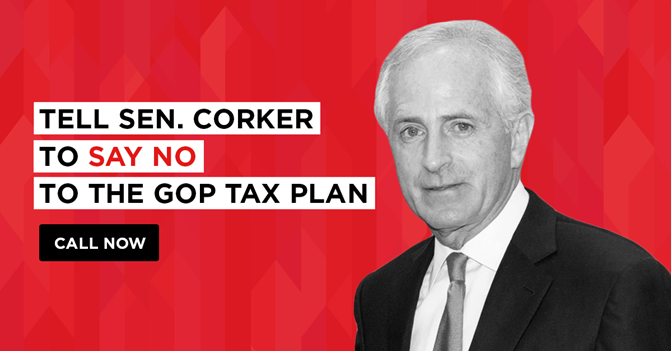