HAPPY NEW YEAR! THERE ARE JUST 298 DAYS UNTIL ELECTION DAY.

AXIOS: DNC CHAIR TO HIT TRUMP ON HEALTH CARE IN BATTLEGROUND STATES TOUR. The DNC kicked off 2020 by launching a tour of the battleground states to discuss Trump’s broken promises on health care. DNC Chair Tom Perez’s first event was in Miami yesterday and we’ll be in Pennsylvania and Wisconsin later this month.

MIAMI HERALD: DNC CHAIR KICKS OFF ‘BATTLEGROUND TOUR’ WITH LATINO-FOCUSED HEALTH CARE TALK. Chair Perez drew the stark contrast between Democrats and Trump on health care at a roundtable in Miami on the first stop of his health care tour. Trump’s health care agenda jeopardizes coverage protections for millions of Floridians with preexisting conditions and coverage gains made by the Latino community under the ACA, while Democrats are working to lower costs and expand access to care. Some highlights from the roundtable from the Miami Herald:

NEXT STOP: PHILLY. Chair Perez is heading to Philadelphia later this month to discuss Trump’s failed record on health care with voters across the commonwealth. More from the Pennsylvania Capital-Star:

Michigan Democrats joined in too, and this headline says it all — MLive: Donald Trump tells Toledo crowd Ohio had its ‘best year economically,’ even as the state lost jobs

NEVADA DEMS CALL OUT TRUMP FOR HURTING WORKING FAMILIES: As Ivanka Trump, Elaine Chao, and Marc Lotter descended upon Nevada, Democrats called out Trump and his administration for breaking their promises to Nevadans:

DNCMKE! NO MATTER WHO OUR NOMINEE IS, DEMOCRATS ARE READY. The DNC held a walk through of the convention center in Milwaukee ahead of the July convention and shared our strategy to win in Wisconsin and across the battlegrounds.

From the AP: “‘Having the convention in Milwaukee is more than just a ‘great party,’ it’s also an organizing opportunity to reach thousands of volunteers, said David Bergstein, battleground state communications director for the DNC. ‘We can’t take anything for granted,’ Bergstein said. ‘We have to reach out to every possible voter that we can.’”

“TRUMP’S ECONOMY HASN’T LIFTED ALL BOATS” Trump made lots of promises to Pennsylvanians on the campaign trail to boost the economy and make their lives better, but he has failed to deliver. Those broken promises are causing Trump to face headwinds in PA. More in this column in the Pennsylvania Capital-Star:

AMERICAN BUSINESSES AND CONSUMERS ARE STILL PAYING FOR TRUMP’S ERRATIC TRADE POLICIES. Trump promised Americans a booming economy, but his trade deal with China has caused American workers to bear the brunt of his failed policies. From the NYT:

NEVADA IS MAKING 2020 CAUCUSES MORE ACCESSIBLE THAN EVER BEFORE. The Nevada Democratic Party announced even more caucus sites on the Las Vegas Strip, making it easier than ever before for casino and hospitality workers to participate in the 2020 caucuses this February. These locations will be open 24 hours a day to ensure that every single eligible voter is able to participate in the process.

**TRUMP’S TRADE POLICIES HAVE PUT FARMERS AT RISK. THE HEADLINES SAY IT ALL**

DEMOCRATS ARE MAKING ARIZONA A KEY BATTLEGROUND IN 2020.

Democrats are going full-force in Arizona to win in 2020 — while Republicans are “having to work harder.” Read all about it in the AZ Central: 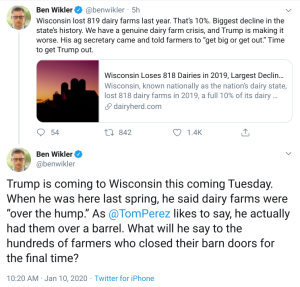