Ahead of the second day of the Republican National Convention, Democrats across the battleground states slammed Donald Trump’s economic failures and highlighted the devastating consequences his chaos presidency is inflicting on working families. See for yourself:

Arizona Republic: “Kristin Urquiza, who blamed Republican Gov. Doug Ducey for her father’s death from COVID-19 complications and spoke of her loss in a riveting convention speech last week, said Trump did not listen to experts or take the virus seriously early on. On Tuesday, Urquiza, who grew up in Maryvale and now lives in San Francisco, continued to hold the GOP responsible. ‘The thing that really gets me is that we still don’t have a plan to contain this virus,’ she said. ‘All he’s done is create chaos for us and he’s still claiming that the virus will just disappear.’”

State Senator Julie Gonzales on KMGH: “Democratic State Senator Julie Gonzales … told us voters are desperate for healing, unity, and solutions — and she says she has seen none of that at this Convention. ‘There literally is no Republican platform. They say we have no policy agenda, we have no ideas, we’re just going to do whatever Donald Trump says, and I think it shows.’” 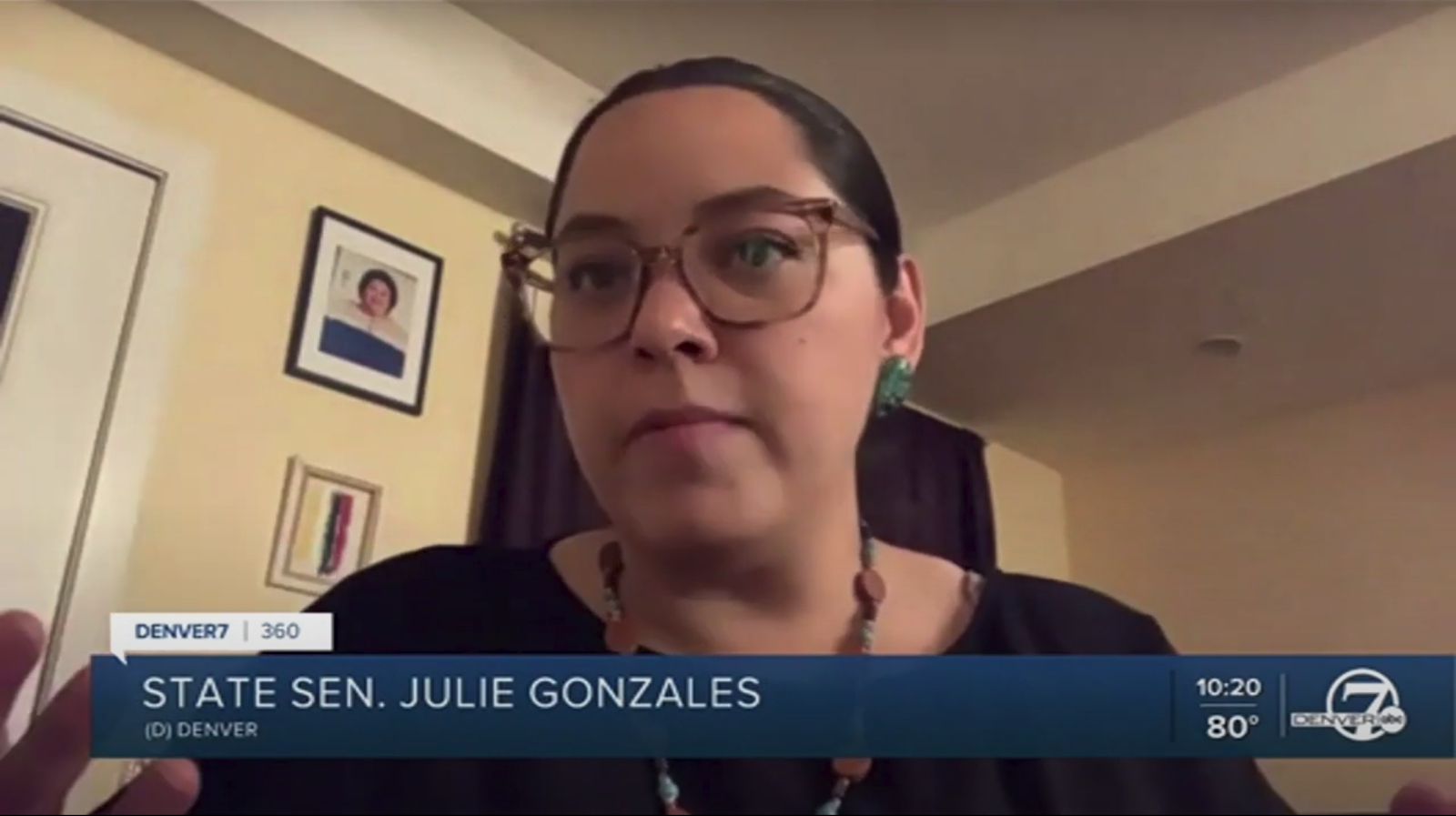 WMFE: Florida Democrats Call on Bipartisan Support of the HEROES Act Ahead of the Second Night of the Republican National Convention. “‘We’re looking at unemployment numbers in Orange and Polk County in the mid-teens and a staggering 20 percent in Osceola County. This is critical. A lot of these jobs are tied to tourism which is particularly hard hit by the pandemic. So this unemployment is going to be the difference between people being able to make their ends meet and facing utter disaster.’”

Florida Politics: “‘Donald Trump certainly hasn’t changed since Nuñez tweeted her criticism — he continues to sow division, lie to the American people, and traffic in hate,’ said Florida Democratic Party spokeswoman Frances Swanson. ‘While it’s clear Republican leadership has settled for chaos and incompetence, the American people don’t have to.’”

11Alive: Education Secretary Betsy DeVos visits Forsyth County school Tuesday. “But across the metro — in another district that decided to welcome students back to in-person learning — former Paulding County school nurse and mother Amy Westmoreland rebuked the secretary’s stance. ‘I really don’t think she has a right to even be here considering that she was part of the problem. She was with the agreement of opening schools,’ Westmoreland said.”

Associated Press: Lobster fisher’s pro-Trump speech sets off political spat. “Maine Democrats said before Joyce’s speech on Tuesday that Trump has done more to hurt the lobster fishery than aid it. Trump’s trade hostilities with China have taken a valuable market away from the U.S. lobster industry, Maine Democratic Party Chair Kathleen Marra said. ‘Trump’s failed trade war with China upended Maine’s vital lobster industry and turned hardworking lobstermen and women into collateral damage,’ Marra said. ‘He promised us better trade deals, but instead he instead got played by China, and Maine workers got the bill.’”

DNC Spokesperson David Bergstein on WJBK: “What folks are not gonna hear at the RNC is the voices of ordinary Americans who are really hurting because Donald Trump hasn’t been able to follow through on his word.” Joe Baratta: St. Cloud Times: Trump’s ‘Land of Opportunity’ doesn’t reach St. Cloud. “When Trump and Emmer talk about the United States being the ‘Land of Opportunity’ tonight, what they really mean is Land of Opportunity for the rich and well-connected. Take the Carrier plant in Indiana. Trump boasted about saving jobs in the Hoosier State, where Vice President Mike Pence was once governor. Despite his efforts, the plant is still laying off workers and morale has bottomed out. Meanwhile, Trump’s tax cuts helped large corporations with stock buybacks while offering little for workers.”

KTOE: “Democrats respond Trump didn’t acknowledge the seriousness of COVID until it took hold, then left states to fend for themselves. ‘There’s no amount of production that’s gonna be able to paper over his failures and his broken promises that he made to Minnesotans’ … [said] Minnesota D-F-L Party Chairman Ken Martin.” 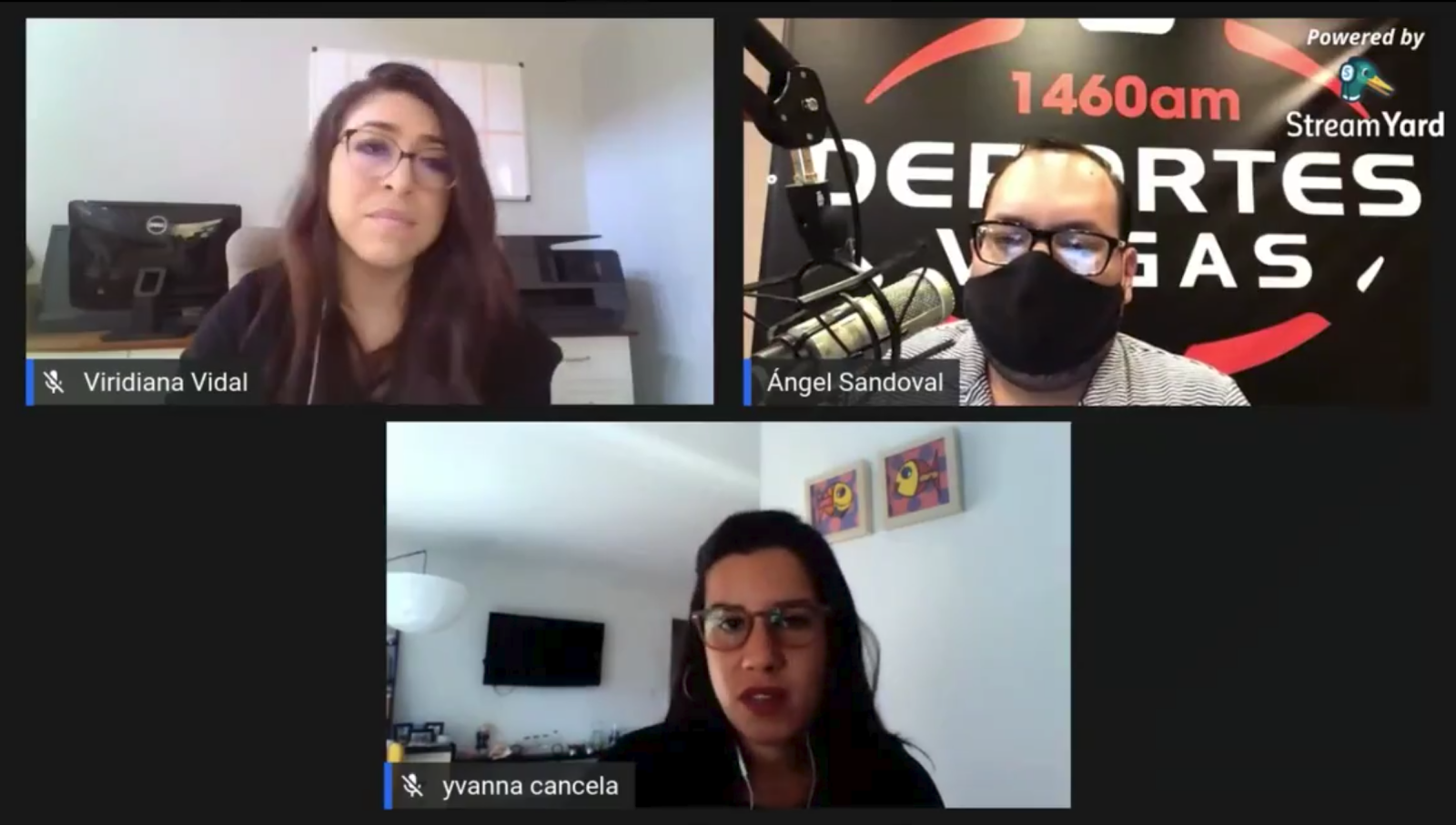 Mayor Marty Walsh on WGIR: “Quite honestly, what the country needs right now is a uniter … We are a very divided country at this point, and Donald Trump has spent the last three and a half years dividing us. Whether you agree with him or not, when you talk to any American, no one really understands where the future of our country is going. And I think that having Biden and Kamala Harris — they’re steady, they’re unifying, they’re experienced. I think that’s really important. I think it’s important also that they care about the average person. They’re not focused on dividing to win. They’re focused on uniting to win.”

Former Governor John Lynch on WKBK: “I think a significant number of Republicans are going to be very distraught and very concerned if Trump is re-elected. Now the antidote, as you referred to it Dan, I think the President of the United States has to early on, from day one, reach out to the other party and involve them in discussions, identify what the problem is, and make them a part of the solution. You can’t wait until you need them to invite them to the White House … And that’s what I think we’re going to see Joe Biden do– reach out to the other side from day one.”

Manchester Ink Link: “‘The only double standard is the one where Trump and Sununu’s donors get to do whatever they want while Granite Staters are forced to play by the rules,’ said New Hampshire Democratic Party Spokesperson Michael Beyer.”

Charlotte Observer: “Caroline Husa, who runs an events business with her husband in the Triangle, said they expected business to grow 300% this year. Instead, she said, ‘We simply haven’t been able to function.’ She said they were unable to qualify for a loan under the CARES Act. She blamed the president for missteps in his response. ‘It was crucial that he recognize the threat early,’ she said. ‘He waved the virus off. He said the virus would disappear on its own.’” 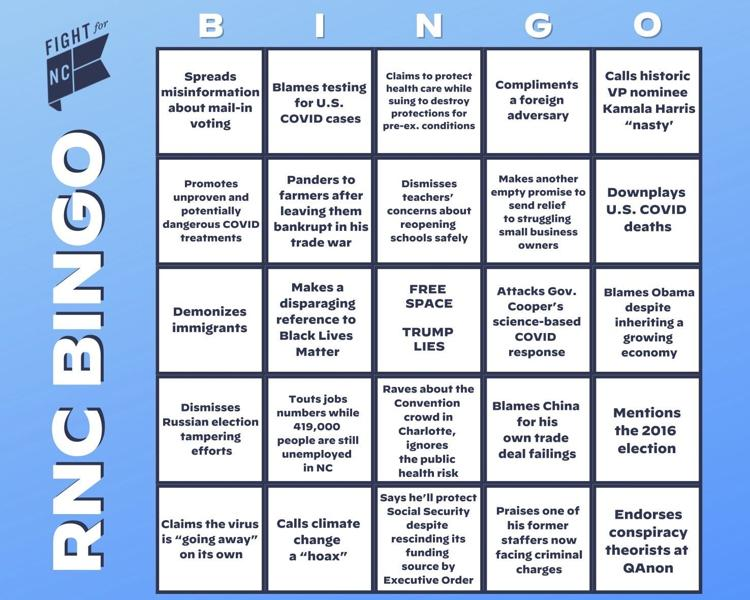 Charlotte Post: Mayor Vi Lyles: Housing disparities boosted by COVID-19 Systemic inequities plague nation. “Instead of protecting North Carolina’s working families, since the beginning of the pandemic, Donald Trump has rolled back the protections implemented by the Obama-Biden administration in the Affirmatively Furthering Fair Housing regulation. In an attempt to appeal to his base, Trump has dangerously and falsely claimed that affordable housing would increase crime in neighborhoods.”

DNC Chair Tom Perez on WXII: “They don’t have a platform. They don’t stand for anything other than Donald Trump’s ego aggrandizement. On the other hand, Democrats have a plan to deal with the pandemic, a plan to bring back the economy, and bring it back better.” 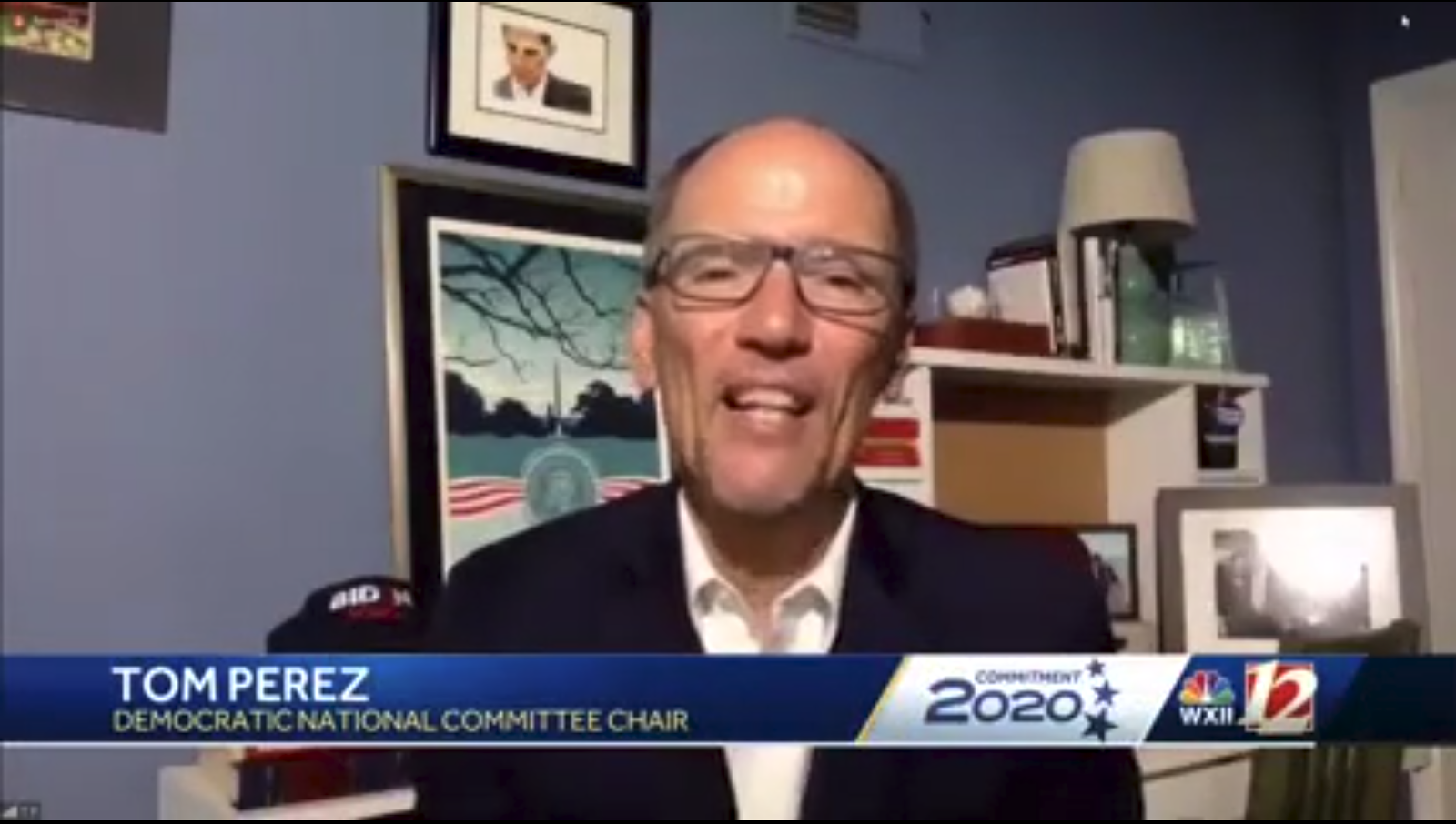 Toledo Blade: “‘Goodyear employs 3,300 people in Akron,’ [Sen. Sherrod Brown] said. ‘In just one tweet, President Trump put their livelihoods at risk. That’s who this president is. It’s who we will see on display this week.’”

U.S. Sen. Sherrod Brown on WBNS: “This afternoon, I talked with Senator Sherrod Brown, who says President Trump’s remarks will have a negative impact on Goodyear’s sales, stock price, and possibly jobs. The senator also says what he heard during the first night of the RNC doesn’t bode well for Ohio families. ‘No discussion of the 680,000 unemployed workers in Ohio — the tens of millions around the country — about helping them with unemployment, about helping schools that are trying to open safely.’” 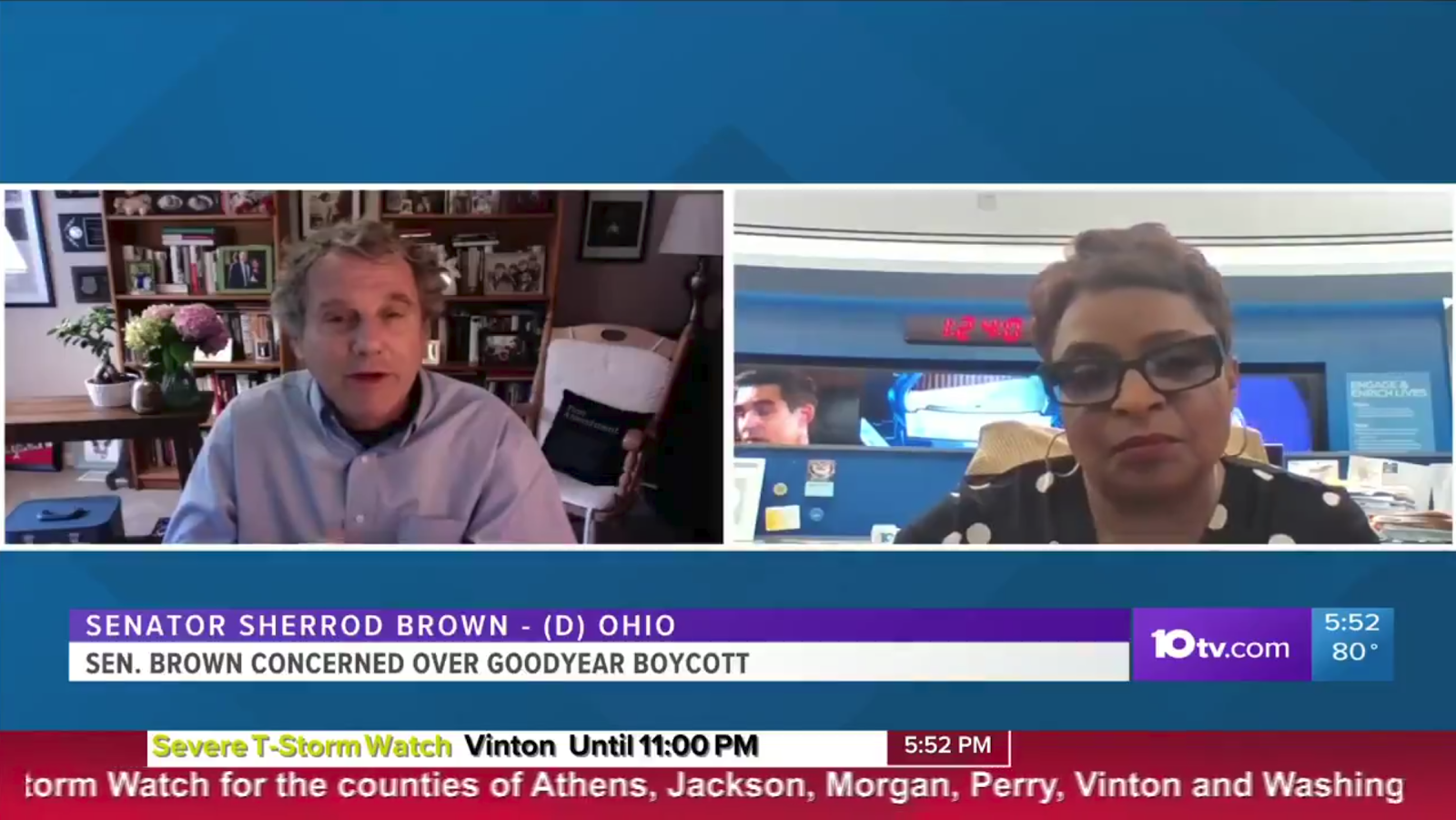 Ohio Democratic Party Chair David Pepper on WSPD: “2019 was the worst economic year Ohio had since 2009. We lost manufacturing jobs, we lost construction jobs. Bankruptcies with farms were up … Even before the COVID crisis hit, Donald Trump’s broken promises and his failed policies had already set Ohio back.”

U.S. Rep. Tim Ryan on WSPD: “What Trump did crushed the farmers. That’s why you see a lot of Republican farmers moving to Joe Biden … Joe Biden is talking about creating an economy with really good paying jobs that are going to move the industries of the future, and I think Trump is chasing smokestacks … You’re talking about thousands and tens of thousands of jobs if we get our act together and lead the world in this, and that’s what Joe Biden wants us to do.”

Cleveland Plain Dealer: “Democrats have criticized Trump for both Lordstown and Goodyear over the past week, saying he has broken his promises to protect Ohio jobs. ‘Donald Trump promised to bring jobs back to our communities, failed to get it done, then blamed Ohioans for his own incompetence,’ said David Pepper, Ohio Democratic Party chairman. ‘He’s never cared about working families, and a half-baked photo op can’t spin that betrayal.’”

Youngstown Business Journal: “U.S. Sen. Sherrod Brown, D-Ohio, blasted Trump on Twitter for his failure to intervene when GM decided to close the GM plant. ‘Trump never cared about the Lordstown workers. Instead, he broke his promises and betrayed them,’ he said. ‘President Trump promised Ohioans, ‘If I’m elected, you won’t lose one plant.’  Then, GM closed the Lordstown plant and laid off thousands of workers — and Trump didn’t lift a FINGER to protect them.’ In March, Brown added, Trump was unaware that GM had sold the Lordstown plant, ‘after claiming he’d bring their jobs back.’”

KTVT: “Texas Democratic Party Chair Gilberto Hinojosa released a statement about day one of the RNC, calling it a night of fear and fealty to president Donald Trump. He says: ‘Republicans failed to answer for Trump’s failures managing the coronavirus crisis, costing 100,000 Americans their lives, and infecting over 6 million more and leaving over 38 million unemployed.’” 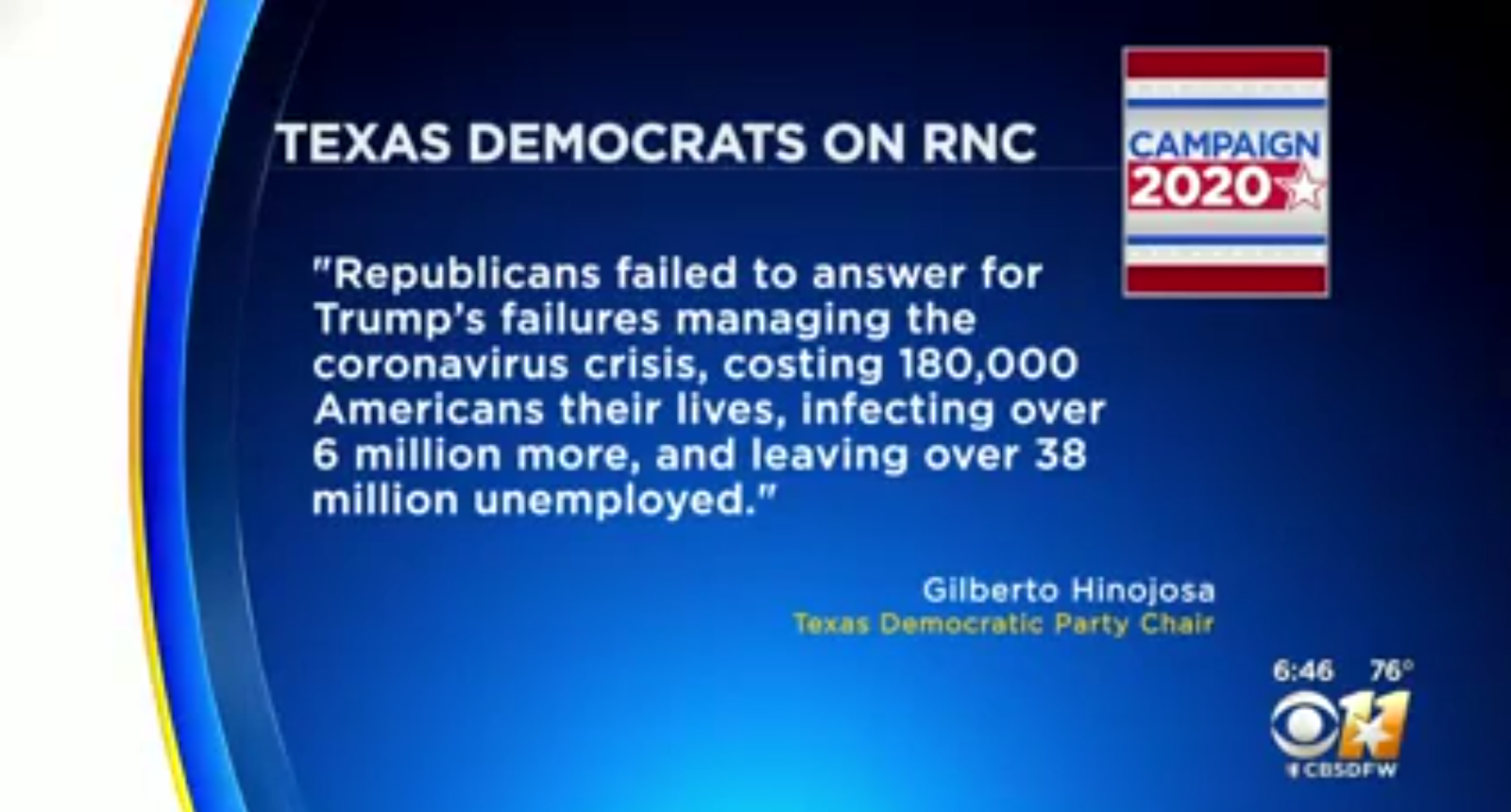 El Paso Times: U.S. Rep. Joaquin Castro: President Trump wants to turn American dream into nightmare for Latinos. “What President Donald Trump dangerously calls an immigrant ‘invasion’ — deeply disturbing white nationalist language that the El Paso shooter echoed —  countless families over the course of our nation’s history would call the pursuit of the American dream: A journey of hope, hard work and an unflagging belief in America. In that spirit, my grandmother often worked two or three jobs at a time to give her daughter and her grandchildren a better chance in life. Today, I’m sad to say that under Trump, the American dream my grandmother believed in so fiercely has turned into a living nightmare for many people, but especially for Latinos.”

Blue Virginia: Virginia Democrats Call Out Trump’s Broken Promises That Have Left the Economy In Crisis Ahead Of Day Two Of Republican National Convention. “‘Donald Trump and his campaign will try to spin the economic numbers every which way during their convention this week, but Virginians know the truth. His incompetence has caused a devastating recession that has destroyed nearly 300,000 jobs in Virginia in less than a year. At the start his presidency Trump inherited a strong economy from the Obama-Biden administration. But just like everything else he inherited, Trump squandered it,’ said DPVA Communications Director Grant Fox.”