State Sen. Rhonda Fields on KMGH: “‘There were so many points of not factual information … it was just a fantasy, their whole projection of what they were telling the American people.’ Fields also says she takes issue with the word ‘hope’ in the Trump campaign — she says the President has only created chaos.” 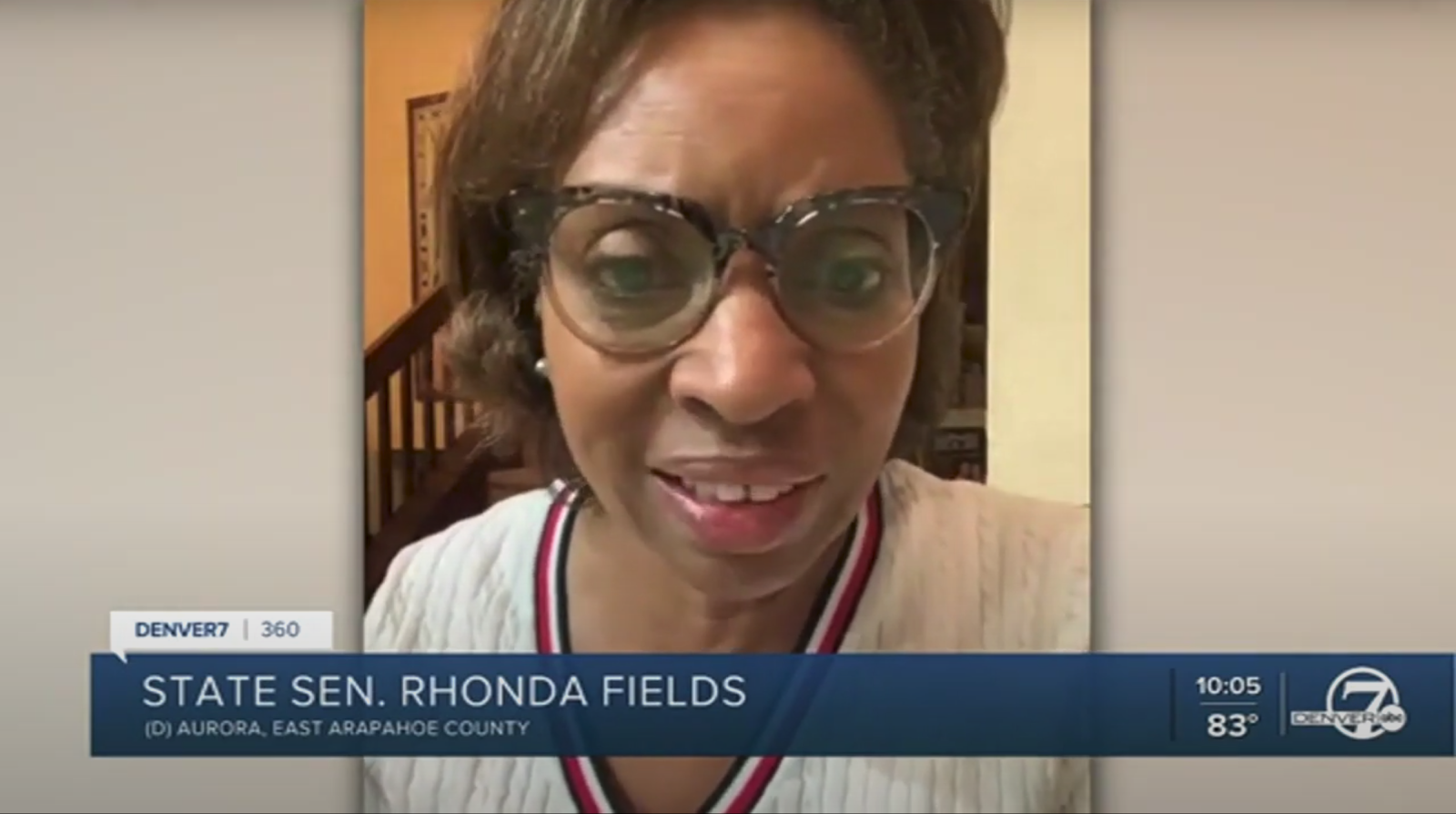 WMFE: Florida Democratic Leaders Condemn President Trump’s Coronavirus Response Ahead of Republican National Convention. “Florida Democrats held a press conference today ahead of the Republican Convention to push back against President Donald Trump’s coronavirus response. Democratic Congresswoman Donna Shalala said Trump goes into the convention with Floridians’ blood on his hands … ‘His chaotic leadership has left our unemployment in double digits and he’s failed us with no plan to confront the virus, no plan to open our schools.’”

Florida Politico Playbook: “Democrats are planning their own ‘counter programming’ designed to try to take away media attention from the RNC by focusing on Trump’s ‘chaotic leadership and failed presidency.’ Biden’s Florida campaign and the Florida Democratic Party are planning multiple virtual press conferences running between today and Thursday.”

Sarasota Herald Tribune: Florida didn’t get the Republican convention, but state is still a focus. “Florida Democrats held a news conference Monday to highlight ‘How Trump’s chaos presidency caused a crisis for Florida’s families.’ Biden’s campaign also sent out a memo criticizing the president’s record as it relates to Florida. ‘The Trump campaign is expected to spend the week spinning fairy tales about Trump’s record, but the truth is that his time in office has been marked by chaos, crisis and a failure in leadership – and Florida has been one of the states hit hardest,’ read the memo from Biden for President Florida state director Jackie Lee.

The memo went on to note that Florida is a ‘global epicenter’ for the coronavirus and argues that ‘Trump’s failed handling of the coronavirus caused joint health and economic crises for families.’”

Bangor Daily News: Maine Lobster Union Representative: Trump’s failed trade war has drowned Maine’s lobster industry. “The year before Trump was sworn in as president, Maine’s lobster industry was flourishing. In 2016, we landed 132 million pounds of lobster worth $540 million. And New Englanders made up only a portion of the consumers in our market — the largest buyer of lobster in the U.S. is actually China. Or at least it was, before Trump took office. His trade war led China to impose a 35 percent levy on American lobster, which meant buyers in China purchased their crustaceans from Canada instead. And until just last week, the European Union had a tariff on American lobster. As a result, in the span of one year, our lobster exports to China and Europe have been cut in half, costing lobster fisherman millions of dollars.”

News Center Maine: “‘Throughout the week, we’ll be highlighting Trump’s failure with Maine families, small businesses and union members, as well as threats to Maine people’s livelihoods with his attempts to dismantle the Affordable Care Act and defund Social Security … We’ll also highlight how Trump’s permanent elimination of the payroll tax, if successful, would impact Maine people in towns and counties across the state.’”

Detroit News: “The Michigan Democratic Party couched the first night of the convention as ‘full of spin and outright lies.’ ‘The truth is this: Donald Trump’s chaotic leadership has been devastating for Michigan,’ party spokesman Christian Slater said. ‘His failures have cost countless Michiganders their jobs and their lives as this pandemic continues its relentless spread.’”

WLNS: State Democrats Discuss COVID-19 Impact On Schools. “‘We’ve got to change course here and get leadership that will actually take education seriously — from pre-K through K-12 to higher education — so we can get this pandemic under control and get our kids back to school.’” 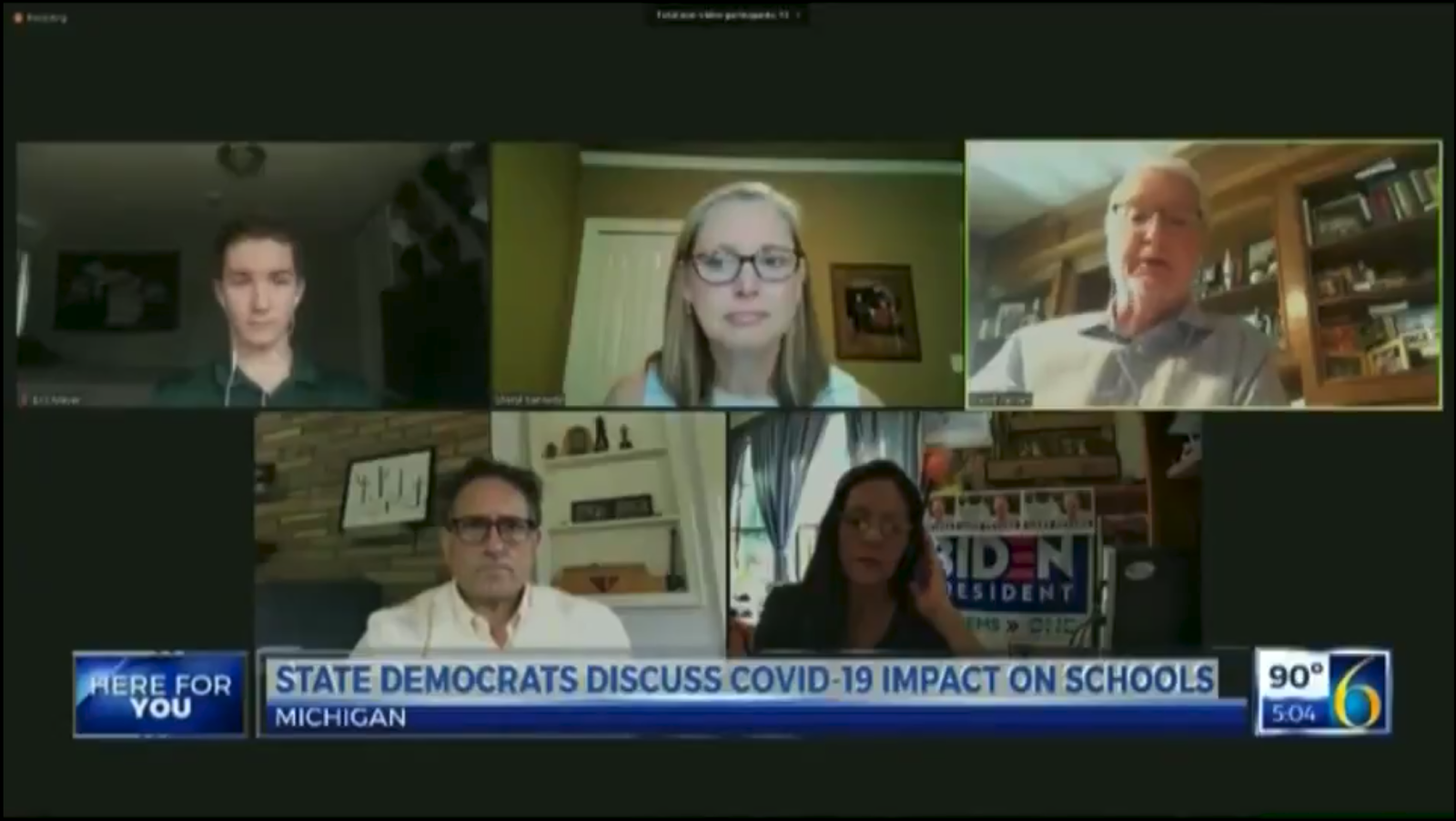 MedCityBeat: Dr. Aleta Borrud: It’s worth repeating — we still need to listen to the experts. “People are worried about whether they can send their kids to school. They’re worried about whether their small business can survive staying closed. Some businesses may never reopen, which leads to layoffs and people losing their employer-based health insurance. It didn’t have to be this bad, but Donald Trump and Mike Pence failed the test of leadership when we needed it most.”

Star Tribune: “Democrats are drumming up support for their candidates through calls, texts and digital applications rather than in-person events. Their contact with voters has increased compared to before the coronavirus, particularly in Greater Minnesota, said state DFL Party Chairman Ken Martin … The president has fallen short of many of his 2016 campaign promises, Martin said, noting that unemployment has hit record highs during the pandemic and Trump has failed to show leadership in taking on COVID-19.” 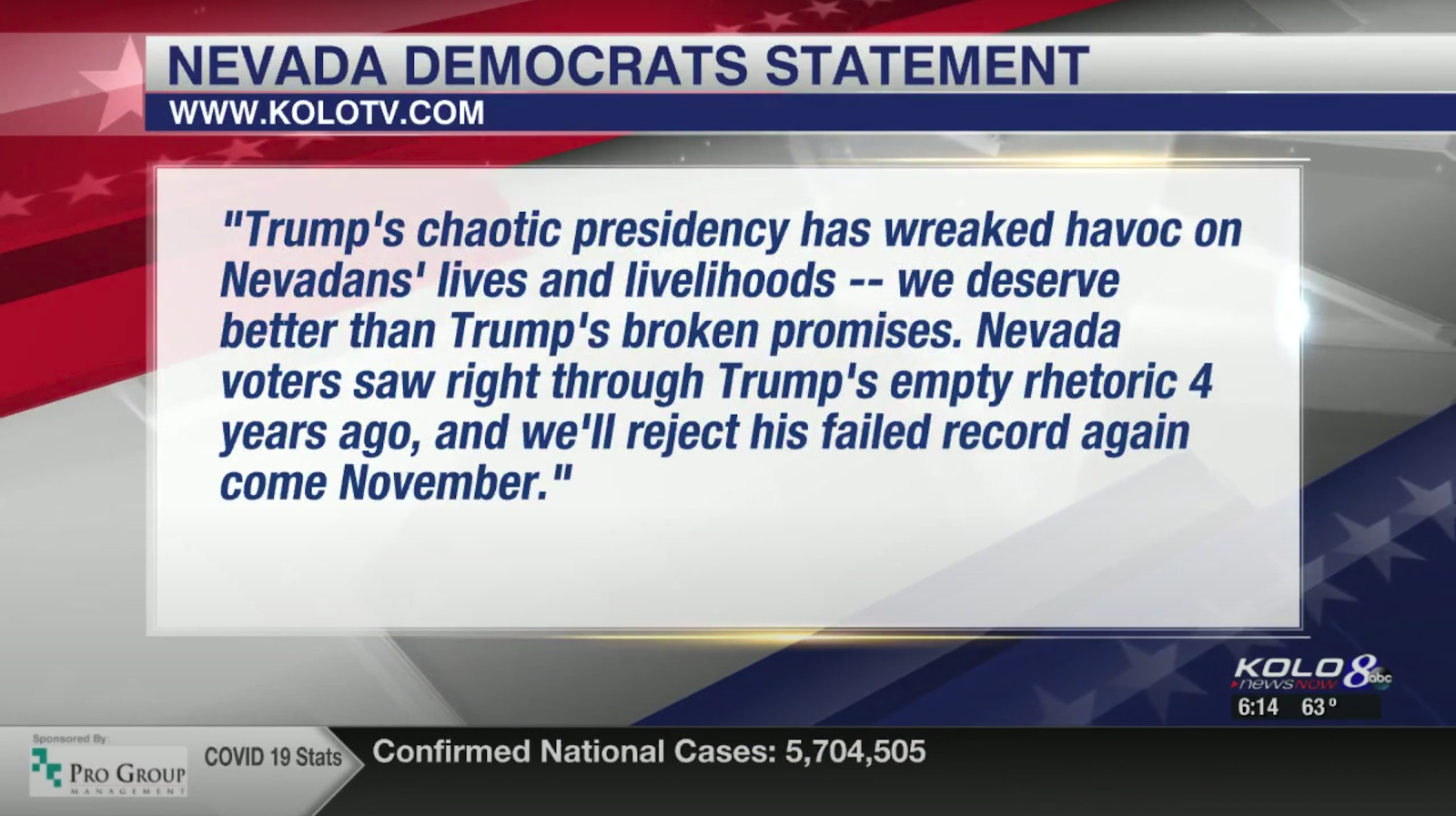 KLAS: “‘In response to the first day of the RNC, Nevada Democrats joined community leaders by phone to discuss what needs to happen on Election Day. ‘It’s really important that on day one, we are ready as a country to undo the mess that Trump and his cronies have created in the White House.’” 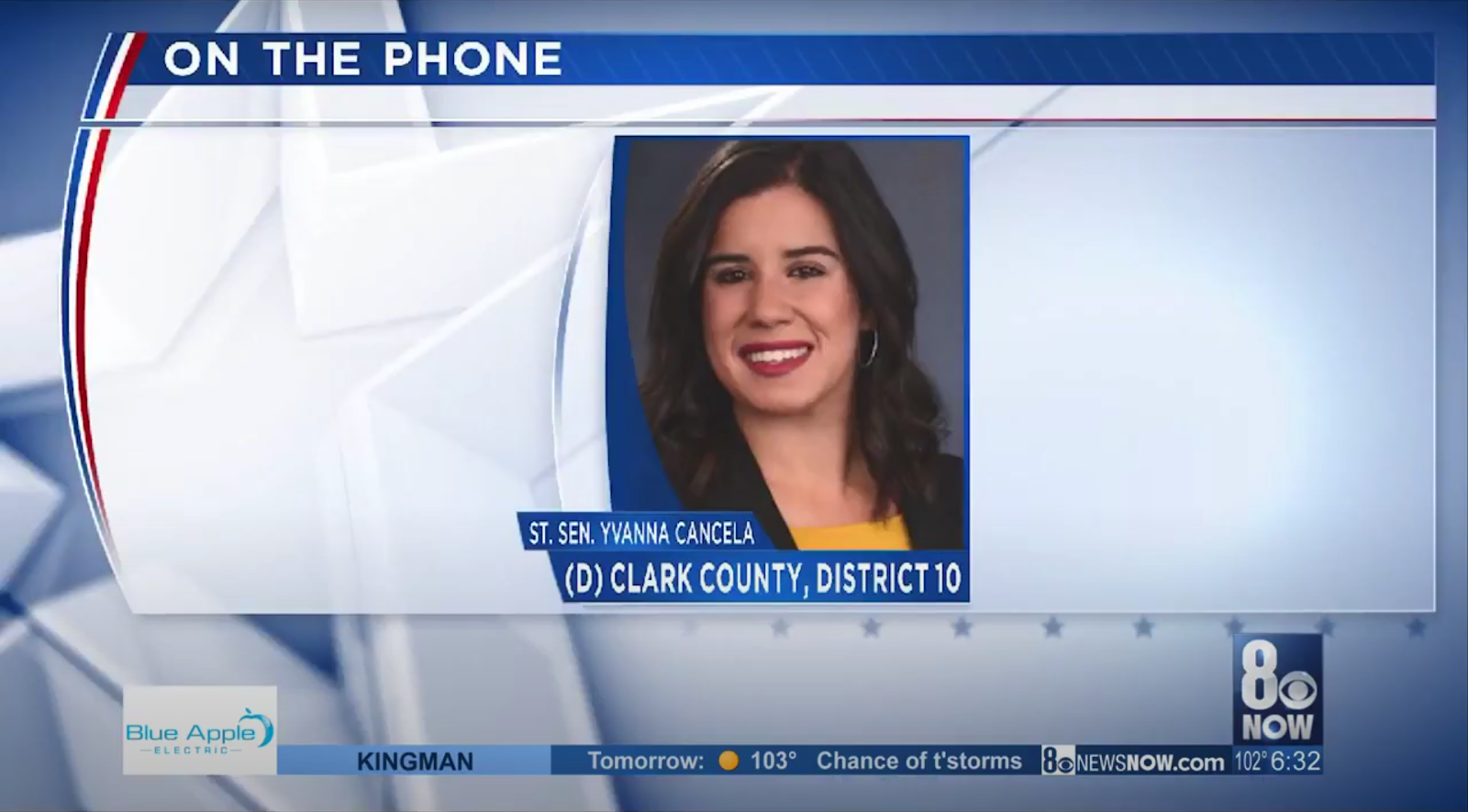 DNC Chair Tom Perez on Boston Public Radio: “We can’t fix the economy until we fix the pandemic, and that’s something Donald Trump has failed to understand from the outset. If you do not fix the pandemic, you cannot fix the economy. Joe Biden has a proven track record, whether it was H1N1, Ebola, he understands what needs to be done, and what needs to be done is federal leadership. Don’t attack state and local governments, work with state and local governments. Lead. Donald Trump doesn’t get that. So Joe Biden has a very aggressive plan to rebuild the economy … and we’ll get it done.”

Boston Herald: “‘Thanks to Trump’s failed and chaotic mismanagement, seniors will be left out to dry when he bankrupts Social Security, while thousands of Granite Staters risk losing their health care thanks to his constant work to repeal the Affordable Care Act,’ [New Hampshire Democratic Party spokesman Will] Rasky added. ‘New Hampshire is ready to turn the page in November by firing Donald Trump and electing Joe Biden to restore real leadership to the White House.’”

News & Observer: “‘The message going into the Republican convention is Donald Trump’s presidency is the chaos presidency,’ said state Democratic Chair Wayne Goodwin. ‘And working families are paying the price with their livelihoods and their lives.’”

Charlotte Observer: “Democrats dismissed the president’s remarks. ‘Republicans promised that Trump would deliver an uplifting message to the American people, but what we just heard was more of the same,’ spokeswoman Lily Adams said in a statement. ‘The same lies. The same incoherence. And the same incompetence. As Americans suffer through a health care crisis and economic recession fueled by Trump’s chaos, he hasn’t found a new tone, he’s doubled down.’ Democrats, meanwhile, released a new TV ad in North Carolina that features images of the Spectrum Center, the original site of the RNC. ‘Welcome to the RNC — Republican National Chaos,’ it says, accusing Trump of mismanaging the pandemic response.”

WNCN: “In a conference call with reporters Monday, Democratic National Committee Chair Tom Perez focused on Trump’s handling of the COVID-19 pandemic. North Carolina’s unemployment rate increased in July to 8.5 percent from 7.6 percent in June, the state Department of Commerce reported Friday. ‘People have paid with their jobs, their savings and even their lives because Trump refused to listen to the experts,’ Perez said. ‘You won’t hear Donald Trump ask the question that Ronald Reagan once asked, ‘Are you better off now than you were four years ago?’ because for North Carolinians the answer to that question is a resounding no.’”

Asheville Citizen-Times: Biden’s NC team lays out plan to turn state blue. “On the day President Donald Trump came to North Carolina to accept the Republican nomination, former Vice President Joe Biden’s campaign released new details on how it plans to turn the state blue this November. In a memo Monday, Biden for President state director L.T. McCrimmon said her team will lean on virtual efforts to connect with residents during the pandemic.”

Portage County Commissioner Kathleen Clyde on WSPD: “Joe Biden is part of a ticket that has won Ohio twice. I think he’s the type of candidate that can appeal broadly … Republicans, moderates, independents — I think that they are going to give Joe Biden and Kamala Harris a serious look. And, I welcome that and think that we have a lot to offer people who want to see an end to this chaotic presidency that we’ve endured for the last four years.”

WHP: Democrats Unveil RNC Counter-Convention Programming. “The Biden Victory Coordinated Campaign in Pennsylvania holding a ‘weekend of action’ under the ‘Uniting America’ frame, a key message of unity underscored by Joe Biden’s nomination speech and the DNC. This upcoming week, the events will spotlight families in crisis, the economy, health care, and protests in response to systemic racism.”

Pittsburgh City Paper: Democratic National Committee is buying all ads on The New Pittsburgh Courier homepage for four days. “Starting today, the DNC is buying all the online ads on the homepage of the New Pittsburgh Courier, Pittsburgh’s Black newspaper and one of the largest in Pennsylvania. According to a press release, the digital advertising takeover will last from today until Thursday to coincide with the length of the Republican National Convention, to remind ‘Pennsylvania voters of Trump’s failed response to the coronavirus [pandemic].’”

Houston Chronicle: “Texas Democratic Party officials almost immediately responded by reminding the public of the toll COVID-19 has taken on the state, a point the party intends to make regularly during the final 70 days of the election. More than 11,000 Texas have died and more than 3 million people in the state remain out of work.”

Spectrum News: “Abhi Rahman, a spokesperson for the Texas Democratic Party, was quick to criticize the president’s comments today. In a statement, Rahman said, ‘More than 500,000 Texans have contracted the coronavirus. 11,500 Texans are dead from the coronavirus. More than 3 million Texans remain unemployed. Oil hit zero dollars a barrel a few months ago. All because of Donald Trump’s failed leadership. Now, Trump wants to take away Texans’ health insurance in the middle of a pandemic. No sitting President, even if their name was George Washington, Abraham Lincoln, or even Ronald Reagan, is going to win Texas with a track record like that.’”

Virginia Public Media: Virginia Democrats See Opportunity in GOP Convention. “The Biden campaign and the Democratic Party of Virginia will attempt to pivot the limelight from Trump’s daily convention appearance toward a handful of virtual roundtables, press calls and op-eds that they say highlight Trump’s failures on key issues ranging from health care to unemployment. With the election less than three months out, Biden backers like Rep. Donald McEachin (D-4th) feel good about the former vice president’s odds in Virginia.”

Blue Virginia: As Republican National Convention Kicks Off, Virginia Democrats Slam Trump’s Immigration Policies That Have Left Virginia’s Families In Crisis. “‘The president’s immigration policies are a crisis for Virginia’s families. Thousands of young people fear deportation, families are separated, and communities are struggling with an increase in hate crimes because of the President’s rhetoric and policies. Our Commonwealth is less safe and worse off economically because of Trump’s hateful immigration policies,’ said DPVA Communications Director Grant Fox.”