GDP Falls By Most Since Great Recession

“As Trump downplayed the threat of coronavirus, his White House was caught flat footed by the economic fallout that resulted from his complete mismanagement of this crisis,” said DNC Deputy War Room Director Daniel Wessel. “They told us we’d see ‘no material impact’ on the economy, and yet economic growth last quarter declined by the most since the Great Recession, with the worst still yet to come — leaving us grossly unprepared, and now we’re suffering the consequences.”

In February and March, the White House said coronavirus would have a negligible impact on the U.S. economy.

KUDLOW: “This is principally a public-health problem and the pandemic of course is in China, not the U.S. … Insofar as the economy, we see no material impact.” 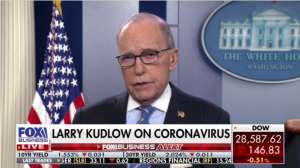 KUDLOW: “Well look, the Coronavirus is essentially a China problem, and we’re doing everything we can to help them by the way — offering advice, sending smart people over there, and so forth. It’s not a U.S. problem. The impact on the American economy will be very, very, very small if any.”

KUDLOW: “The fundamentals of the economy are strong. In fact, you know, we’ve had so many business groups in, they’ll tell you, you know, through February, January, February, the economy was rising and the Atlanta Fed GDP now is showing three percent of 3.1 percent.” [White House Media Availability, Washington DC, 3/16/20]

CEA CHAIR PHILIPSON: “I don’t think the coronavirus is as big a threat as people make it out to be.”

Larry Kudlow predicted that coronavirus would only cost the economy 0.2% GDP growth in Q1 of this year.

KUDLOW: “But, preliminary look, NEC, CEA we took a look at it. Maybe two-tenths of one percent in the first quarter.”

KUDLOW: “We really haven’t seen any economic impact. There may be some out there. Our own internal numbers say maybe two-tenths of a percent in the first quarter, but that’s not going to end this growth cycle.” 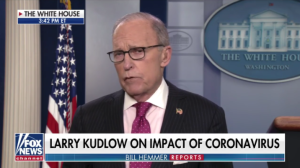 NAVARRO: “Navarro claimed that if ‘enacted in full and promptly, the positive GDP growth impacts of the payroll tax cut has the potential to completely offset any of the negative growth effects of COVID-19.’”

KUDLOW: “Kudlow played down the potential wider impact of the virus outbreak on the U.S. economy and on company supply chains that are being curtailed, saying: ‘It’s not a catastrophe. It’s not a disaster.’… Kudlow said he thought the virus outbreak could spur business investment and lead to increases in production in the United States.” 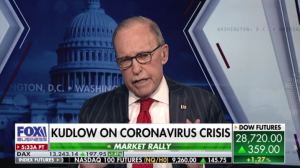 ROSS: “‘So I think it will help to accelerate the return of jobs to North America,’ Mr. Ross said of the coronavirus. ‘Some to U.S., probably some to Mexico as well.’” 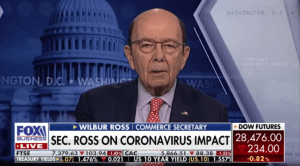