You may have missed what happened last night, and we don’t blame you, considering a vote didn’t happen until nearly 2 am, but it did not go well for American taxpayers. The Republican-passed tax bill would raise taxes on millions of middle-class families, leave millions more without health care and cause premiums to skyrocket. The process was a partisan disaster, but Republicans were determined to deliver a gift to their donors, and huge tax giveaways to corporations and the top 1%.

Republicans forced through a historically unpopular bill at nearly 2 am, mere hours after releasing it, and without any Democratic votes.

FiveThirtyEight: “Poll after poll shows that more voters than not are opposed to their efforts. In fact, the GOP bill is one of the least popular tax plans since Ronald Reagan’s day.”

The Republican bill already drastically benefited the wealthy at the expense of middle-class families, but late additions made it even worse.

Washington Post: “What began as an effort that would favor wealthy individuals and corporations became, in many ways, even more tilted in their favor as the legislation made its way through the Senate.”

The Republican tax bill was written by, and for special interests. The list of amendments to the bill even came directly from Washington lobbyists.

Senator McCaskill: “This is so bad. We have just gotten list of amendments to be included in bill NOT from our R colleagues, but from lobbyists downtown. None of us have seen this list, but lobbyists have it. Need I say more? Disgusting. And we probably will not even be given time to read them.”

Every Republican senator voted against allowing more time to read the text of the bill before voting on it.

Bloomberg’s Sahil Kapur: “Senate votes 48-52 to reject Schumer’s motion to adjourn until Monday to give senators time to read the legislation.”

Multiple nonpartisan analyses found that the Republican bill will add close to $1.5 trillion to the deficit, but Republicans forced the bill through without waiting to see the full impacts.

An hour after the vote, the Senate’s nonpartisan official scorekeeper, the Joint Committee on Taxation, released their modified analysis showing that the Republican tax bill would add nearly $1.5 trillion to the deficit.

The Hill: “The Senate GOP tax plan will increase the deficit by more than $1.4 trillion over a decade, according to a new analysis by the Congressional Budget Office (CBO). The CBO score comes as senators are already voting on amendments to the legislation and are expected to pass the bill in the early morning hours of Saturday.”

New York Times’ Jim Tankersley: “McConnell: ‘I’m totally confident this is a revenue neutral bill. Actually a revenue producer.’ Republicans did not produce a single study that came close to backing that assertion up.”

And we still can’t read what’s actually in the bill. 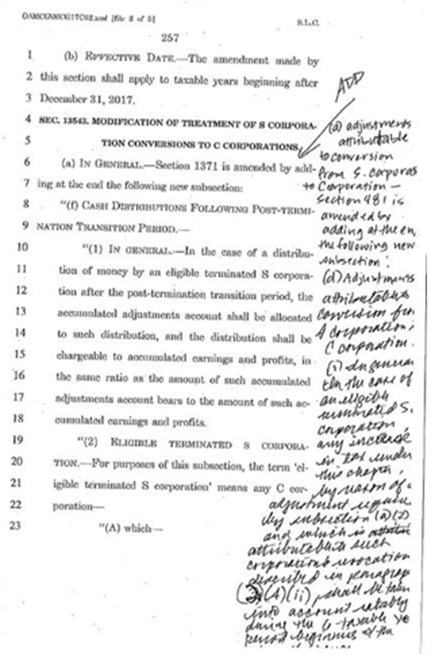