In The Battlegrounds: Democrats Are Ready To Win in 2020

One year from Election Day 2020, Democrats on the ground are ready to hold Trump accountable for his broken promises.

One year out from the 2020 election, Democratic state parties across the country are building the infrastructure our eventual nominee and candidates down the ballot will need to win and holding Trump accountable for his broken promises.

See for yourself (and read more about the DNC’s general election programs here): 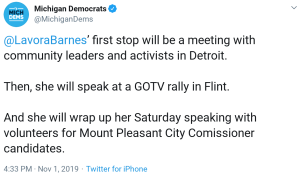