Ivanka Trump is a Hypocrite

“While Ivanka Trump is busy writing op-eds calling on American companies to ‘create more jobs, strengthen our economy and restore hopeful futures to countless families,’ workers in countries like Indonesia, China, Vietnam, Bangladesh, and India are busy too – working in conditions below industry standards to manufacture clothing and shoes for the first daughter’s namesake brand.

“The first daughter and special adviser to the president loves to portray herself as a champion for working women, but one look inside the overseas factories where she chooses to manufacture her products proves that she is anything but. The women manufacturing ‘Ivanka Trump’ clothes and shoes are paid so little that many of them are forced to live without their own children.

“The American people will not be fooled by the Trumps’ political publicity stunts calling for the creation of more American jobs, and they won’t fall for Ivanka’s faux feminism. The reality of how this family runs its own businesses is clear: choosing not to buy American, hire American, or make meaningful investments in American workers.” 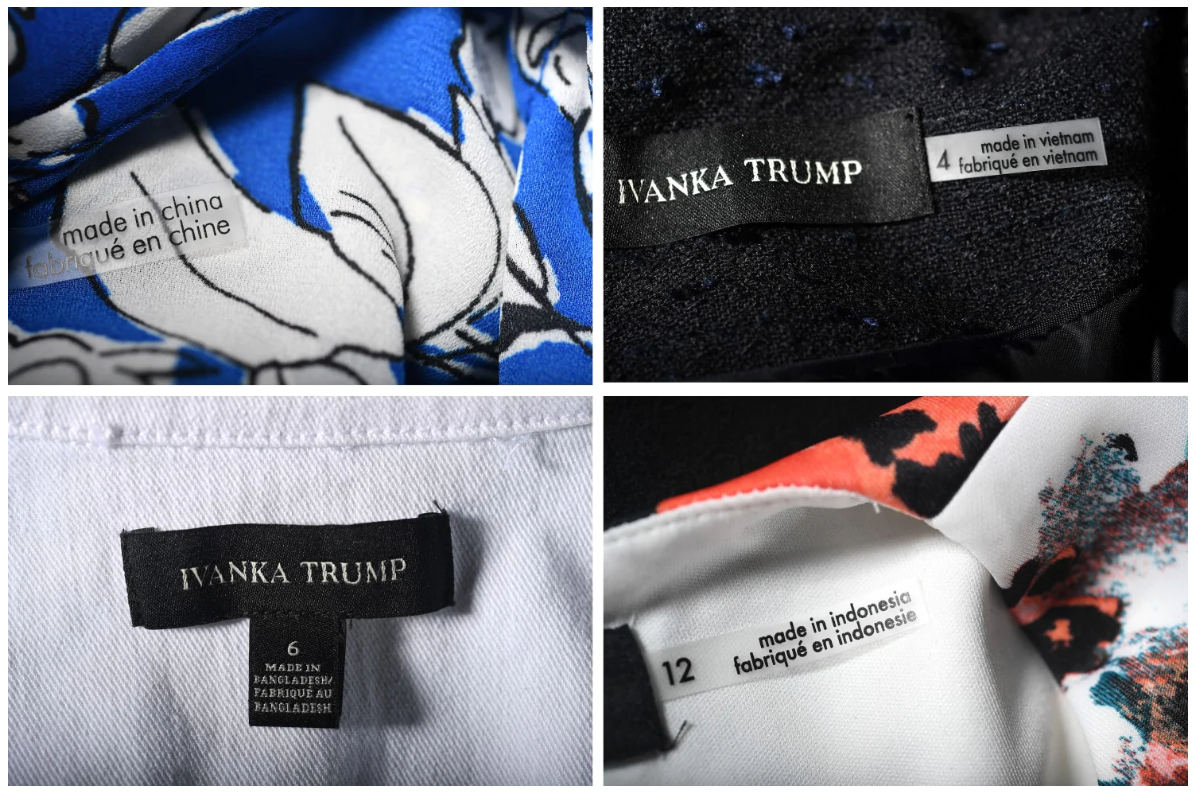 “In China, where three activists investigating factories making her line were recently arrested, assembly-line workers produce Ivanka Trump woven blouses, shoes and handbags. Laborers in Indonesia stitch together her dresses and knit tops. Suit jackets are assembled in Vietnam, cotton tops in India and denim pants in Bangladesh — a country with a huge apparel industry where garment workers typically earn a minimum wage of about $70 a month and where some have recently faced a harsh crackdown from factory owners after seeking higher pay.

“And in Ethi­o­pia, where manufacturers have boasted of paying workers a fifth of what they earn in Chinese factories, workers made thousands of pounds of Ivanka Trump-brand shoes in 2013, shipping data show.

Refinery29: Ivanka Wants Companies To “Hire American” — Her Brand's Clothes Are Made Overseas.

“Ivanka Trump-branded dresses hail from in Indonesia, her suit jackets are made in Vietnam, denim pants are created in Bangladesh, and shoes turn out to be from Ethiopia… We guess ‘hiring American’ is easy to say as long as you don't have to put your money where your mouth is.”

“The president’s Mar-a-Lago resort in Palm Beach, Florida, which he calls the ‘Winter White House,’ has asked for approval to hire 78 foreign workers—40 waiters, 21 cooks and 17 housekeepers—for the coming winter, according to Department of Labor data obtained by Newsweek last week.”

The Guardian: Revealed: Reality of life working in an Ivanka Trump clothing factory

“The reality of working in a factory making clothes for Ivanka Trump’s label has been laid bare, with employees speaking of being paid so little they cannot live with their children, anti-union intimidation and women being offered a bonus if they don’t take time off while menstruating. The Guardian has spoken to more than a dozen workers at the fashion label’s factory in Subang, Indonesia, where employees describe being paid one of the lowest minimum wages in Asia and there are claims of impossibly high production targets and sporadically compensated overtime.”

“The First Daughter's line has come under fire in recent months for a variety of issues, among them the news that activists investigating Ivanka Trump’s factories in China had gone missing, and the release of an audit by industry monitoring group Fair Labor Association that revealed a wide range of labor violations in factories that produce Ivanka Trump clothing.”

Quartz: Ivanka Trump, champion of working women, hasn’t done much for those making her brand’s clothes

“Hundreds of clothing lines and manufacturers have funded efforts to improve the safety of factories in Bangladesh. Yet neither the Ivanka Trump brand or the clothing distributor from which it licenses some production has contributed.

“Ivanka’s company doesn’t inspect the factories where its workers produce its clothes, nor does it, like some other small apparel brands, hire a third-party company to do so. The company does not publish a list of factories that produce its goods, a trend among apparel companies. It told the Post it has no plans to do so.”

“While it's quickly becoming more and more common for brands to provide more detailed information to consumers about the factories where its products are manufactured, pushing for change, and hiring auditors to monitor labor conditions, the Ivanka Trump brand had done no such thing.

“This, even as the brand seeks to align itself even closer with Ivanka's own stated political agenda of championing working women and mothers. Quite the contrary, in fact, as the Post finds Trump clothing is manufactured by mothers who have to leave their children with their own parents and can only see them on weekends, or in some cases, just once a month.”