Tim Michels: “But I think in the end, what I would try and tell them is: There’s a life in there, a life that was created by God. And if you carry that baby full term, there’ll be 25 or 35 couples that will be there willing and ready to adopt that baby, and love it, and raise it as their own.”

That’s just the tip of the iceberg for Michels’s anti-choice extremism. Michels called Wisconsin’s 1849 abortion ban with no exceptions for rape or incest “an exact mirror” of his position – and even went so far as to say that it’s “not unreasonable” to force a victim of rape to give birth. 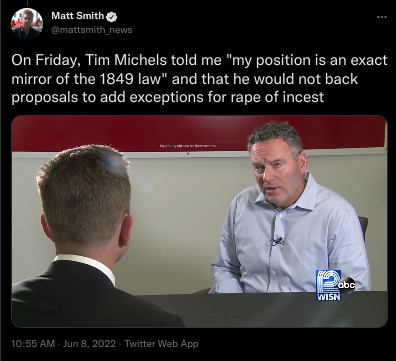 This is the state of today’s Republican Party: Arguing that child rape victims should be forced to give birth. Anti-choice extremism is the GOP party line, and Americans cannot afford their dangerous, anti-choice agenda.