MEMO: One Year Out, The DNC Is Preparing To Win The General Election

RE: One Year Out, The DNC Is Preparing To Win The General Election

One year from the presidential election, Democrats are making historic, early investments to build the general election infrastructure our eventual nominee will need to win. Meanwhile, Trump is facing major headwinds across the battleground states and his standing with voters is crippled by his record of broken promises. Here’s the state of the race:

Nationally, Trump’s net approval has averaged lower than any president in modern history according to FiveThirtyEight:

Polling from Morning Consult also shows his net approval in every major battleground state has decreased by double digits: 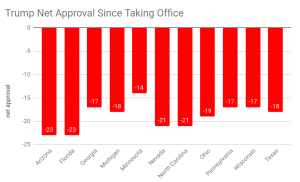 He’s also badly damaged his standing with key subgroups, like suburban voters. Only 32 percent say the would vote to reelect him according to the Grinnell College poll and NBC-Wall Street Journal polling found 61 percent of suburban women disapprove of Trump and prefer a Democratic candidate by 29 points.

Democrats are taking nothing for granted and the DNC and Democratic state parties are working now to lay the groundwork for the general election. Here are some of the programs already underway:

The bottom line: Democrats are preparing now to win in 2020

Democrats are taking nothing for granted and laying the groundwork across a wide battleground map so that our eventual nominee can defeat Trump in 2020.

Unlike in 2016, Trump has a record and he’s left behind a trail of broken promises: his health care agenda spikes costs and jeopardizes coverage protections for people with preexisting conditions, his tax scam will end up hurting the middle class in order to give more handouts to his rich, powerful friends, and his chaotic economic policies are costing us jobs. At every turn he is looking out for himself, hurting hardworking Americans, and in one year voters will hold him accountable.