Perez On 100 Days Out Democrats are “Organizing Everywhere…We Are Not Wasting A Moment.”

This weekend on MSNBC, DNC Chair Tom Perez laid out the Democrats’ approach 100 days out from the election: organize everywhere, take nothing for granted and reach every voter we need to win.

Tom Perez: “The best antidote to all this fearmongering from Donald Trump is for us to turn out, to turn out in force like we have done in the primaries — that’s exactly what we’re doing in the Democratic Party. This is another Weekend of Action, where we are going across the country in these critical battleground states, we take nothing for granted. We’re organizing everywhere, and voters understand that this president has put their lives at risk, he’s put their jobs at risk, he has upended the guardrails of democracy. And what I think the best thing that we can do as Democrats, Independents, former Party of Lincoln Republicans, is come out, vote in force…we’ve got 15 Sundays until the election. We are not wasting a moment.” 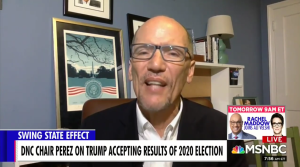 And across the battlegrounds, Democratic enthusiasm — coupled with the hard and effective organizing work — is leading Democrats to crush Republicans in key metrics like registration, participation and voting by mail. See for yourself: