RNC Goes All In and Fails…Again.

Let’s be perfectly clear here: The RNC was anything but shy when it came to supplying a steady stream of support for their candidate Rick Saccone. Top RNC officials made it crystal clear that they were leaving it all out on the field in PA-18.

RNC Chairwoman Ronna McDaniel: “The RNC has made over a million voter contacts. We're working as hard as we can to elect Rick Saccone. And we know that we're going to have to do battle all across this country to keep these majorities.” [Your World With Neil Cavuto, Fox News, 3/12/18; Video]

RNC Chairwoman Ronna McDaniel: “We’ve worked as hard as we can. We brought the president in. And we’re hoping for a win, because the president needs reinforcements.” [The Larry O’Connor Show, WMAL, 3/13/18; Video]

RNC Spokesperson Kayleigh McEnany: “Our hope that President Trump coming to the district pushes him over the top. This is Trump country. Make no mistake about it.” [Making Money With Charles Payne, Fox Business, 3/12/18; Video]

But the RNC provided more than just talk. Along with other outside groups, Republicans poured more than $10 million into the race in an effort to bail out their candidate.

The Hill: “The RNC has spent heavily in the district to lift Saccone over his Democratic rival Conor Lamb— an RNC official told The Hill the party will ultimately have spent $1.4 million there through Tuesday's election.”

CNN: “Nearly $10.7 million — about 80% of the outside spending in the district — has gone to boost Republican candidate Rick Saccone or oppose Democrat Conor Lamb.”

They even sent Trump. Twice.

Associated Press: “Trump has made one visit to the district, and on Friday announced that he will return for a March 10 rally.”

RNC Chairwoman Ronna McDaniel highlighted her visit with Trump too. 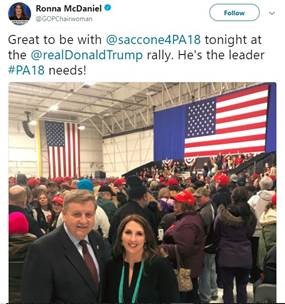 Their best efforts fell flat. Their message was a mess. They spent millions defending tax breaks for corporations and Republican efforts to strip Americans of health coverage.

Los Angeles Times: “The most dangerous outcome for Republicans in Tuesday's special House election is not the prospect of a Democrat taking over one of their seats. It was the shrugging off by voters of the party's biggest legislative achievement: the tax cut measure that Republicans hoped would be their major campaign message as they head toward a turbulent midterm election.”

Vox: “…Republican candidate Rick Saccone, who described himself in November as ‘Trump before Trump was Trump,’ officially lost to Democrat Conor Lamb in a district the previous Republican representative had run unopposed in twice. Trump carried the district by 19 points in 2016.”