The Chaos Continues, Despite Trump’s Denial

Trump said in a tweet this morning that there is no White House chaos. Well, there is, and Americans agree, with a majority using the word “chaos” to describe the Trump administration. The increasing turmoil and disarray in the White House has Trump’s supporters shaken and the Republican Party’s agenda stalled. With no end in sight, Trump’s new chief of staff and Republicans have quite the road ahead of them. 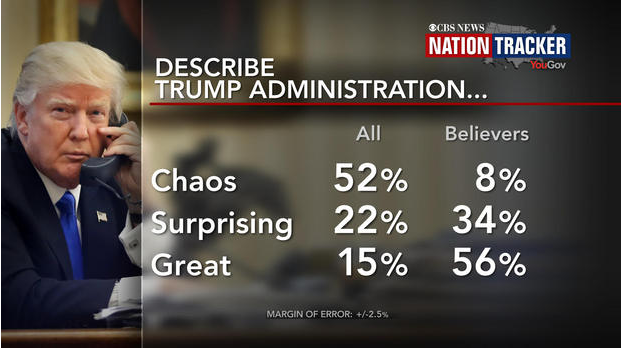 “President Trump and Republicans in Washington have shaken the confidence of their supporters after a punishing and self-inflicted series of setbacks that have angered activists, left allies slack-jawed and reopened old fissures on the right.”

“Republicans on Sunday urged President Donald Trump's new chief of staff John Kelly to rein in the chaos within the White House on Monday but said the retired Marine Corps general will be challenged to assert control.”

“Retired Gen. John Kelly, previously the Homeland Security secretary, takes over Monday from the ousted Reince Priebus. Trump hopes Kelly can bring some military order to an administration weighed down by a stalled legislative agenda, a cabal of infighting West Wing aides and a stack of investigations.”

“Republicans are facing serious doubts about their ability to enact big portions of their agenda in the wake of the collapse of their ObamaCare repeal effort and turmoil at the White House.”

“After a chaotic week for President Donald Trump and his party, Republicans are facing a fundamental question: What's next?”

Newsweek: Is Kim Jong Un Exploiting The Chaos In The White House?

“But with the ongoing power struggle within the White House and a Congress that is in deep discord over health care and other major domestic issues as well as inattention to Asia and European security (especially key ties with US allies), the two countries that are benefiting from this vacuum are China and North Korea.”

“Likewise, Mr. Trump is continuing his threat to cut off subsidies to health insurance companies that offer low-income customers help in covering out-of-pocket medical expenses, like deductibles and co-payments. His threats to end such payments have contributed to instability on the individual insurance market.”

Fareed Zakaria: “There is the sheer shock at what is going on, the bizarre candidacy of Donald Trump, which has been followed by an utterly chaotic presidency. The chaos is at such a fever pitch that one stalwart Republican Karl rove described the president this week as 'vindictive, impulsive and short-sighted' and his public shaming of the attorney general as 'Unfair, unjustified, unseemly and stupid.' Another Republican, Kenneth Starr, the one-time grand inquisitor of Bill Clinton, went further, calling trump's treatment of Jeff sessions 'One of the most outrageous and profoundly misguided courses of presidential conduct I have witnessed in five decades in and around the nation's capital.'”

Steve Schmidt: “We have an administration that has the lowest approvals for any presidency in the modern history of polling. 36, 37, 35% wherever it may be. We have complete and total chaos in the West Wing. And really, with each new dawn there is another assault, another attack on the dignity of the institution of the office of President of the United States.”

Karl Rove: “Among people who are active in politics, party leaders, business leaders, community leaders, I hear an increasing, scratch their head, why can't this thing get done? Why can't Republicans govern? Why can't the President lead? Why do we have to put up with this drama?”

Richard Haas: “This juxtaposition of a world that's coughing up enormous challenges, North Korea, what's going on in the Middle East, Russia, that we have as crowded and as demanding a foreign policy inbox as we've had in modern times against the back drop of an administration in disarray. The other thing we left out was health care. And all these dynamics going on in Washington, consumed by personnel issues. The world doesn't say, okay, we're going to give you six months or a year to time out, America. The world doesn't go on pause.