The first Democratic debate is in one week! 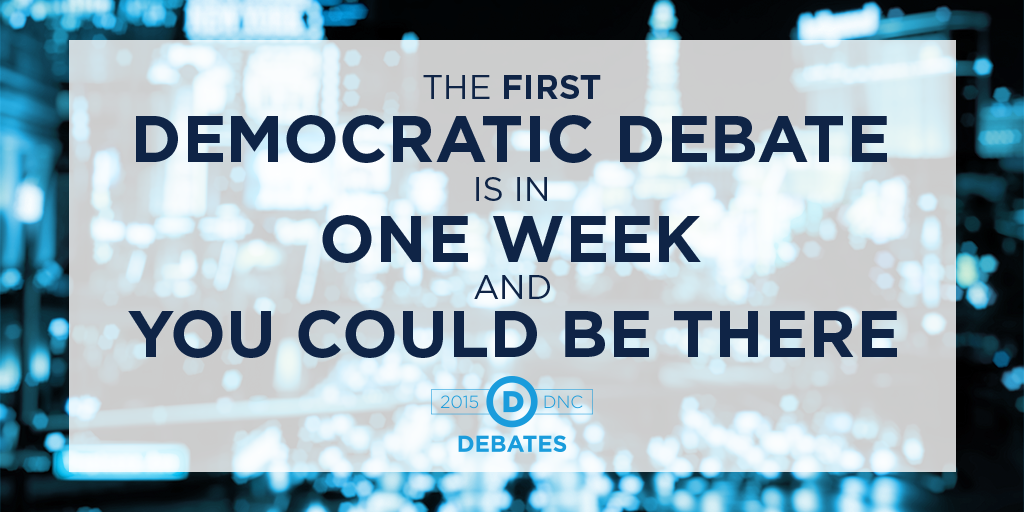 We are just a week away from the first Democratic Party presidential primary debate of the 2016 election, which will take place on the evening of Tuesday, October 13th from Las Vegas, NV! The DNC and the Nevada Democratic Party have partnered with CNN and Facebook to put on this exciting debate, and we want everyone who cares about our country’s future to watch it!

Just today we launched a contest to fly one lucky supporter and their guest out to the City of Lights for the chance to have a VIP experience and listen to Hillary Clinton, Bernie Sanders, Martin O'Malley, Lincoln Chafee, and Jim Webb as they lay out their respective visions for our country.

The choice the American people will face in next November’s election couldn’t be more important. Remember that as the last Republican administration left office, the American economy was losing 750,000 jobs a month, and that was on top of countless homes foreclosed and too many families devastated.

When our candidates take the stage in Las Vegas, it’ll become clear that ours is the Party with the vision to keep America moving forward. What’s at stake is nothing less than 13 million new jobs and 67 months of private sector job growth since 2010, health insurance within reach for millions who previously couldn’t afford it, and expanded opportunities for every American. The DNC Democratic Debates are about building on these successes.

The contrast is going to be stark, after watching a Republican field so dug in to their right-wing ways that the entirety of their debate arguments were about moving us backward.

Here’s where you come in. We don’t want what happens in Vegas to stay in Vegas.

We need you to help us get the word out, get folks watching, and then turn up the volume on what our candidates have to say. Facebook is one of our media partners for this first debate, and we want you to use their tools to organize watch parties, we need you on social media building excitement, and we need you sharing the great responses when Democrats everywhere get to see their candidates in action.

Together we can ensure that the type of conversations our candidates have already been participating in on the campaign trail – in diners and state fairs, at rallies and town halls – also take place in living rooms, union halls, and bars all across America.

So let’s roll up our sleeves and get to work. Here is the schedule of DNC-sanctioned debates as well as other upcoming opportunities to hear from our candidates, and information on how you can help get our candidates the attention they deserve.

What You Can Do

Organize watch parties! Already there are 172 County Democratic Parties hosting watch parties, with another 30 organized by State Parties all across the country. They present opportunities to:

There’s a lot of excitement in our Party about these debates, now we need that energy to help us drive enthusiasm to both watch and share! At the end of the day, we’re Democrats, we’re a big tent party, and we’ll have different views on plenty of issues. But we’re united in our commitment to fight for middle class families and hardworking Americans who’ve seen the devastating impact of the policies of the past.

Together, I know we’ll have a Party ready and working harder than ever to support whichever candidate gets to that stage in Philadelphia next July to accept our nomination. The stakes are simply too great for us not to elect a Democrat as the 45th President of the United States.

Thank you for your continued support.