Tonight twelve of the GOP’s candidates for president head to Milwaukee for a Fox Business Network debate to try to convince voters they should be put in charge of the most powerful economy on earth while telling us how awful it is. Unfortunately for them, they face a strong headwind: the facts. Economic indicators clearly show that Democrats have done a far better job of managing the economy, expanding opportunities for the middle class, reducing the deficit, and promoting job growth than their Republican counterparts in the White House. In just the past week we found out that:

Of course the naysayers in the Republican field of candidates are dismissive of unemployment numbers and wage growth. They like to point to underemployment, for example. And yet there too the underemployment rate declined to its lowest level since May 2008. Other indicators are also moving in the right direction:

Because the Republican candidates are coming to the Midwest for this debate, it’s also worth noting that it was a Democratic president who invested in rescuing the auto industry. There too the indicators are good for the Democrats, and pose a problem for Republicans:

Yet every time this crowd talks about the economy, you would think that the financial collapse of 2008 was the good old days we should want a Republican to return us to. It’s no surprise then, that at their last economy-focused event, the GOP’s standard bearers couldn’t answer the questions they were posed and chose to blame media bias. Some of the “unfair” questions they got, after all, would have required them to explain themselves. For example:

So what were the Republican candidates hiding from? 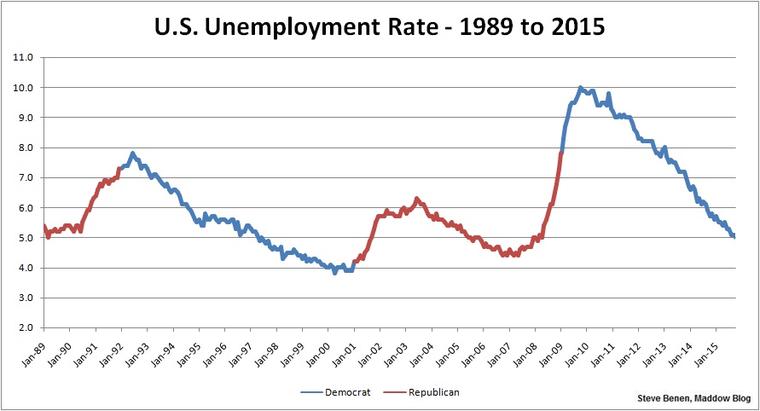 Well it turns out the policies that the Republican candidates are pushing are the same policies that were in place heading into the economic turmoil that left our country at the brink of a great depression and that during the last two Republican Administrations have preceded high unemployment. As Steve Benen reported for MSNBC, Republican presidents leave unemployment on the rise, Democrats lower it. The tax plans we’ve seen from Republican presidential contenders would give massive tax cuts to the wealthiest of the wealthy, explode the deficit, and they would shift the burden of balancing the budget onto middle-class and working families. Here’s what Marco Rubio, John Kasich, Jeb Bush, and Donald Trump have proposed so you can see for yourself:

Of course they’ll claim to have insight into all kinds of economic indicators to justify their pessimism on the economy. They’ll tell you the sky is falling. They’ll say they can make America great again. Well, they need to be held accountable.

We’ve compiled some of the leading indicators in several areas including jobs, GDP, housing, energy, health care, and of course deficits to help with that. If there is going to be a serious debate on the economy, then the real facts should be weighed against the rhetoric. The guide below summarizes what Democratic policies have meant over the last seven years, and they show exactly what’s at stake. Here’s to hoping the candidates get some tough questions tonight and aren’t allowed to just blame the moderators for not having any answers. Our economy depends on it.

Full-time employment accounting for the rise in employment since early 2010. The economy has added over 11 million full-time jobs since February 2010, with part-time employment falling over this period. While about three-quarters of part-time workers do so for family, health, and other reasons, the fraction of the labor force working part-time for economic reasons declined in October. This shift helped to drive the underemployment rate, a favorite talking point of the GOP, to its lowest level since May 2008.  Sorry guys.

The construction sector has added 233,000 jobs over the last year. With continued recovery in housing, the unemployment rate for construction workers is at 7.5 percent, having fallen below its pre-recession average (based on a twelve-month moving average of not seasonally adjusted data).

Overall, GDP has risen 2.0 percent over the past four quarters, with Real GDP rising at a 1.5 percent annual rate in the third quarter of 2015, according to the advance estimate from the Bureau of Economic Analysis.

Inflation was mostly unchanged in the third quarter. The GDP price index, which measures the price of all goods and services produced in the United States, rose 0.9 percent over the past four quarters. The price index for personal consumption expenditures rose 0.3 percent over the same period, with the “core” components (excluding food and energy) rising 1.3 percent.

Consumer sentiment remains near its highest levels in the recovery, providing continued upside for personal consumption growth. Consumer sentiment helps to predict future changes in consumer spending, which accounts for about 70 percent of GDP, and provides a timely indicator of economic strength. Falling gas prices and improvements in employment have helped to drive rising sentiment since mid-2014.

Housing prices continue to rise. Over the past year, all major home price indexes have posted strong year-over-year gains. In all, house prices have risen between 19 and 33 percent during the recovery.

Rising home prices are bringing millions back above water. Zillow Real Estate estimates that rising home prices have lifted more than 6.3 million households out of negative equity since the end of 2012. The national negative equity rate fell to 14.4 percent in June 2015—less than half its peak of 31.4 percent in the first quarter of 2012. Likewise, CoreLogic estimated that nearly 5.5 million households returned to positive equity since 2013.

Sales of distressed properties have declined dramatically over the past couple of years. Distressed homes – comprised of foreclosures and short sales – accounted for 7 percent of September sales.

The United States is less reliant on foreign oil than any time in nearly three decades. The United States produces more crude oil than it imports for the first time in 20 years. Monthly domestic crude oil production exceeded net imports by 2.1 million bpd in September for the twenty-fourth consecutive month, according to data from EIA.

The United States has vastly increased the amount of energy we harness from the wind and sun. Since 2008, electricity production from wind energy has more than tripled, and solar generation has increased twenty-five fold.

Petroleum consumption from gasoline has fallen significantly as fuel efficiency standards continue to rise. New fuel economy standards will nearly double light-duty vehicle fuel economy between 2010 and 2025, increasing standards to the equivalent of 54.5 mpg for cars and light-duty trucks by Model Year 2025. Standards for medium- and heavy-duty vehicles will also substantially raise fuel economy through 2027, cutting tractor trailer fuel use by 24 percent.  That will save consumers more than $1.7 trillion at the gas pump and reduce U.S. oil consumption by 12 billion barrels over the lifetimes of vehicles sold through 2025.

Premiums for employer-sponsored insurance grew just 4.2 percent in 2015, and the last four years have recorded four of the five slowest growth rates on record back to 1999. The Kaiser Family Foundation’s annual survey found that the average premium for employer-sponsored family coverage rose just 4.2 percent in 2014, far below the 7.9 percent average rate seen from 2000 through 2010.  Had premium growth since 2010 matched the average rate over the preceding decade, the average premium for family coverage would have been nearly $2,600 higher in 2015.

Since August 2010, the Congressional Budget Office has reduced its projections of Medicare and Medicaid spending in 2020 by $175 billion. This decline represents a 13 percent reduction in projected spending and primarily reflects the recent slow growth in health care spending.

Under President Obama, the deficit has fallen by about three fourths since 2009, measured as a share of the economy. The federal deficit in fiscal year 2015 was 2.5 percent of GDP, the lowest level since 2007 and about one quarter of the 9.8 percent of GDP deficit recorded in 2009. The 2015 deficit as a share of GDP was well below the average over the last 40 years. This progress reflects both a stronger economy and the deficit reduction the President has signed into law.

The President's policies are contributing to the most rapid deficit reduction since the end of World War II. The last time deficits fell at a faster rate as a share of the economy over a comparable period of time was during the post-war demobilization from 1945 to 1951.