Trump And Republicans Help CEOs & Leave Everyone Else Behind

The Trump and Republican economic agenda has increased the gap between CEOs and everyone else. CEO have benefitted with tens of billions of dollars, while workers’ wages have not increased. See for yourself:

Axios: “The CEOs running S&P 500 companies cumulatively took home $10 billion in 2017, an amount that is 44% higher than what is usually reported, according to an Axios analysis of Securities and Exchange Commission filings.”

That was before Trump and Republicans gave corporations massive tax breaks, which CEOs have used to enrich themselves enormously.

CNN Money: “Flooded with cash from the Republican tax cut, US public companies announced a whopping $436.6 billion worth of stock buybacks, according to research firm TrimTabs.

Meanwhile, real wages for workers have declined. The average household is living on $59,000 a year.

Axios: “Meanwhile, worker wages are stagnant, the average household is living on $59,000 a year, and income inequality has become one of the most visible political rallying cries.” 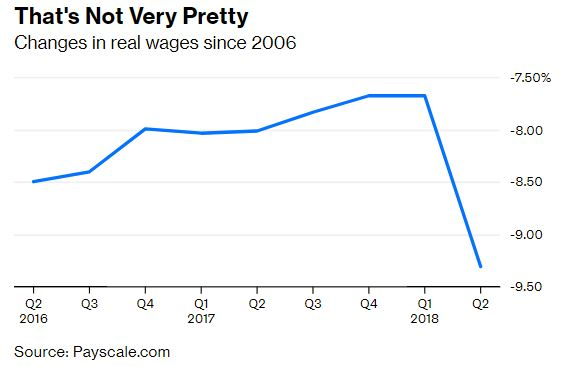