Trump And The NRA, One And The Same

What can we expect from Trump at CPAC today? One look at coverage over the past 24 hours and it’s clear: we can expect the same thing we heard from the NRA yesterday. Trump has chosen to stand in lockstep with the NRA rather than with the thousands of students across the country speaking out for common-sense gun reforms. See for yourself: 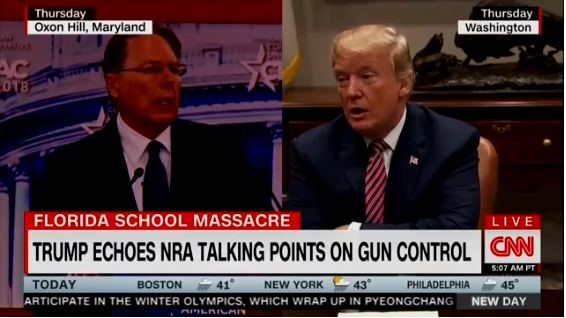 NPR: “Trump Appears To Read From The NRA's Script Hours After The Gun Lobby Chief's Speech”

TIME: “The NRA's Wayne LaPierre and Trump Are Using the Same Playbook to Respond to Parkland”

The Hill: “Trump says he and NRA are on same page”

Daily Beast: “Trump Aides Confess: He Only Hears the NRA”

The Hill: “Trump praises NRA leaders: 'They love our country'”

Axios: “Trump defends the ‘Great American Patriots’ at the NRA”

Washington Examiner: “Trump defends NRA: 'They love our country and will do the right thing'”

CNN: “Trump defends the NRA as a group of 'patriots' who want to 'do the