We already expect Donald Trump’s Twitter feed to be filled with troubling, unhinged rants, but yesterday he went into overdrive, lobbing unhinged tweets all day. The American people are turning against Donald Trump; it’s driving him up the wall and his administration into a tail spin.

Here are just some of his recent bad polls that have enraged the Tweeter-in-Chief: 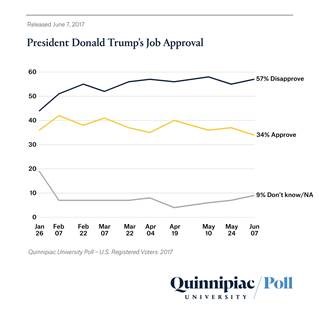 Gallup: 58% of Americans disapprove of Trump and only 36% approve – A net disapproval of 22 points, his second worst rating.

Quinnipiac: “The president is under water among every party, gender, educational, age and racial group except Republicans.”

Rasmussen: Tracking poll shows Trump at 50%+ DISAPPROVAL for all but three days since April.

Monmouth U Poll: Only 1 in 4 Americans think Trump is making progress on his pledge to “drain the swamp.”

Reuters/Ipsos: 31% of REPUBLICANS believe America is “off on the wrong track” under Trump.