‘Trump Mocks ‘Blue Ribbon’ Panels, Then Calls For One’

Trump’s new gun proposal makes it clear that he has not listened to the thousands of students across the country speaking out for common-sense gun reforms. Instead, Trump chose to side with the NRA and unveil a new proposal that does not take the meaningful steps required to ensure another tragedy like Parkland never happens again. 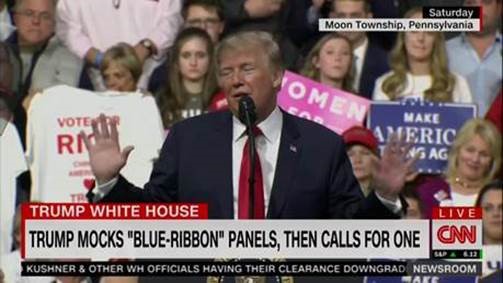 Trump’s proposal includes no new gun legislation and instead would establish a federal commission to assess how to best address gun violence in schools.

Washington Post: “Many of the student survivors have urged Washington to toughen restrictions on gun purchases, but such measures are fiercely opposed by the National Rifle Association, and the Trump plan does not include substantial changes to gun laws. Rather, the president is establishing a Federal Commission on School Safety, to be chaired by Education Secretary Betsy DeVos, that will explore possible solutions, such as the age requirement for purchases, officials said.”

The Hill: “White House officials said the administration will establish a federal commission to assess how to best address gun violence in schools, though it will not propose any legislation of its own.”

Trump tapped Betsy DeVos to run this commission, who in a 60 Minutes interview proved how truly unqualified she is.

By his own standards, Trump is not taking this issue seriously. Less than 24 hours earlier, he derided setting up “blue ribbon committees,” because all they do is “talk, talk, talk.”