Trump may be celebrating today with some vigorous putting practice (and tweeting) at his golf course in Bedminster, but the first 200 days of his presidency give him nothing to be proud of.

BBC: “Time and time again over the past six-plus months Mr Trump has undermined his agenda with ill-timed tweets or off-message comments, needlessly complicating what is already the hardest job in the nation.” 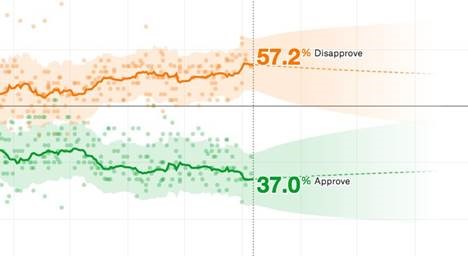 The Republican Party has had unified control of government for over half a year, and yet they’ve accomplished virtually nothing.

NBC News: “Every new president has the golden opportunity to unite his political party, especially when that party has been out of the White House for eight years. But six and a half months into Donald Trump’s time in office, the Republican Party seems as divided as it was a year ago, right before Trump’s nomination.”

Ronald Klain in the Washington Post: “Trump’s Hill allies are heading home for August without delivering on health-care reform — and worse, having to defend votes for a failed, unpopular bill. Trump has not even put forward serious plans on tax reform, infrastructure, child care, outsourcing — all ‘first 100 days’ promises, still far from filled. More voters are growing weary of the rising tide of scandals surrounding Trump.”

Trump has failed to make appointments to critical positions in government, lagging far behind his predecessors, which could put our nation’s security at risk.

CNN: “At 200-day mark, Trump nominations still lag.[…] As of August 4, when the Senate left town for its August recess, Trump has nominated 277 people for key posts, has had 124 confirmed, and has withdrawn eight of the nominations, according to CNN’s tracker. […] President Barack Obama had 433 nominations and 310 confirmations at the same point, President George W. Bush had nominated 414 and had 294 confirmed, and President Bill Clinton had 345 nominations and 252 confirmed.  Trump’s rate of 45% of nominees confirmed lags behind Obama’s 72%, Bush’s 71% and Clinton’s 73%. His nominees have also taken far longer to confirm—an average of 54 days compared with 41, 35 and 30 respectively.”