Trump’s Mass Deportations Shutting More Out of the American Dream

Trump’s extreme anti-immigration agenda is wasting valuable resources on deporting non-violent undocumented immigrants, some with decades long histories in the United States.  Here are just a few people facing deportation at the hands of the Trump administration: 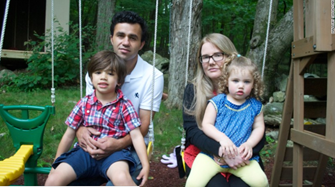 The Colindres family never thought Joel would be a target for deportation. They, along with family, friends, and their lawyer Larry Delgado, maintain his case is typical of a change in the face of those targeted for deportation.

“This is one of the most compelling cases that we have ever seen in terms of the positives versus the negatives,” Delgado said.

Delgado counts off the positives rapidly: Colindres is married to a US citizen; has two children who are citizens; pays his taxes; owns his own home and is a skilled worker who has been with the same company for 12 years. Most importantly, Delgado said, Colindres has no criminal record.  Delgado believed Colindres' case would be a “slam dunk” to at least get a stay of deportation. 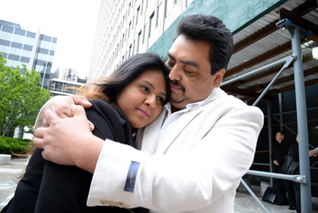 Martinez, a grandfather and father whose two adult children are U.S. citizens, was working, paying taxes and checking in regularly with immigration officials when his deportation order was suddenly accelerated last year.

The Newburgh dad applied for asylum with his wife, Julia Ochoa, who is also undocumented, in 2004, but was denied. In 2013, they were arrested and detained, and in November, Martinez was told his time is up.

“The government itself says it's dangerous,” said Ford. “And just this week a Painesville man recovering from a severe head injury was kidnapped after he was deported there (and is being held for ransom). Why would our immigration people choose that city to send anyone to, especially a mother of four to?”

ICE has not yet responded to Plain Dealer questions about the reasons for using the dangerous city as a deportation site.

Congregants and area religious leaders are holding prayers for the beloved pastor of an evangelical church near Echo Park, after he was detained by immigration authorities for evading deportation, they claim.

Pastor Noe Carias is being held at an Immigration and Customs Enforcement detention center and faces deportation after a routine check-in with an immigration officer early this week.

His wife Victoria, a U.S. citizen, is left taking care of their two young children, who are also citizens.

“Emotionally, it’s been very hard for them,” Mrs. Carias tells CBS2 News. “They cry at night. They miss their father. I miss my husband deeply.” 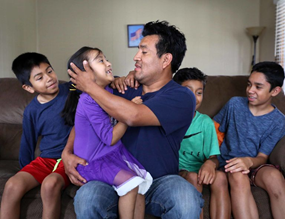 “Things are different now,” he said. “I'm sad, but I have to be strong for my family. My wife is frightened because without me she won't be able to make the house payments on her job alone.”

“He said he can see his whole life — the life he's wanted and worked so hard for — and it's right there in front of him,” Tramonte said. “He was so close. Now they (ICE) are killing his dreams and he does not know what he can do.”

“And he wants to know why.” she said.

A Westchester high school student was detained by federal immigration police on the day of his senior prom, and a day after his mother was taken into custody for deportation, according to officials and family. Diego Ismael Puma Macancela, a 19-year-old Ecuadorean national is a senior at Ossining High School. He arrived in the U.S. with his mother in 2014. They fled their native country because of gang violence.

The Boston Globe published a letter from Francisco Rodriguez, who had written it from a jail in Suffolk County, Massachusetts, where he has been held for the past week. Rodriguez, who is forty-three, has lived in this country for a decade. For the past five years, he has worked as a custodian at the Massachusetts Institute of Technology, where he belongs to a labor union. He pays taxes and runs a carpet-cleaning business on the side. He is married, with two children, and his wife is pregnant with a third. Prior to his current incarceration, he wrote, he had never been arrested for any crime.

Rodriguez is from El Salvador, where he worked at an engineering firm, but he left the country in 2006, fearing for his life, after gangsters murdered one of his colleagues…Each year since, however, officials at the Department of Homeland Security have granted him a stay against removal, after he has met with them to insure that he has remained a resident in good standing. This spring, however, following the election of Donald Trump, ICE agents, who are part of D.H.S., sent a different message: Rodriguez needed to buy himself a ticket to El Salvador and volunteer to surrender for deportation. An invitation that had been a routine check-in in previous years suddenly became an order to leave the country. 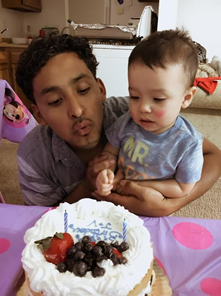 Valle-Rodriguez fled from El Salvador when he was 17-years-old. A judge ordered him deported in 2005 after he missed an immigration hearing. But Thomson says the 31-year-old never got a notice for the hearing because of a clerical error.

On May 24th, Immigration and Customs Enforcement agents detained Valle-Rodriguez in a parking lot, while he was out running errands with his wife and their two-year-old son. 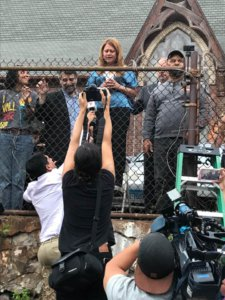 Nury Chavarria speaking to supporters outside the church (Liberation News)

Nury Chavarria sought sanctuary in the church on July 20 instead of boarding a flight to Guatemala as she had been instructed to by ICE. Chavarria has been living in the United States for 24 years, longer than she had lived in Guatemala. She is a single mother of four children. Her youngest daughter Hayley is 9-years old and staying with her at the church. In a press conference the night they arrived at the church, Hayley Chavarria appealed directly to President Donald Trump to keep her mother in the country: “My mother, Nury Chavarria, is someone I love more than anyone in the world. She’s not a criminal, she has a positive attitude about everything. I want her to stay because I love her so much.”