In case you missed it, over the weekend, DNC Chair Jaime Harrison joined Tiffany Cross on MSNBC’s Cross Connection and Al Sharpton’s PoliticsNation to discuss voter enthusiasm, the DNC’s historic investments, and what’s at stake in the midterm elections. 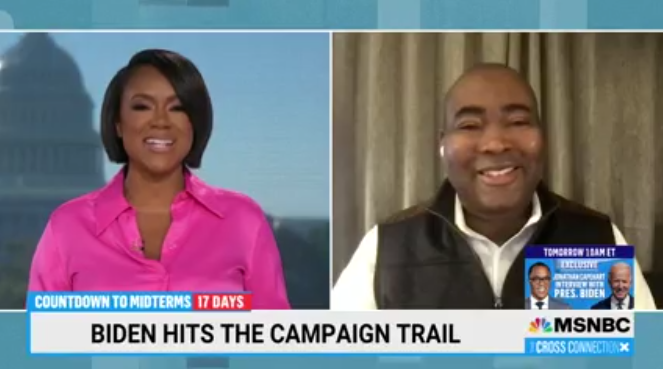 Harrison: “Republicans don’t have any plans other than to ban abortion nationwide, to wreck Social Security and Medicare for future generations, to make sure they get more tax cuts to the rich but Democrats are trying to actually solve problems for people right now. And that’s why Joe Biden and Democrats in the House and Senate have actually delivered for a lot of the American people. From the American Rescue Plan to the Inflation Reduction Act, to gun safety for the first time in 30 years, we have really been fighting to do better for the American people while the Republicans are just the party of no. […] The DNC has put over 70 million dollars on the ground to make sure that we have our neighbors and our friends knocking on our doors to say, this is what Democrats have accomplished.” Harrison: “There’s a lot of energy on the ground right now and so a lot of people are saying, ‘You can bet against us if you want, but we know that Democrats are fighting for us and delivering for us while Republicans are trying to take us back.’ Trying to take us back on abortion, trying to take us back in terms of the economy, destroying Social Security and Medicare. And that’s rallying the troops and getting people fired up. And that’s why you see the record turnout you see in places like Georgia. I was just in Georgia on Friday and I can tell you the people that I met are fired up and ready to go.”