WATCH: Durbin to Kavanaugh: ‘Trump Decided You Are His Man’

Senator Durbin spelled it out for Americans today — President Trump, who faces mounting legal trouble, has decided that Brett Kavanaugh is his man. Why? Because Kavanaugh thinks the president is above the law. 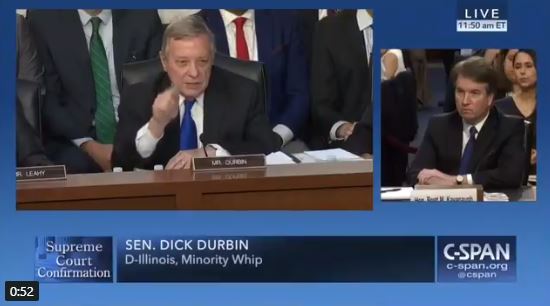 Senator Durbin: “You are the nominee of President Donald John Trump. This is a president who has shown us consistently that he is contemptuous of the rule of law. He has said and done things as president which we’ve never seen before in our history. … It’s that president who has decided you are his man. You’re the person he wants on the Supreme Court.”

Kavanaugh believes the president is above the law. See for yourself:

Kavanaugh refused to say that the president must comply with a subpoena or provide records in an investigation.

CNN: “Indeed, if confirmed to the Supreme Court, Kavanaugh's views could carry major consequences — particularly as Trump's legal team has warned it would fight a potential special counsel subpoena calling for the President's testimony. Senators tell CNN Kavanaugh has not specified his views on a presidential subpoena.”

Kavanaugh said that sitting presidents should not be subject to lawsuits, criminal investigations, or questions from a prosecutor or defense lawyer.

Washington Post: “U.S. Circuit Judge Brett M. Kavanaugh, a former clerk for Supreme Court Justice Anthony M. Kennedy who was nominated replace him, has argued that presidents should not be distracted by civil lawsuits, criminal investigations or even questions from a prosecutor or defense attorney while in office.”

William Araiza, Brooklyn Law School professor: “It does seem as though, when he was on the DC Circuit he had an affection for presidential power. Let’s put it that way.”

Los Angeles Times: “But Kavanaugh has taken the view of presidential immunity a step further than most.”

Kavanaugh thinks the president should be able to fire special counsels.

Associated Press: “In a 1998 article in the Georgetown Law Journal, Kavanaugh wrote that Congress should give the president the ability to fire special counsels, an opinion that Democrats have highlighted in the hours since he was nominated Monday evening.”

Kavanaugh has said that presidents should be free of legal investigations until after they leave office.

Washington Post: “If a president were truly malevolent, Kavanaugh wrote, he could always be impeached. Kavanaugh’s position that presidents should be free of such legal inquiries until after they leave office puts him on the record regarding a topic of intense interest to Trump — and could be a central focus of his confirmation hearing to succeed Kennedy, legal experts said.”

Kavanaugh has said that the president can ignore laws he thinks are unconstitutional.

CNN: “Supreme Court nominee Brett Kavanaugh in 2013 asserted that it's a ‘traditional exercise’ of presidential power to ignore laws the White House views as unconstitutional, as he defended the controversial practice of signing statements prevalent in George W. Bush's White House.”

Associated Press: “Supreme Court nominee Brett Kavanaugh suggested several years ago that the unanimous high court ruling in 1974 that forced President Richard Nixon to turn over the Watergate tapes, leading to the end of his presidency, may have been wrongly decided.”