WATCH: Feinstein Gets Personal On Life Before Roe v. Wade

At today’s hearing, Senator Feinstein got personal on life before Roe v. Wade, describing her experience of sentencing women who had abortions to state prisons. 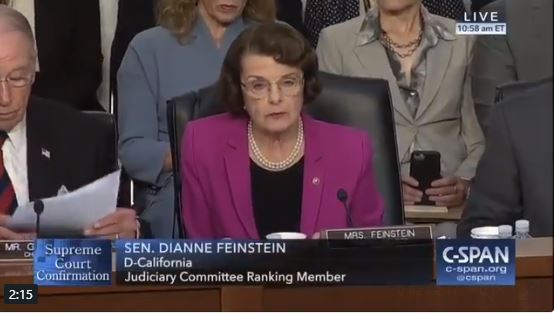 Senator Feinstein: “I was in the 50s and 60s active, but first as a student at Stanford. I saw what happened to young women who became pregnant. And then subsequently, I sat as an appointee of Governor Brown's on the term-setting and parolling authority for women in California who had committed felonies. And so I sentenced women who had committed abortions to state prison and granted them paroles. And so came to see both sides. The terrible side, and the human and vulnerable side.”

Feinstein concluded, “The president that nominated you has said, ‘I will nominate someone who is anti-choice…’ We believe what he said. We cannot find the documents that absolve from that conclusion.”

“If we put another two or perhaps three justice on, that's really what's going to be — that will happen.”– Trump, on whether the court would overturn Roe v. Wade, 2016

“It is. It is.” – Trump, on whether overturning Roe v. Wade would be a litmus test for Supreme Court nominees, 2015

“If we appoint strict constructionists to the Supreme Court as Donald Trump intends to do, I believe we’ll see Roe vs. Wade consigned to the ash heap of history.” – Pence, 2016