Senator Klobuchar laid out the high stakes of Kavanaugh’s nomination. If confirmed, he would threaten the health care of Americans. 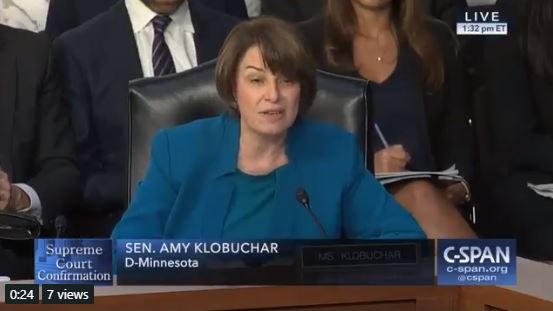 Senator Klobuchar: “At a time when the administration is arguing that protections to ensure people with pre-existing conditions can't be kicked off their health insurance are unconstitutional, we cannot and should not confirm a justice who believes the president’s views alone carry the day.”

Kavanaugh previously wrote that a future president could refuse to enforce the ACA and he dissented from a ruling to protect women’s access to birth control.

New Yorker: “Late last year, a three-judge panel of the D.C. Circuit voted, two to one, to uphold President Obama’s health-care reform, known as the Affordable Care Act (ACA). Kavanaugh dissented, primarily on the ground that the lawsuit was premature. In a sixty-five-page opinion, Kavanaugh appeared to offer some advice to the Republicans who are challenging Obama in the election this year. ‘Under the Constitution,’ Kavanaugh wrote, ‘the President may decline to enforce a statute that regulates private individuals when the President deems the statute unconstitutional, even if a court has held or would hold the statute constitutional.’”

NBC News: “In a 2015 case, Priests for Life v. HHS, the District of Columbia Circuit Court of Appeals refused to allow a rehearing for a religious group’s challenge to an Obamacare requirement that employers provide birth control to employees. Kavanaugh dissented from that decision. He argued that religious organizations should not be forced to provide contraception, falling in line with conservative thought on the issue.”