WATCH: Leahy: ‘How Far We Have Fallen’

Senator Leahy — who has served in the Senate for 44 years, a span that has included 19 Supreme Court nominations — highlighted the unprecedented secrecy from Senate Republicans in trying to rush through Kavanaugh’s nomination. 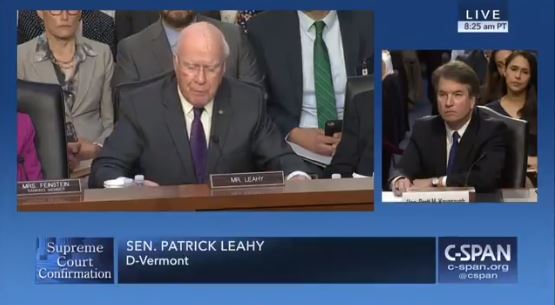 Senator Leahy: “The Judiciary Committee's Supreme Court hearings are meant to be an unsparing examination of a nominee to a lifetime appointment to our highest court. They are intended to give the American people all, all, all the American people, a genuine opportunity to scrutinize the nominee's judicial philosophy, beliefs and character.

“Because if confirmed, with the stroke of a pen, a nominee may impact their lives for a generation or more. And how far we’ve fallen. … You should be sitting in front of us only after we’ve completed a review of your record. Your vetting is less than 10% complete. In critical ways, our committee is abandoning its tradition of exhaustively vetting Supreme Court nominees.”