WATCH: Trump Lied To Americans About Progress On Denuclearization

In the time since Trump’s first summit with Kim Jong Un, he has continuously lied to Americans about the progress of denuclearization, while the rogue regime continues to develop, expand, and conceal its nuclear capabilities.

In order for Trump’s second summit to be successful, Trump must not be duped again, and he has to demonstrate tangible, verifiable progress. 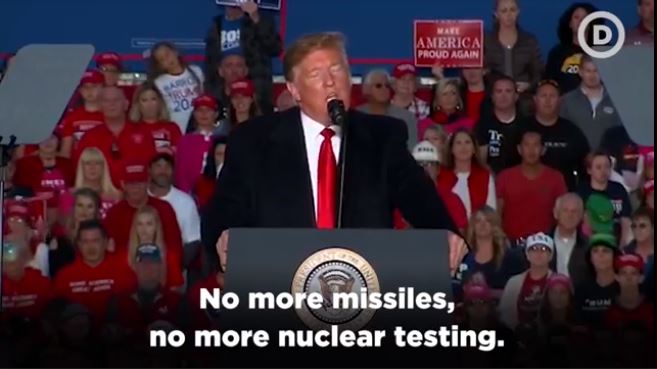 Trump: “We have the start of an amazing deal. We’re going to denuke North Korea. It’s going to start immediately.”

Reporter: “In a series of tweets today, President Trump claimed, ‘there is no longer a nuclear threat from North Korea.’”

Trump: “I think a lot of progress is being made.”

Richard Haass: “The president can say we’ve accomplished denuclearization, but the last I checked, not only has North Korea not moved in that direction, but it’s actually moved farther away from it.”

Trump: “Yeah, maybe they are. Maybe they’re not. I don’t believe that.”

Kasie Hunt: “The reality is that there haven’t been any concrete deliverables in the wake of that first summit.”

Max Boot: “Since Singapore, North Korea has actually been expanding their nuclear and missile programs. so the threat from North Korea continues to grow.”

Trump: “I’m going to Vietnam, to Hanoi…Hopefully we do as well with the second summit as we did with the first.”