WATCH: When Trump Says He Wants ‘Corruption Investigations’ … He Means Help With His Next Election

Republicans’ worst excuse for Trump’s gross abuse of power is that Trump all of a sudden, shockingly, become passionate about rooting out corruption in other countries.

TRUMP: “We have an obligation to investigate corruption. And that’s what it was.”

Republicans in Congress are really grateful for Trump’s activism on the issue of corruption. For example, Alabama Congressman Mo Brooks recently expressed his gratitude.

BROOKS: “I’m thankful the president is trying to ferret out corruption wherever it may exist.”

But just now, Ambassador Taylor testified that he “had come to understand” — well before the July 25 phone call between Trump and Zelensky — that when Trump says he wants “investigations,” Trump means he wants help with his next election. 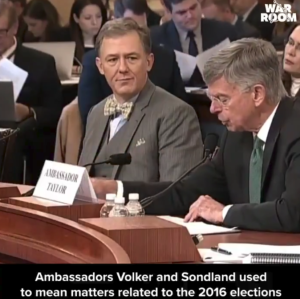 Taylor: “I came to understand … ‘investigations’ was a term [Ambassadors Volker and Sondland] used to mean matters related to … investigations of Burisma and the Bidens.”