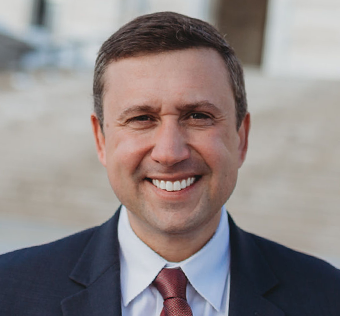 Ken Martin is currently chairman of the Minnesota Democratic-Farmer-Labor (DFL) Party, President of the Association of State Democratic Committees, and a vice chair of the Democratic National Committee.

Martin was born in Minneapolis, Minnesota on July 17, 1973. He attended Eden Prairie High School and graduated from the University of Kansas in 1996 with two Bachelor of Arts Degrees in Political Science and History. Martin’s deep involvement in student government and campus life led to Chancellor Robert Hemenway presenting him with the Donald K. Alderson Memorial Award, which recognizes a graduating senior whose campus involvement as a student benefits fellow students and the greater good.

Ken started his political work in 1990 as an intern for Minnesota U.S. Senator Paul Wellstone’s campaign and later interned in his official office. In 1992, Martin organized college campuses throughout the South for the Clinton/Gore campaign. After college, he worked in Kansas politics, helping with the Kansas Democratic Coordinated Campaign as Field Director for the Kansas Democratic Party.

From 2001 to 2005, Martin served as the policy aide for Ramsey County Commissioner Susan Haigh. In 2005, he served as the executive assistant to Minnesota Attorney General Mike Hatch and then went on to help run his campaign for governor in 2006.

Working with the North Central States Regional Council of Carpenters, Martin led an effort on behalf of the Building Trades to pass prevailing wage ordinances with local governments throughout Minnesota.

In 2008, Martin led the campaign that successfully passed the Clean Water, Land and Legacy Amendment (Legacy Amendment) to the Minnesota Constitution, which to this day is still one of the largest conservation finance measures to pass in our nation’s history, as well as one of the highest vote getters on a Minnesota ballot.

Following the successful 2010 campaign, Governor Mark Dayton asked Martin to serve as the chairman of the Minnesota Democratic-Farmer-Labor Party, where he was elected unanimously in February 2011. In 2017, Martin was elected by his peers throughout the nation as president of the Association of State Democratic Committees and became a vice chair of the Democratic National Committee.

Chairman Martin is currently serving his fifth term as chairman of the Democratic-Farmer-Labor Party (DFL), the Minnesota branch of the Democratic Party. He has held this post since 2011—making him the longest-serving chairman in the 75-year history of the DFL.

When Martin was elected DFL Party Chair in 2011, he Inherited a state party deeply in debt following significant election losses, including losing the majority in the state Senate for the first time in 40 years, the majority in the House of Representatives, and one of the longest held Democratic seats in Congress in MN-08 with the defeat of Congressman Jim Oberstar.

Martin was able to quickly raise significant resources to rebuild the party and began making the DFL Party the driving force for political strategy on behalf of its stakeholders – activists and party leaders, candidates and elected officials, and progressive organizations and community partners.

This coalition of campaign efforts and partners enabled progressive movements to align strategy and increase efficiency, and positioned the party for big wins in 2012, including taking back majorities in both the state House and state Senate, becoming the first state in the nation to defeat a constitutional amendment to ban same-sex marriage, beating back a voter ID amendment, reclaiming the MN-08 congressional seat with the election of Congressman Rick Nolan, and keeping Minnesota in the blue column for President Obama.

The 2014 cycle brought additional success as the Minnesota DFL under Martin’s leadership.

During the 2016 elections, Minnesota was one of only two Midwestern states to vote for the Democratic presidential nominee. In addition, despite significant losses of rural congressional seats throughout the country, the Minnesota DFL was able to win all three of its rural congressional races by reelecting Congressman Tim Walz (MN-01), Congressman Collin Petersen (MN-07), and Congressman Rick Nolan (MN-08).

In 2018, the DFL had the most successful year at the ballot box in party history. The Minnesota DFL elected Tim Walz as governor, marking the first time the DFL has had three consecutive terms in the governor’s office. In addition, the DFL won every constitutional office; decisively won back the majority in the state House of Representatives; flipped two congressional seats from red to blue, one of those seats being represented by Republicans for over forty years; and elected two women to the U.S. Senate, Senator Amy Klobuchar and Senator Tina Smith, becoming only the sixth state in the union to be represented by two women in the U.S. Senate simultaneously.

During Martin’s tenure, the DFL made a priority of bringing in more voices and pathways to leadership, resulting in the most diverse staff, leadership, and party officers in DFL history.
In addition, the Minnesota DFL is home to the first Muslim Attorney General, Keith Ellison; the first lesbian mom to serve in Congress, Angie Craig; the first refugee to serve in Congress, Ilhan Omar; and to the highest ranking Native American woman to ever serve in an Executive Office, Lt. Governor Peggy Flanagan.

The Minnesota DFL is regarded as one of the strongest state parties in the nation by those in Democratic politics throughout the country. With Martin as chairman, the DFL has not only raised more dollars every year than the previous, but also reached more voters each election cycle. Under Martin’s leadership, the DFL has never lost a statewide election.

In 2017, Martin was elected by his peers throughout the country as the president of the Association of State Democratic Committees (ASDC), and by virtue of that election became a vice chair of the Democratic National Committee (DNC).

As vice chair, Martin has focused on building up state parties nationwide. Early on, he focused on working with stakeholders to put a plan together to replicate Howard Dean’s 50 state strategy. Coming on the heels of a 2016 election, the strategy looked at how to build state parties from the ground up.

The result was a plan to create a historic partnership between states and the national party that focused on increased resources for the 57 state parties, enhanced training and curricula for state party leaders, and a new commitment to building better digital tools and data.

The plan that Martin put together and negotiated with DNC Chair Tom Perez resulted in investments in state parties, which played a significant role in Democrats’ strong 2018 showing. State parties had the capacity to build the infrastructure to help candidates up and down the ballot, and were uniquely situated to coordinate among campaigns.

Martin lives in Eagan, Minnesota with his wife Jennifer O’Rourke and two sons, Samuel and James. He is active in youth sports in Eagan, where he has served on the Eagan Athletic Association Board of Directors and as the president of the Eagan Basketball Association.