WHAT WE'RE DOING AND WHY IT MATTERS: DNC COUNTER DISINFORMATION PROGRAM

The White House has yet to provide an appropriate response to foreign election interference and has even shown an increasing willingness to actively employ disinformation for political gain. And now, in order to defend the president, Republicans have turned to echoing false conspiracy theories pushed by Russian intelligence. For these reasons, we expect the scale of malicious activity and disinformation operations only to increase as we move closer to the 2020 election.

The DNC has established a counter-disinformation unit within the DNC Technology team that serves as a knowledge base and intelligence unit aiding campaigns, state parties and party committees to combat online disinformation and social media manipulation. The team, led by our Chief Security Officer, Bob Lord, is engaging civil society, law enforcement, and social media platforms to identify, monitor, and disrupt these efforts. We are building and purchasing tools and devoting human resources to monitoring social media platforms, educating the Democratic ecosystem on the issue, working with campaigns to counter these tactics, and providing recommendations to interested parties on what they can do to help.

On the detection front, we’ve adopted a hybrid approach – purchasing commercial tools where available and building our own tools where we see a gap in the market. Existing commercial tools we’ve acquired allow us to detect trending content on social media and respond in real-time. We’re also building a custom in-house tool, expanding on a tool the DCCC successfully used last cycle, to provide us with a detailed view of social media traffic and alert us to platform manipulation related to our candidates. The team has already successfully used the tools we’ve acquired and human intelligence to provoke takedowns or demotions on platforms controlled by all three major social media companies –including thousands of misleading or inauthentic posts like the ones below: 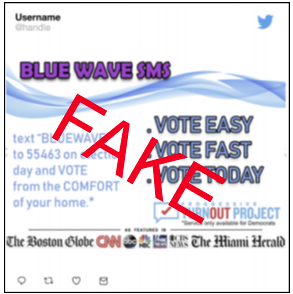 To prepare the Democratic ecosystem for the coming onslaught, we are conducting counter disinformation training and webinars and recommending counter disinformation tools to campaigns, state parties, and our sister committees. We offer general security training, counter-human intelligence training, and training on disinformation. We’ve also launched the DNC War Room to make sure we’re correcting the record online and holding the Trump White House accountable, and we’ve deployed organizers to battleground states earlier than ever to speak directly with voters.

Despite the hard work we’re doing at the DNC, this is a whole-of-society problem and we need many others to play their part. We have compiled a set of recommendations for various stakeholders. Please visit https://democrats.org/disinfo for more information.