The Women’s Leadership Forum (WLF) serves as the Democratic Party’s centralized hub for activation, information, and fundraising for Democratic women and their allies.

The WLF recruits and engages women in Democratic politics. Today, we’re proud to see that women are more engaged in the political sphere than ever. They’re getting involved on the ground level as organizers and fundraisers, and they’re running for office in record numbers. But research shows that women are historically less likely than men to run for public office or participate in political fundraising, and the WLF is committed to eliminating the gender disparity in politics by encouraging women to join our ranks and support the Democratic Party. The WLF ensures that women’s voices and values continue to be represented by our party leadership, because we are the party that fights for women.

Through your support of the WLF, we will be able to recruit more Democratic women to run for office. The WLF works to close the gender gap by raising funds for the DNC, which, in turn, engages women activists at the grassroots level.

The WLF works to close the fundraising gender gap by focusing its fundraising efforts on women. Historically, men have dominated the fundraising ranks and outnumbered women bundlers. Female candidates also traditionally raised less than their male counterparts. But the tide is turning due to strong women who have added their names to ballots across the country and the help of organizations like the WLF.

In 1993, Hillary Clinton, Tipper Gore, and 36 women gathered to discuss ways to give women a greater voice in the national party. The outcome was a new DNC finance council called the Women’s Leadership Forum. Its mission is to ensure that women have a seat at the table and remain an integral part of the Democratic National Committee. Since its formation, the WLF has established a strong record of outreach and fundraising for the Democratic Party.

In 1994, Tipper Gore was named the first WLF Honorary Chair. In the year leading up to the 1996 election, First Lady Hillary Clinton and Tipper Gore hosted dozens of WLF events across the country.

What started out primarily as a finance council for women to elevate their voices by raising funds, now exists as a way to amplify women’s voices within the party. Today, our Women’s Leadership Forum is run by our dynamic Steering Committee: Cynthia Friedman, Virginia McGregor, Regina Montoya, Carol Pensky, Diane Robertson and Ursula Terrasi.

The mission of the Women’s Leadership Forum is to raise women’s voices and influence within the Democratic Party by serving as the centralized hub for activation, information, and significant fundraising for Democratic women and their allies. Specifically, the WLF creates an active network of women who work closely with state and local parties to elect Democrats by:

Every year, the WLF hosts an annual training and issues conference in Washington D.C. to showcase the rising stars and trailblazing women in the Democratic Party. It is an inspiring and uplifting two days of trainings, speakers, and panels.

See some highlights from our 2019 WLF National Issues Conference below: 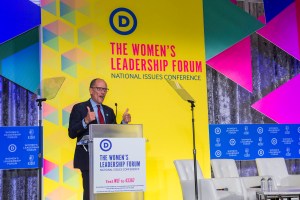 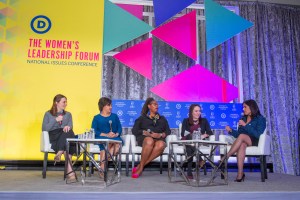