AS DEMOCRATS CELEBRATE 10 YEARS OF THE AFFORDABLE CARE ACT, TRUMP’S HEALTH CARE AGENDA JEOPARDIZES COVERAGE & SPIKES COSTS — EVEN IN THE MIDST OF A PANDEMIC. On the 10 year anniversary of the Affordable Care Act being signed into law, DNC Chair Tom Perez, health care advocates, and Democrats from across the battlegrounds slammed Trump for his broken health care promises —  backing a lawsuit to eliminate protections for people with preexisting conditions, spiking costs, and proposing major cuts to Medicare and Medicaid

The DNC also launched a diverse media print and radio advertising campaign in six battleground states highlighting the contrast between Trump and Democrats on the issue of health care; held a press call with Chair Perez, Democratic state party chairs from Michigan and Arizona and a health care advocate from North Carolina; and the DNC’s War Room released this memo detailing Trump’s disastrous health care record.

CBS News: “Democratic Party chair Tom Perez told reporters on Wednesday that he expects health care to be ‘a defining issue of this election.’ Perez continued that ‘the chronic incompetence of this president on health care and so many issues runs far and deep. And the American people will remember. They remembered it in 2017, 2018 and 2019. When health care was on the ballot, Democrats won in scale.’ According to CBS News Battleground Tracker polls, health care has been the top issue of importance to likely Democratic voters in early contest states since the launch of the CBS News survey in June 2019.”

Florida Politics: “Florida Democrats commemorated the 10th anniversary of the Affordable Care Act Monday amid the state topping more than 1,100 cases of the novel coronavirus, known as COVID-19… They blasted Trump for continuing to support the lawsuit to eliminate the ACA during his press conference Sunday.”

Bay News 9:  “Shalala said she has been worried about the lack of leadership from President Trump in handling the crisis, and now says she worries equally about Gov. DeSantis. ‘Both of them are failing the test of leadership,’ she said.”

The Floridian: “House Democrats are celebrating the 10th anniversary of the Affordable Care Act and outlining how 1000’s of Americans have benefitted from the controversial healthcare law that President Barack Obama signed into law back in 2011. At the same time, these very same proponents of the law are railing against congressional Republicans and President Donald Trump for continued efforts to ‘repeal and replace’ the healthcare law commonly known as ‘Obamacare.’”

PoliticsPA: DNC Campaign Targets African American and Latino Voters in PA. “On Monday, which was the 10th anniversary of the Affordable Care Act, the Democratic National Committee launched a ‘diverse media advertising’ campaign aimed at attacking the Republican Party’s message on healthcare in six battleground states that President Donald Trump won in 2016, including Pennsylvania.

“‘Victory in 2020 will be won in Black and Brown communities throughout the country, and we cannot afford to take a single vote for granted,’ said DNC Chair Tom Perez. ‘President Obama, Speaker Pelosi, and Democrats in Congress made access to health care a reality for millions of people, especially in communities of color, and Trump’s agenda has trampled on that progress. In a time where America is facing a pandemic, it is important for voters to remember who has their back when it comes to protecting and expanding access to health care.’”

WisBusiness: “AG Josh Kaul called for dropping the ongoing lawsuit on the Affordable Care Act during a WisDems press call celebrating the ACA’s 10th anniversary. Kaul said the coronavirus crisis shows how critical the protections of the ACA are to the American people. ‘Americans have been asked to take extraordinary steps to help us fight the spread of coronavirus and we need our federal government to take extraordinary steps as well and one way that it can support the American people as we fight this virus is by standing up for health security and dropping the attacks on the Affordable Care Act,’ he said.’”

Wisconsin Examiner: “On the 10th anniversary of the signing of the Affordable Care Act — and in the shadow of the worsening COVID-19 pandemic — activists held a series of telephone press briefings on Monday to criticize Republicans in Congress and the Trump administration for seeking to undermine the landmark health care legislation… ‘That suit needs to be ended,’ said Wisconsin Attorney General Josh Kaul during a media call sponsored by the Democratic Party of Wisconsin.”

The Delaware Gazette: Ohio Chair David Pepper: Affordable Care Act turns 10 amid pandemic. “The coronavirus pandemic is revealing weak spots in our health care system and social safety net, and now Donald Trump is doubling down on his attempt to destroy one of the things that has helped most — the Affordable Care Act.”

Ohio Democratic Party: As Coronavirus Pandemic Explodes, Trump Doubles Down on Destroying the Affordable Care Act. “Doctors and nurses are working overtime, often without protective gear, to care for those stricken. The uninsured are balking at getting tested because of costs.

“The coronavirus pandemic is revealing major weaknesses in our health care system and social safety net, and now Donald Trump is doubling down on his attempt to destroy one of the things that has helped most — the Affordable Care Act.”

FOX7: “The Texas Democratic Party held a press conference commemorating the 10th anniversary of signing the Affordable Care Act. State leaders discussed the status of healthcare in the midst of COVID-19. ‘There’s no doubt there’s so many people in Texas for whom the Affordable Care Act has been a literal lifesaver,’ U.S. Rep. Lloyd Doggett said.”

Las Vegas Sun: Rep. Dina Titus: Now is the time to strengthen and fight for the Affordable Care Act. “Now more than ever, Nevadans are relying on the access to quality, affordable health care provided by the Affordable Care Act. The Trump administration’s obsession with sabotaging this landmark achievement — particularly as our nation grapples with the deadly coronavirus outbreak — is irresponsible and cruel […] The Affordable Care Act has drastically improved the U.S. health care system over the past 10 years. At this critical time for so many patients, Trump should stop trying to destroy it.”

Blue Virginia: “‘Every day, the Trump administration’s attacks on the ACA put Virginians at risk. Virginians are fed up with Trump’s attacks on their health care and they elected Democrats to fight back. So we got to work and made affordable health care a priority in this year’s legislative session. The result? Lower costs, better health insurance plans, and a big step towards a world where nobody goes bankrupt for going to the doctor,’ said Democratic Party of Virginia Press Secretary Carson Brown.”

Colorado Times Recorder: “As the COVID-19 epidemic worsens, Laura Packard, a Colorado health care activist and cancer survivor, joined Speaker of the U.S. House Nancy Pelosi (D-CA) and others on a press call this morning in honor of the ten-year anniversary of Obamacare being signed into law by President Barack Obama.

“The speakers discussed the importance of the Affordable Care Act in responding to the coronavirus pandemic, and the threats that the ACA faces from President Donald Trump and Republicans in Congress, as the Supreme Court gears up to hear a case that could possibly rule Obamacare unconstitutional.”

KRWG: Democratic Party of New Mexico Statement: “While Donald Trump continues to use the presidency to attack our health care, Democrats are fighting every day to expand on the success of the ACA. We’re proud to see how our Democratic leaders at the state and federal level have passed legislation to lower the cost of prescription drugs, expand health care coverage, and reduce premiums. That is the kind of leadership that we need in the White House, and that’s why we’re ready to elect a Democratic president in 2020.”

MUST READS ON HEALTH-CARE FROM THE WEEK OUT OF FL & WI:

Florida Democratic Party Chair Terrie Rizzo penned an op-ed calling out Trump’s failed policies on health care and how they’ve made the situation Floridians are in during this pandemic worse.

First time Wisconsin voter Kyleigh Forrester penned an op-ed for the Cap Times, explaining why in her first election she’ll be casting a ballot against Donald Trump.

Kyleigh Forrester: In my first election, I’ll vote for the candidate who will protect my health care.

WAPO: ARIZONA IS A “LOOSE BRICK IN REPUBLICANS’ RED WALL.” Trump and Republicans face increasing headwinds in Arizona. The Washington Post presents multiple proof points, taking into account historic victories by Democrats in 2018 across the state. Take a look: 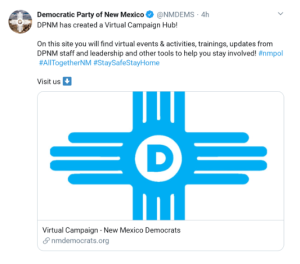 IN TEXAS: Dallas Morning News: “The Texas Democratic Party on Monday will shift its political organizing program into an online resource for Texans looking for information about the novel coronavirus outbreak in the state… ‘Whether we are campaigning during the time of coronavirus or not, the first and foremost thing we’re doing is building relationships, and that’s what we’re doing with this program,’ [Texas Democratic Party Organizing Director Olivia Stitilis] said. ‘All of these things can be adjusted and moved. We’re definitely not taking our foot off the gas or eyes off the prize.’”

IN NEW HAMPSHIRE: WMUR: “The state Democratic Party next week will begin an effort for online activism. ‘Tuesday Trainings’ will help activists ‘stay involved while you’re staying home,’ according to a party email. The first training will be called ‘Sharpening Your Grassroots Communications Tools’ and will focus on ‘writing great letters to the editor’ and ‘using social media effectively.’ The party is also encouraging people to register to vote, volunteer for a phone bank and – of course – use social media.”