DNC CHAIR PEREZ: “DONALD TRUMP IS SCARED TO DEATH OF JOE BIDEN” & DNC BUILDING “BEST INFRASTRUCTURE WE HAVE EVER GIVEN TO A NOMINEE.” As the general election begins, DNC Chair Tom Perez highlighted the strength of Joe Biden’s candidacy, his broad appeal to voters across the country, and how Democrats’ have built the most expansive campaign infrastructure for our nominee in modern history to support his campaign and Democratic candidates at every level.

READ OUR GENERAL ELECTION MEMO: DNC PROGRAMS TO SUPPORT BIDEN CAMPAIGN AND DEMOCRATS ACROSS THE COUNTRY.

AND COMING TO A SCREEN NEAR YOU:

The reservation across 14 battleground states (AZ, CO, FL, GA, MI, MN, ME, NC, NH, NV,  OH, PA, VA, WI) will help support get-out-the-vote efforts for the Biden Campaign and Democrats running at every level of the ballot. More from The New York Times:

“The expenditure is the largest any Democratic organization has spent on general election advertising so far, and far more than the party reserved at a comparable point in 2016…’By making these kinds of historic, early investments in our online-battleground infrastructure, the D.N.C. is putting our eventual nominee and Democrats running at every level of the ballot in the strongest possible position to secure victory in November,’ said Tom Perez, the Democratic Party chairman.”

(CO): Colorado Politics: “Denver Mayor Michael Hancock said President Trump has failed a test of basic leadership in the wake of the pandemic, as cities and states struggle to find the equipment they need to respond. […] ‘I think this is where you see who’s fit and who isn’t,’ Hancock said. ‘The federal government has completely failed our nation in preparing and making sure we have everything.’”

(FL): News Service of Florida: “Several leading Florida Democrats called for President Donald Trump to reopen the federal health-insurance exchange and to put the brakes on a lawsuit that could repeal the federal Affordable Care Act, often dubbed Obamacare. ‘We all know thousands of Floridians who have lost their jobs in the last few weeks due to this crisis, many of whom either lost their employment-sponsored health insurance or their ability to pay for their own plan,’ Florida Democratic Party Chairwoman Terrie Rizzo said.”

(MI) : Michigan Advance: “Carter said he believes that he was infected with COVID-19 virus during a retirement party for a law enforcement official on March 6. He pointed out that at that time, President Donald Trump was publicly downplaying the severity of the virus spread…. “They also were critical of the Trump administration’s delay in reacting to the virus spread through insufficient movement of health care supplies to states, something also raised by Gov. Gretchen Whitmer and a bipartisan group of governors.”

(WI): The Cap Times: “On a press call Thursday, U.S. Rep. Gwen Moore said COVID-19 is ‘very opportunist.’ ‘If you’re weak, and if you’re poor, and if you can’t afford to have your groceries delivered to you, if you can’t stock up for a month’s time and avoid the interactions, if you work in the public service sector, I think you’re at greater risk,’ the Milwaukee Democrat said. ‘Those things seem to come together for African Americans.’”

York Dispatch: “As he leads the belated, disorganized and still far from effective charge against the coronavirus pandemic, Donald Trump fancies himself a wartime president. Trouble is, he keeps targeting the wrong enemies. While the viral scourge continues to sweep the nation, where it has sickened more than 300,000 and killed 8,400 — including some 10,000 cases and 135 fatalities in Pennsylvania — the president sets his sights not on the disease but on facts, critics and journalists…”

Philadelphia Tribune: “The coronavirus pandemic has shown the nation once again why President Donald Trump is unfit to be commander-in-chief… Trump has spent much of his presidency speaking only to his conservative base and continues to do so even in the midst of a pandemic that threatens the lives of all Americans regardless of their political affiliation.”

Philadelphia Inquirer: “Individuals, businesses, governments, and institutions have been reeling for over a month trying to respond to the many ways the coronavirus has dismantled society. While some of those responses have been drastic, some have not been drastic enough.With rising death rates and a shameful scarcity of facemasks, ventilators, test kits, and other basic supplies, it’s stunning how slow President Donald Trump has been to use the Defense Production Act that could force production of the items necessary.”

Concord Monitor: “The president’s handling of the COVID-19 pandemic is what he will be remembered for. It will be his legacy. Nothing else he does will matter. The president is not acting. He is reacting to a serious health issue that affects all Americans. He claimed that our country would be open for business by Easter. Maybe he meant next Easter. The November election will be a definitive one. Politicians will do their best to convince the electorate that they have all the answers to America’s problems. The best the typical citizen can do is to separate the wheat from the chaff and hope that things turn out well.”

DEMOCRATS CONTINUE RAMPING UP DIGITAL ORGANIZING, WILL TEXT 1 MILLION GEORGIA VOTERS ENCOURAGING VOTE BY MAIL. The DNC is continuing to ramp up our digital organizing programs so we can keep reaching voters online — and this week we announced a new partnership with the Democratic Party of Georgia to text over 1 million voters, encouraging voting by mail.  Some coverage of the announcement below:

NEVADA DEMOCRATS ALSO RAMPING UP ONLINE, MORE FROM THE RENO GAZETTE JOURNAL. “[Nevada Democratic Party] Spokeswoman Molly Forgey said the party has more than 30 staffers working to build on momentum generated during February’s closely watched presidential caucus, which helped swell the ranks of Democratic volunteers and voters in Nevada..“She said the party is offering online training sessions for candidates and working to reorganize some 3,000 volunteers initially recruited for Caucus Day. Democrats also hold a roughly 95,000-person advantage over Republicans among active registered voters in Nevada, a big reason why Forgey expects her party will add to victories claimed in 2018’s ‘blue wave’ election.”

SPEAKING OF VOTING BY MAIL — DEMS ARE ENCOURAGING VBM AND CALLING OUT GOP HYPOCRISY. Democrats are holding Trump and Republicans accountable for their hypocritical attacks on voting by mail. Take a look:

From the Oregon Democrats: “In Oregon, we’ve been voting by mail successfully for more than two decades — it’s increased accessibility, it’s given more Oregonians the ability to participate in our democracy, and it’s a safe, commonsense way to conduct an election, especially under these circumstances. The strength and success of our vote-by-mail system shows exactly why the Republican attacks on mail voting are so dishonest and such a transparent attempt to stop more Americans from exercising their constitutional right. The GOP is leveling these dishonest claims for one reason: Trump’s record has hurt hardworking Americans, and they know when more people vote, Democrats win.”

From former Colorado Governor John Hickenlooper in the Washington Post: We’ve been voting at home for six years in my state. It’s time to do it nationally. “The election chaos in Wisconsin on Tuesday sent a clear message: The nation can’t afford a repeat in November. Poll workers, many of them vulnerable senior citizens, and voters were forced to risk covid-19 infection to participate in American democracy, with scandalously long lines at the few polling places that were open in some areas. Gov. Tony Evers (D) had issued an executive order to reschedule the election, but Republicans fought against it and the state’s Supreme Court blocked it.”

More from the DNC’s Voter Protection and Civic Engagement Director on how Democrats will fight back against the new wave of GOP voter suppression: 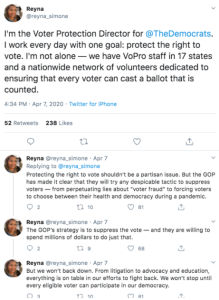 NEW DNC DATA TECH TOOL, “BLUEPRINT” AIMS TO GIVE EDGE TO CAMPAIGNS. Read some highlights of the new program in Protocol:

“After three years of relentless attacks on working families’ health care, Latino communities were already vulnerable to a health crisis. Trump’s mismanagement has only put families in greater danger, from insufficient testing to a severe shortage of personal protective equipment for health care workers. And while Trump continues obsessing over how his rich and well-connected friends are doing.”