IT DIDN’T HAVE TO BE LIKE THIS. DEMOCRATS DECRY TRUMP AS NATION HITS 100K CORONAVIRUS DEATHS. As the United States surpassed 100,000 coronavirus deaths this week, Democrats across the battlegrounds called out Trump’s ineffective, failed response to the pandemic that’s led our country to this devastating milestone.

In Michigan: Michigan Democratic Party Statement on 100,000 COVID-19 Deaths: “If we had leadership in the White House who acted when warned in January, we could have avoided this horrific threshold. Instead, our country is muddling through a once-in-a-generation pandemic with a president in Donald Trump who is more interested in his latest Twitter feud than saving the lives of countless Americans.”

In Nevada: @WillMcCurdyII: “100,000 American lives have been lost to this virus because Trump failed to act. This loss is difficult to comprehend, but we will not forget. Trump’s failure will forever be a stain on our country. It’s time we elect a president who will take responsibility for our lives.”

In North Carolina: NCDP Statement on U.S. Coronavirus Death Toll: “Now more than ever North Carolinians need a president who can lead us out of the hole the Trump administration has dug — someone who will trust experts, facts and science as we look to protect the public, reopen our country and revive our economy. Joe Biden has shown he will be the president who meets the moment.”

In Pennsylvania: PA Dems Chair Statement Mourning 100k U.S. Coronavirus Deaths: “Even as 100,000 of our fellow Americans fall victim to this pandemic, Trump still hasn’t learned his lesson. He continues to ignore medical experts and put more lives in jeopardy by pushing states to rapidly reopen without the testing they need to do so safely. We deserve far better than his chaotic leadership in a time of crisis.”

In Texas: 100,000: “Texans and Americans deserve competent and empathetic leadership. We need elected officials who understand the tragedy that our communities are facing. Trump, Abbott, Cornyn, and the rest of the Trump Republican Party have failed our families.”

In Virginia: DPVA Chair Condemns Trump Administration As COVID-19 Deaths Top 100,000 In The United States: “If Trump had heeded the warnings of his advisors in the early weeks, tens of thousands of lives could have been spared. Instead, he ignored the problem and failed to deliver testing, supplies, and guidance that could have saved lives. Other countries avoided the worst of this virus by acting quickly and following scientists’ advice. Donald Trump did not.”

In Wisconsin: DPW Statement on 100,000 Coronavirus Deaths: “We have hit an inconsolable bench mark in the COVID-19 pandemic — 100,000 of our family members, friends, and neighbors have perished from this deadly disease. What makes this all the more painful is that it didn’t have to be this way. But here we are because Donald Trump didn’t take this crisis seriously from the outset. Even when he did start facing the reality of this crisis, he botched every necessary step to contain the virus.”

NEW TODAY IN THE  CAPITAL-STAR: OP-ED: THE TRUMP ADMINISTRATION FAILS PA BY LEAVING MINORITY-OWNED BUSINESSES BEHIND. “As usual, the Trump administration was more concerned with helping rich corporations than working people. And true to the axiom of Black folks’ pneumonia, 90% of businesses owned by people of color have been and will be shut out of PPP loans.”

DEMOCRATS CALL OUT TRUMP FOR NOT PROTECTING SENIORS DURING CORONAVIRUS PANDEMIC. As multiple stories detailed how Trump’s failed coronavirus response is causing him to continue “hemorrhaging” support from seniors, this week Democrats across the battlegrounds joined with older Americans to slam Trump for failing  seniors during the pandemic—and for his broader agenda that’s jeopardized programs like Medicare and Social Security. Take a look:

Florida Politics: Democrats say Donald Trump’s COVID-19 testing guidance for nursing homes is too little, too late. “Nearly half of Florida’s COVID-19 deaths are linked to residents and staff at long-term care facilities. On Thursday, the Florida Democratic Party argued the Donald Trump administration bears the brunt of the blame. Earlier this month, the federal government advised that all residents and staff at nursing homes nationwide should be tested if those facilities are to begin a transition back to normalcy.”

Concord Monitor: State’s seniors deserve more – and better. “President Donald Trump’s response to the COVID-19 pandemic has failed to protect one of our most at-risk populations: seniors. The disastrous federal response, coupled with not supporting establishments serving seniors, increased the rate of infections and deaths in older Granite Staters.”

Pennsylvania: Reading Eagle: Berks Democrats criticize Trump for not protecting seniors during coronavirus pandemic.: “Dean drew on that experience as she spoke with reporters on a conference call organized by the Pennsylvania Democratic Party on Thursday afternoon slamming President Donald Trump for his handling of the global health crisis.”

Wisconsin: US News: A Senior Moment:  “‘Seniors are more likely to be the people who read the obits,” said Gary Mitchell, president of the Wisconsin Alliance for Retired Americans. ‘There’s a little trauma every day when people look at the obits and see so many of their colleagues or friends or family. Every time, you’re wondering whether it was related to COVID and whether the person died alone,’ Mitchell said during a conference call about Trump’s health care policy and its impact on seniors.”

WHEREVER TRUMP GOES — WE’LL BE THERE TO HOLD HIM ACCOUNTABLE. As Trump and his administration continues to use the pandemic as an excuse to campaign across the nation, Democrats were there to hold him accountable for his failed Coronavirus response and legacy of broken promises that continue to leave Americans in the dust.

IN FLORIDA: Miami Herald: “Florida Democratic Party Chairwoman Terrie Rizzo dismissed Trump’s visit Tuesday as politics as usual. ‘While we celebrate the SpaceX launch and are grateful it’s taking place in our state, let’s be clear that Donald Trump is not coming to Florida because the success of this mission depends on the president’s presence — he’s coming to campaign in the largest battleground state in the country,’ Rizzo said in a statement.” 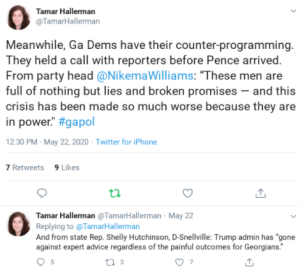 IN MARYLAND: CNN: Baltimore mayor says Trump sending ‘bad, bad message’ with plan to visit on Memorial Day. “‘I’m asking the President to rethink his trip. It sends a bad, bad message to the citizens of Baltimore because I’m asking them to stay home and only come out for essential reasons,’ Baltimore Mayor Bernard ‘Jack’ Young told CNN’s ‘Inside Politics’ on Friday.”

IN PENNSYLVANIA: Pennsylvania Democrats: “The Trump administration did not cause the coronavirus, but their failure to take it seriously has led to the deaths of thousands of Pennsylvanians. Despite Trump’s claims, frontline workers still don’t have the PPE they need and his administration still hasn’t delivered on their promise to supply the testing needed to reopen fully and safely. To make matters worse, Trump and Azar have continued their relentless attacks on protections for people with pre-existing conditions at a time when Pennsylvanians are facing a once in a generation crisis. Trump and Azar own these failures. They should get to work instead of showing up to Pennsylvania for another photo op.”

AS TRUMP TRIES TO GLOSS OVER HIS FAILED CORONAVIRUS RESPONSE — DEMOCRATS WILL BE THERE EVERY STEP OF THE WAY TO MAKE SURE VOTERS KNOW THE TRUTH. In the battlegrounds, Democrats aren’t letting Trump sugar-coat his failed response to the pandemic.

In New Hampshire: Concord Monitor: Lessons from the COVID-19 classroom. “In the midst of this horrific crisis affecting the health and financial well being of millions of Americans, the response by the Trump administration and Republicans in Congress has been to make it more difficult for laid-off workers who have lost their employer-sponsored health insurance. […] At the same time, the administration continues to support the Republican lawsuit to overturn the ACA. Without available, affordable health insurance, the effect on millions of Americans is devastating and unacceptable.”

In North Carolina: ICYMI: Rep. Adams Tears Into Trump Administration For Failing to Protect Workers from Coronavirus. “‘The COVID-19 pandemic has resulted in the worst worker safety crisis in OSHA’s 50-year history. Nothing compares,’ said Rep. Alma Adams (NC-12). ‘Yet OSHA, the agency that this nation has tasked to protect workers, has been largely invisible. It has failed to develop the necessary tools it needs to combat this pandemic and it has failed to fully use the tools it has; instead focusing principally on issuing press releases and voluntary guidance.’”

DEMOCRATS ARE BEATING REPUBLICANS ON VIRTUALLY EVERY FRONT. Democrats across the battlegrounds are continuing to travel (virtually), meeting with voters and ensuring that Democrats are victorious on Election Day. Take a look:

In New Mexico: New Mexico Democrats: DPNM Chair Wraps Up 33 County Virtual Tour With Stop in Valencia. “Democratic Party of New Mexico (DPNM) Chair Marg Elliston this week wrapped up her 33 county virtual tour with a stop in Valencia county. […] Over the last month and a half, Chair Elliston met with Democrats from every New Mexico county through Zoom meetings. She used this tour as an opportunity to share DPNM initiatives related to upcoming primary elections, campaigning during COVID-19, and delegate selection.”

In Maryland: Maryland Matters: Md. Dems plan celebrity-studded virtual rally, week of action ahead of primary. “‘This is big time,’ said Yvette Lewis, chairwoman of the Maryland Democratic Party. As of Monday morning, almost 1,000 people had signed up to attend the rally, and other state parties, she said, are looking to replicate the Maryland event.”