“PLAYED”: DEMOCRATS PUMMEL TRUMP ON TRADE FAILURES. This week, the DNC released a new ad in Pennsylvania, Michigan, Wisconsin and nationally on Trump’s failed trade war with China, and Democrats across the battlegrounds slammed his broken promises on trade and the devastating impacts on American workers and farmers.

CNN: Democrats Go On Offense Against Trump On Trade And China.

Pittsburgh City Paper: “The ad calls out Trump for claiming that he would ‘get tough on China’ but notes that instead ‘he got played,’ while using images of Trump and Chinese President Xi Jinping. It cites a 2018 PennLive report that interviews several Pennsylvania farmers that have decried Trump’s tariffs and how they have hurt their industry, including soybean farmers.”

CBS 21: Elizabeth Warren: “As we face these crises, one thing is certain: Donald Trump is unprepared and incapable of leading this country through crises.”

CBS 21: Tom Perez: “You now have an administration that left small businesses behind. […] That’s the difference between Joe Biden and Donald Trump, Joe Biden is looking out for everyday Americans.”

Lancaster Farming: Will Farmers Trust Trump on Trade? “A new campaign ad shows Trump with a smiling Xi Jinping, China’s leader, and says, ‘We can’t afford four more years of losing.’ The spot will be targeted to swing states including Pennsylvania. Tom Perez, the chairman of the Democratic National Committee, said the agreement has failed to bring exports back to where they were before the trade war, and that Trump chose his negotiation tactics poorly.”

CBS News: “The DNC Wednesday will also be releasing a Pennsylvania-specific version of the ad which will highlight the impact of the president’s trade policies on workers and farmers in the battleground state. It’s part of a new push to highlight the President’s record on trade and China nationally and in key states. The DNC says the ad will run in Pittsburgh as part of their six-figure campaign over five weeks to hold Mr. Trump accountable.”

WI AFL-CIO Secretary-Treasurer Dennis Delie in the Wisconsin Examiner: Trump has betrayed working people in Wisconsin: “During the 2016 campaign Donald Trump promised working class Wisconsinites — the very people I represent — that he would have our backs. But every action he has taken as president has left us behind, and now our lives are harder than ever. Now, as the country grapples with a jobs crisis Trump exacerbated, he claims it’s the fault of anyone but him.”

CBS 5: Tom Perez: “Farmers aren’t over the hump, farmers are over the barrel.” 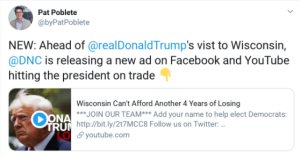 Fox 2: MI Dems Chair Lavora Barnes: “This president stood in Michigan and said to the Michigan workers: you will see more jobs, you will see no plant closing. And, he broke those promises almost immediately upon taking the presidency.”

ABC 57: Pete Buttigieg: “I’m a little bit surprised at how brazenly he has broken his promises to the very American workers and American farmers that he claimed to speak to and for when he ran for president and since he took office.”

HEALTH CARE, HEALTH CARE, HEALTH CARE! — TRUMP BLASTED FOR ATTACKING ACA AMIDST WORSENING PANDEMIC. As Trump and Republican-led states filed briefs at the Supreme Court to strike down the Affordable Care Act, Democrats across the battlegrounds slammed the GOP for pushing a toxic health care agenda that threatens coverage, spikes costs, and jeopardizes protections for Americans with pre-existing conditions — in the midst of a global pandemic.

Check out a lot more HERE!

“DOOM”: TRUMP’S DISASTROUS WEEK IN FLORIDA. From angry voters to growing organizing disadvantages, things keep getting worse for Trump in the Sunshine State.

Newsweek: Florida’s Seniors, Latinos Are Losing Faith in Trump, Dooming His Campaign. “Seniors and Latinos in the battleground state Florida have lost faith in President Donald Trump’s performance, and with double-digit deficits in his national polling, it signals doom for his campaign. Democrats, it appears, have found their opening.”

Politico: Trump’s Maduro comments create political mess in must-win Florida. “The mere flirtation with diplomatic talks with Maduro could hurt Trump’s standing in the nation’s largest swing state, which he needs to win in November in order to return to the White House for a second term.”

HOLDING TRUMP ACCOUNTABLE. Wherever Trump and his cronies go, Democrats are calling out his broken promises.

“‘Donald Trump told Ohioans, he told folks in the Valley, ‘Don’t move. Don’t sell your homes. It was all coming back,’ but that’s exactly what so many folks have had to do,’ said David Pepper, chair of the Democratic Party in Ohio.”

Associated Press: “State Democratic Chairman David Pepper called the visit a ‘photo op’ in an area where Trump failed to keep promises to 1,700 GM workers displaced by the plant’s closure.”

KYMA: Arizona Democrats opposing President Trump’s visit to Yuma. “As President Trump arrived in Yuma Tuesday morning, Arizona Democrats hosted a webinar voicing their opposition to the President’s visit, as Arizona becomes a hotspot for coronavirus. […] All of the leaders on the webinar made it clear they didn’t believe President Trump should be visiting the border during the current crisis Arizona is facing. DNC Chair Tom Perez began the discussion with, ‘Donald Trump is taking his broken promises tour to Arizona. A state that is ground zero for his failures of leadership.’”

KAWC: Arizona Democrats Voice Opposition To President Trump’s Border Security Visit. “During the conference call with local Democrats, Yuma State Representative, and minority leader in the Arizona House, Charlene Fernandez, said the President’s more frequent visits to Arizona are because he is concerned Democrats could flip the state blue in 2020. ‘We know his numbers are slipping here.  We know that Democrats are energized and ready to come together behind one of the best presidential candidates we’ve ever seen,’ Fernandez said.”

Tucson Sentinel: “Democratic Party Chairman Tom Perez criticized the president in a Zoom news conference a few hours before the rally. ‘Over 1,300 Arizonans have already lost their lives, and today Trump is coming into town for a pep rally. What a disgrace,’ Perez said. ‘He should be visiting health care providers and other front-line workers. This is the wrong time and the wrong place to bring together people for a political vanity process.’”

Gray TV: “State Democratic party leader Ben Wikler claims the visit is intended to distract voters. ‘He is desperate to change the subject,’ said Wikler. ‘The jobs that have been lost across the state, in our agricultural and industrial sectors, are not going to be rushing back.’”

WTMJ: “But the Democratic Party of Wisconsin says the Trump Administration has not delivered. ‘From failing to provide adequate PPP loans to black-owned businesses, relentlessly attacking protections for people with pre-existing conditions, and creating an economy where the Black community isn’t given the same opportunities to get ahead, Trump and Pence have proven that their toxic agenda isn’t designed to work for Black Wisconsinites,’  said party Vice Chair Felesia Martin.”

GA Dems: Ahead of DeVos Visit, Georgia Democrats Slam Trump’s Broken Promises. “Betsy DeVos can’t spin Donald Trump’s record of broken promises. In the midst of his failed pandemic response, Trump and DeVos are using this crisis to push a disastrous anti-education agenda and deny basic protections to survivors of sexual assault on college campuses. We deserve leaders who will stand up for Georgia’s students — not serve a handful of well-connected interests. That’s why Georgians are mobilizing like never before, it’s why we’re going to put an end to this failed presidency, and it’s why we’re going to send Joe Biden to the White House.”

FL Dems: “Chad Wolf can’t spin his boss’ disastrous record. As our country united to demand change following the murder of George Floyd, the Trump administration dog whistled to white supremacists, ignored systemic racism in law enforcement, and sicced the US military on peaceful protesters. Floridians deserve better — Joe Biden has been addressing these problems head on and is exactly the type of compassionate, thoughtful leader we need in the White House.”

TESTING SLOW DOWN HAUNTS TRUMP ACROSS THE BATTLEGROUNDS. Trump’s failed pandemic response continues to hurt him with battleground voters, even drawing fire from prominent Republicans.

Reuters: Approval of Trump’s coronavirus response sinks to lowest on record amid surge in cases. “American approval of President Donald Trump’s handling of the coronavirus pandemic has dropped to the lowest level on record, the latest Reuters/Ipsos opinion poll shows, as new COVID-19 cases surged and Trump was widely criticized for suggesting he wanted to slow down testing.”

Houston Chronicle: ‘Risk that is not worth taking.’ Sens. Cornyn, Cruz urge feds to keep supporting COVID test sites. “Texas U.S. Sens. Ted Cruz and John Cornyn are urging the Trump administration not to pull federal support from four testing sites in Harris County, saying it’s ‘a risk that is not worth taking’ as coronavirus cases surge. The pushback from the two Republican senators and Trump allies amplifies the outcry against the administration’s plan to stop providing funding and resources to seven testing sites in Texas at the end of the month.”

Union Leader: Trump failed the COVID-19 test. “Now he wants to limit testing and pack people into rallies, largely unmasked, because he doesn’t wear one. […] His disdain for anything that impacts his reelection chances regardless of impacts to our citizens should give pause to anyone thinking of voting for him in November, especially if you are an older American.”

NCDP Communications Director Austin Cook in High Country Press: “‘From day one, this president has not taken the threat of COVID-19 seriously, and people across our state have paid the price for his inaction and incompetence. Ramping down the federal government’s response to this pandemic is nothing short of admitting defeat and leaving millions of North Carolinians at risk.’”

ON THE (VIRTUAL) CAMPAIGN TRAIL: DEMOCRATS CONTINUE RAMPING UP FOR THE FALL.