A WEEK OF CONTRASTS: BIDEN ROLLS OUT CAREGIVING PLAN WHILE DEMOCRATS CALL OUT TRUMP’S FAILURES. This week, as Joe Biden unveiled his plan to build a robust 21st century caregiving and education workforce, Democrats across the battleground states slammed Donald Trump’s broken promises to seniors, working parents, and caregivers.

Rep. Ann Kirkpatrick: “Trump’s disastrous pandemic response left older Americans to fend for themselves and now, Arizona’s seniors are paying the price. As the coronavirus outbreak continues to hit seniors hard, Trump has utterly failed to prioritize quick testing and necessary protective gear for health care workers who are on the frontlines of fighting this deadly virus.”

Florida Democratic Party Chair Terrie Rizzo: “Trump never delivered on his promises to address child care costs, is recklessly demanding schools reopen amidst the raging coronavirus pandemic, and has utterly failed to deliver the PPE and testing nursing homes needed to keep their staff and residents safe. Enough is enough. Floridians deserve a leader capable of following through on his promises and prioritizing our caregivers — that leader is Joe Biden.”

Gloria Jenkins, Chair of the Democratic Party of Georgia Seniors Caucus: “He has continuously downplayed the threat of coronavirus and proposed cuts to Medicare and Social Security even after vowing to protect them. We deserve better, and Trump’s broken promises to older Georgians are going to hurt him at the ballot box. We deserve a president who respects and fights for those who have spent their lives building our country and raising our families.”

Minnesota DFL Party Chair Ken Martin: “Our state is experiencing a caregiving crisis, which has only been exacerbated by the coronavirus pandemic and Trump’s disastrous response. Trump failed to deliver on his childcare promises, failed to secure real progress on paid family leave, and is now pushing all schools to fully reopen, but has no plan on how schools, teachers, and caregivers can do so safely.”

Nevada State Democratic Party Chair William McCurdy II: “Home means Nevada to thousands of home care workers facing long hours and low wages, and these conditions have only been exacerbated as they serve on the frontlines of the fight against the coronavirus.”

New Hampshire Democratic Party Chair Raymond Buckley: “Trump’s tax scam took money out of the pockets of working parents, and since the outbreak, his administration has only made it harder for Granite Staters to make a living while taking care of their kids.”

North Carolina Democratic Party Communications Director Austin Cook: “Donald Trump’s empty promises to reduce the cost of child care show exactly how detached he is from the struggles of everyday Americans. The high costs of quality child care and early development programs hurts our children, prevents parents and guardians from entering the workforce, and leaves millions of families in financial uncertainty.”

Ohio Democratic Party Chair David Pepper: “Even in the midst of a global pandemic, Trump has continued making it harder for working parents to take time off and care for their families. Ohioans deserve better than his broken promises.”

Pennsylvania Democratic Party Spokesperson Andres Anzola: “Since his first day in office, Donald Trump has put the interests of the wealthiest Americans and large corporations before the needs of working families, our parents, and our children … Pennsylvanians deserve better than Trump’s failed, ineffective leadership.”

Texas Democratic Party Executive Director Manny Garcia: “For four years, Donald Trump has left working families across Texas out to dry. As a candidate, Trump vowed to lower child care costs but he has utterly failed to deliver at every turn. Now, as coronavirus cases continue to surge across Texas, working families are paying the price as they struggle to juggle the responsibilities of care.”

Democratic Party of Virginia Executive Director Andrew Whitley: “Donald Trump promised to stand up for working families. But for three and a half years, he has continued to put himself and his rich friends first … Virginia saw through Donald Trump’s empty rhetoric in 2016, and this November, we’re bringing an end to his broken promises.”

Democratic Party of Wisconsin Spokesperson Philip Shulman: “Older Americans deserve to live their lives with dignity and respect, instead of living with the threats of Trump’s heartless policy goals. He doesn’t care about the well-being of older Wisconsinites and they see just how dangerous another four years of his presidency would be for them.”

BATTLEGROUND DEMOCRATS SLAM TRUMP’S BROKEN PROMISES — AND A BUNGLED BUS TOUR. Wherever Trump and his cronies go, Democrats will be there to hold them accountable. See for yourself:

Triangle Business Journal: “Not everyone is excited about Trump’s trip, however. Late Thursday, the North Carolina Democratic Party put out a statement, attributed to its communications director, Austin Cook. ‘That Donald Trump will visit North Carolina just after the state surpassed 100,000 coronavirus cases is a fitting visualization of his failure to contain this pandemic,’ the statement reads.”

WTVD: “That Donald Trump will visit North Carolina just after the state surpassed 100,000 coronavirus cases is a fitting visualization of his failure to contain this pandemic. Small businesses across the state have shuttered and hundreds of thousands of North Carolinians remain out of work because of the Trump administration’s mismanagement of the crisis, and no photo op can change those facts. The Trump legacy will be one of sheer incompetence, and in just over 100 days, voters here will reject it.”

CO Dems: “Ivanka Trump and David Bernhardt’s photo ops can’t spin Donald Trump’s disastrous record on child care and public lands. Four years ago, Trump pledged to lower child care costs, but he has utterly failed to deliver at every turn — and now hardworking families across Colorado are paying the price. Meanwhile, Bernhardt’s political stunt will do nothing to change his boss’s toxic environmental agenda, which has wreaked havoc on the public lands that millions of Coloradans cherish so deeply.”

In Maine and New Hampshire:

WCSH: Freeport brewery cancels Women for Trump event after supposedly being misled by campaign. “‘This event that was kind of snuck up on us was not supposed to be a political event. From what we understood it was a group of women traveling on a Trump bus that wanted to come in and grab a beer.’”

WABI: “Maine Democratic Party Chair Kathleen Marra said of the situation, in part, ‘While the rest of the country deals with the fallout from Trump’s failed coronavirus response, the Trump campaign can’t even get a photo op right.’” 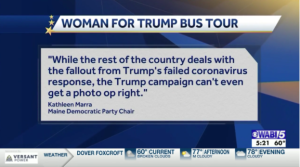 WMUR: “The New Hampshire Democratic Party criticized the tour in a statement from communications director Holly Shulman: ‘No amount of out-of-state Trump boosters can hide the fact that Donald Trump has broken virtually every single promise he’s made to New Hampshire women.’”

IN Dems: Pence can’t spin Trump’s incompetence with another photo op. “Hoosiers deserve a president who will work every day to protect the health of our students, teachers, and families. Instead, Donald Trump has ignored CDC guidance, demanded that schools reopen without essential safeguards, and even threatened to withhold the education funding that we need to keep kids safe.”

OH Dems: “Donald Trump and Betsy DeVos have no idea what they’re doing and no real plan to reopen our schools safely. … Betsy DeVos has been a disaster for public education and removing her as education secretary is one more reason we have to defeat Trump this November.”

OH Dems: “Seema Verma is coming to Ohio today to hold a photo op to distract from the Trump administration’s abject failure.”

New York Daily News: AFT President Randi Weingarten: Betsy DeVos vs. public school teachers and families. “Whatever goes on in DeVos’ closed-door meeting Thursday, New York’s teachers and students will continue paying the price for her failures. Now more than ever, educators deserve leaders who will have our backs. We deserve advocates in Washington who will deliver the resources and safe classrooms we need to teach our kids. We certainly deserve better than Donald Trump and Betsy DeVos.”

DNC: “In the midst of an unprecedented crisis, South Carolina families need leaders who will put their health and safety first. But instead of doing their jobs, Donald Trump, Mike Pence, and Betsy DeVos are putting politics before the needs of students and teachers.”

DNC: “Pompeo can’t spin his boss’ incompetence with a photo op. From starting and losing a disastrous trade war to groveling for reelection help, Donald Trump has always failed to stand up to China.”

DNC Chair Tom Perez: “From the very beginning of this pandemic, Democrats have put the health and safety of the American people first. Unlike Trump, we followed the science, listened to doctors and public health experts, and worked through plans to protect lives.”

“Y’ALL MEANS ALL:” DEMOCRATS STAND WITH IMMIGRANT COMMUNITIES. In the wake of Donald Trump’s unconstitutional memorandum excluding undocumented immigrants from the census, Democrats across the battlegrounds spoke out:

YOUR WEEKEND READING, COURTESY OF WWII VET AND MICHIGANDER EDWARD GOOD. The Oakland Press: Veteran Backing Biden. “I’m a 95-year-old World War II Veteran and lifelong Republican. In 2016, I supported and voted for Donald Trump. Now, the most important thing I’m living for is to get him out of office and elect Joe Biden president.”